'L'Etat du Ciel' project is a homage to many artists', poets' and philosophers' reflections on the physical, moral and political factors that shape our world. This second part features Hiroshi Sugimoto, Thomas Hirschhorn, Vivien Roubaud, Thomas Teurlai and Tatiana Wolska. 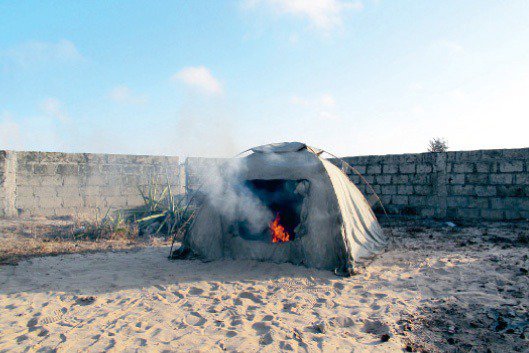 L’État du Ciel is a homage to many artists’, poets’ and philosophers’ reflections on the physical, moral and political factors that shape our world. Over the course of a season, it will present over ten proposals or exhibitions centering on that theme, as artists adopt André Breton’s definition of their role, as applied to Giorgio de Chirico: “The artist, that sentinel on the endless road, always on the lookout.” As far back as Goya, if not further, modern and contemporary artists have attentively examined contemporary reality. They often depict the landscape of our anxieties – dread, alarm, revolt, utopia – and suggest poetic ways of transforming the present. If we study the world as one might scrutinize an image, today stops being an imposed destiny and becomes a changing surface that we could, perhaps, transform.

New exhibition formats stem from these observations, innovative to the extent that the word “exhibition” may no longer apply. Thus, we will see Georges Didi-Huberman transpose the theme of lamentation into the language of film, inspired by Aby Warburg’s Mnemosyne Atlas; Gérard Wacjman and Marie de Brugerolle reflect on the theme of the fall, from the Berlin Wall to the Twin Towers; and Thomas Hirschhorn, with his immense installation Flamme éternelle, which involves nearly 200 intellectuals and poets in a debate focusing on the interconnections between art and philosophy and the ways in which these affect our consciousness.

Add to that ten fictions conceived by Hiroshi Sugimoto on the theme of humanity‘s disappearance, Angelika Markul’s scrupulous exploration of the Chernobyl and Fukushima disasters, David Douard’s viral hybrids of bodies and machines, and Ed Atkins’ digital variations. Each represents a symptom of the world’s general state, focusing on both contemplation and action. L’État du ciel – a title borrowed from Victor Hugo’s Promontoire du songe, in which the author wrote that “the sky’s normal state is at night” – addresses the current time, a political time in which seeing is already a means of action.

Via a body of work in which technical virtuosity is backed by a sound conceptual framework, Hiroshi Sugimoto (b. 1948, lives and works between New York and Tokyo) explores the nature of time and perception, and the origins of consciousness. Among his most famous photographic series, mention may be made of Dioramas (1976-), taken in natural history museums, these photographs depict stuffed animals displayed in artificial habitats, Theaters (1978-), photographed by exposing the photographic film throughout the entire projection of a film, and Seascapes (1980-), which capture the essence of marine landscapes throughout the world, retaining only their
crucial elements, air and water.

“Aujourd’hui le monde est mort [Lost Human Genetic Archive]” is a new facet of a series of exhibitions Hiroshi Sugimoto has been elaborating for about ten years, juxtaposing his collections of objects, coming from a range of periods and cultures, and his photographic works. The objects in his collection are his “doubles,” and are indispensable to the artist as sources of lessons that enable him to renew his art. Drawing on references to Albert Camus’s novel L’Étranger [The Stranger] and Marcel Duchamp’s ready-mades, the artist has staged a world after human beings have ceased to exist: a personal vision of history, seen from the future. The exhibition consists of around thirty scenarios, narrated by different fictitious characters: a bee-keeper, a specialist in comparative religion, and a politician, who choose to preserve (or not to preserve) their individual genetic information for the future.

Devised as a kind of ruin, resonating with the atypical architecture of the Palais de Tokyo, the exhibition is not only the largest the artist has ever staged in Europe, but also a unique project that bears witness to his wide field of activity, ranging from literature to architecture. It is in the image of his attempt to understand art and human history according to a vast time scale that goes well beyond that of the human species, at the same time including science, religion, economics, etc.

Where is this human race heading, incapable of preventing itself from being destroyed in the name of unchecked growth? Guided by this question, Hiroshi Sugimoto lets his imagination and his creativity drift to meet up with both
the past and the future. A.M.
Partners
This exhibition benefits from the support of Fondation Louis Roederer, amanasalto, Japan Foundation, Fukutake Foundation/Benesse Holdings, Inc., Fondation Franco-Japonaise Sasakawa and MARK STYLER, as well as technical support of KORG INC and Horticulture & Jardins.

Most of Thomas Hirschhorn’s artworks play with familiar and urban forms that evoke stalls, flea markets, pamphlets or their mural form in the manner of dazibao in popular China. “Kiosques,” “Monuments,” “Altars,” “Sculptures Directes” [Direct Sculptures] form the artist’s typology of functional or votive apparatus. The “Kiosques” are directly inspired from the propaganda structures developed by Russian Constructivism; the “Monuments” are an homage to the work of great thinkers such as Spinoza, Bataille, Deleuze, Gramsci; and the “Altars” evoke spontaneous urban commemorations. If the “Sculptures Directes” are usually displayed inside the institutions, inspiration for the first version came from the Flame of Liberty (Quai de l’Alma, Paris) appropriated by the public as a votive altar dedicated to Princess Diana.

Thomas Hirschhorn—though he typically rejects calls for retrospective exhibitions—has decided to reactivate the protocol “Presence and Production” for the Palais de Tokyo. Through this process, Thomas Hirschhorn renews with the notion of presence, so problematic throughout successive phases of classic and modern Art History. The usual opposition between the presence of the artwork and the artist in action is no longer relevant.

This piece is open in its form, accessible and free, thereby creating an authentic public space inside the institution made available to a non-exclusive audience, welcoming art-lovers as much as those who do not have a particular inclination towards the aesthetic. Thomas Hirschhorn considers “Eternal Flame” as his own temporary studio, like a welcome center for intellectuals who are left free to consider their intervention or their mere presence outside of any obligation towards the institution to engage in “cultural moderation.” J.F.

Inventing connections, subverting techniques, searching for side effects, this is the relationship that Viven Roubaud (b. 1986, lives and works in Nice) engages in with the systems he creates. Whatever the mechanisms he produces (an explosion of feathers, a pollen storm, dancing brooms, stalactites on an IV, a mobile and pictorial printer…); it is above all their nature that predominates. In most cases, he uses “objects that help us live”—“downgraded” products, as he calls them—that he salvages from their urban abandon and dissects until he has diverted them from their initial use, thereby revealing other uses. They’re like reformulated objects, constructed by occasionally opposing cross-flows and energies. The work reveals itself through repeated observation, tests, trials and accidents.

For his exhibition at the Palais de Tokyo, he uses the building as a medium, first of all revealing the foundations of the ceiling with inverted lighting. By producing exploding fireworks in plexiglass tubes full of oil suspended from the ceiling, the artist imposes time distortion on a split-second process. Finally, saw blades continuously shedding mattresses form strange mechanical ballets that float in the Trois Coupoles space.

This exhibition benefits from the support of Safia El Maqui (Monaco).

Whether he modifies the lighting in a room by pouring motor oil onto a fluorescent tube or causing a soft yet disturbing black snow to fall on a bourgeois interior, Thomas Teurlai (b. 1988, lives and works in Lyon) is always seeking to transform the environment, however minuscule that intervention may be. Through installations that divert objects from their original function and lead them to poetic and ambivalent new uses, Thomas Teurlai makes the coldest materiality sublime. His work provokes a certain aesthetic pleasure through the familiarity of the presented objects while at the same time causing a sense of doubt with regard to the effect produced by this play on opposites and assemblages.

At Palais de Tokyo, as always in his work, the notion of risk is present, suggested or accepted. The tension is palpable for the visitor who is never far from danger: whether through the muffled vibrations of a glass window or the mysterious technology mimicking a ghost train in the depths of the building, the work of Thomas Teurlai resonates like a form of world re-enchantment.

An economy of means and simplicity of the gesture are the foundation of the sculptural work of Tatiana Wolska (b. 1977, lives and works in Nice). Her slow and painstaking practice sublimates the simplicity of the materials—recycled waste materials, always—in order to bring out their poetry. Wood, plastic or metals are among her substances of choice and are used to make organic-looking sculptures that contradict the material’s original use. For instance, a bottle of Badoit becomes a proliferating form, or myriads of small nails turn into a cloud hung up in a corner.

For her exhibition at the Palais de Tokyo, Tatiana Wolska presents a series of recent or previously unseen works. Though very different in nature, their confrontation enters a dialogue with the architecture of the place, tailoring itself to the location’s features. A host of drawings on the walls, silent works, face a system for listening to insects. A cloud of molten plastic recalls a cluster of nails wrapped around a concrete column. With the offcuts and remainders from previous exhibitions, the artist creates a quasi-organic sculpture that cuts through walls. A line of level nails on the only wall that goes through the various exhibition areas provides the space with overall consistency.

This exhibition benefits from the support of Safia El Maqui (Monaco).