With 'Hustlers' series, Philip-Lorca diCorcia features male prostitutes photographed along Santa Monica Boulevard and nearby neighborhoods. Peter Fischli and David Weiss' exhibition is conceived as a single installation, with the gallery transformed to resemble a nondescript suburban work- and storeroom. The gallery concurrently presents the solo exhibitions by Reinhard Mucha. 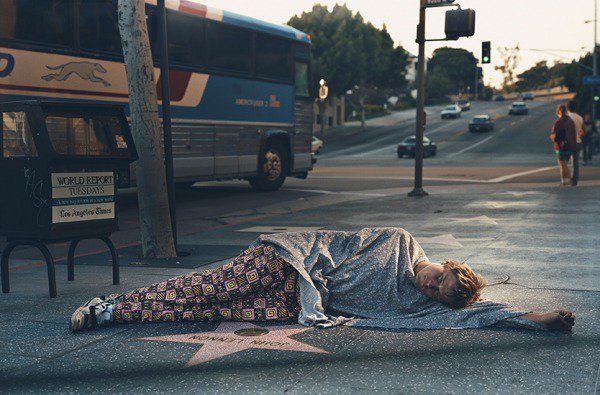 In the early 1990s, Philip-Lorca diCorcia made five trips to Los Angeles, where he drove along Santa Monica Boulevard and nearby neighborhoods on the lookout for male prostitutes. The artist would then strike a deal: he offered each prostitute his normal rate, asking only to take their photograph. The resulting series, today called Hustlers, was both a breakthrough for the artist and a key episode in the now familiar mode of photography that occupies a semi-fictive space between street and stage. The historical specificity and taxonomic impulse of the project are declared in the title of each photograph: the subject is identified by his name, age, place of birth, and the money he received for agreeing to pose.

Philip-Lorca diCorcia predetermined each setting, posing his assistant to prepare the lighting and set up before returning with a man to make the final photograph. Hotel rooms, parking lots, curbs, cafes, backyards and bus stops all offer potential backdrops for the pictures. Chris, 28 years old, Los Angeles, California, $30 (1990-92), shows a man seated on an elevated motel walkway, the metal guardrails receding into space, his arms reaching up to clutch the highest rail. He might be lost in thought, yet the picture also conveys a sense of entrapment. Tim, 27 years old, Orange County, California, $30 (1990-92) depicts a shirtless man bathed in warm light, gingerly approaching an open door as if he couldn’t quite tell whether it offered an escape or an alluring dead-end. The subjects convey a range of emotions or attitudes, from dignified beauty to desperation, lending poignancy to the elegiac mood of the series.

Conceived amid the AIDS crisis and during the ‘culture wars’ of the early 1990s, an era fuelled by the censorious rhetoric of figures such as Jesse Helms, the photographs come out of a particularly tense historical moment. In 1989, diCorcia received a grant from the National Endowment for the Arts, and this money allowed him to embark on the Hustlers project, not to mention pay the prostitutes in the photographs. "None of these guys were free", writes diCorcia in a new steidldangin book to mark the twentieth anniversary of the first exhibition of Hustlers, at MoMA, in 1993. "They charged for their services, for a faked sense of what passes for intimacy in the realm they left behind. They barely found a place to sleep or get high afterwards, but they accomplished the most sublime trade, their artistry: Nothing for Nothing. That's what was so perfect for me. It summed it all up."

Philip-Lorca diCorcia (born 1951, Hartford, USA) studied at the School of the Museum of Fine Arts, Boston, and at Yale University, where he is currently a Senior Critic. He was awarded the Artist Fellowship of the National Endowment for the Arts three times, as well as the Infinity Award for Applied Photography by the International Center of Photography and the Eisenstaedt Award by Life Magazine. Solo exhibitions include the Hepworth Wakefield (2014), Schirn Kunsthalle Frankfurt and Museum de Pont, Tilburg (both 2013), the LACMA, Los Angeles (2008), the Institute of Contemporary Art, Boston (2007), the Museo Nacional Centro de Arte Reina Sofía, Madrid (1997), and MoMA, New York (1993). His series A Storybook Life was exhibited at Whitechapel Art Gallery, London, before travelling to the Centre National de la Photographie, Paris; Museum Folkwang, Essen, Germany; Magazin 3, Stockholm Konsthall; Fondazione Bevilacqua La Masa, Venice, and the Centro de Artes Visuais, Coimbra, Portugal, in 2003/2004.

Philip-Lorca diCorcia will discuss his work with the cultural critic and writer Ulf Erdmann Ziegler at the American Academy, Berlin, 7:30 pm, 30 April 2014.

The making of polyurethane objects has played a central role in the work of Peter Fischli and David Weiss for over 30 years. The objects themselves often depict utilitarian devices, tools or other everyday paraphernalia, all handcrafted and painted to be alsmost indistinguishable from the original. Boris Groys wrote that the practice of making the objects revives "the ethos of the artist as a working, creating craftsperson who once again represents the things of reality." Yet the exhibition of the polyurethane objects as artworks, carefully presented as if they were just mundane things, introduces layers of paradox, irony and humour.

The exhibition at Sprüth Magers Berlin is conceived as a single installation, with the gallery transformed to resemble a nondescript suburban work- and storeroom. The space appears to be a purgatory of forlorn and forgotten things, a place for objects to collect dust before being reused or discarded. Palettes, an old phone, keys, cigarettes, a bottle, a shoe, a chain saw and a dusty keyboard, among many other objects, are all placed in the room as if abandoned, their usefulness exhausted. Each one of the objects was made at some time over the past 30 years and each one was kept back in the studio, surplus to previous exhibitions. The objects themselves are thus cast-offs, divorced from the utility they propose, while as a collection they form a kind of Salon des Objets Refusés of the artist’s previous endeavors. Out of this perfectly calibrated mess emerges a portrait, as precise in its description of a period of time as it is a constant state of mind or being.

Referred to as 'absent' things by the artists, the objects and the installation as a whole play with our perceptions, perverting how we might usually convert visual information into well-grounded beliefs about the external world. The objects look perfectly useful but have no practical purpose or functionality beyond their existence as artworks. Their heightened verisimilitude makes the objects near-perfect facsimiles of the objects they depict, yet they are empty and insubstantial, a condition that serves only to underline the playfulness of the project and the incongruity of the medium. Pure surface, the polyurethane objects evoke utility yet exist only to be looked at by gallery goers. "They’re a bit like will-o-the-wisps," comments Peter Fischli – "there in visual terms but not corresponding in terms of touch. Phantoms."