The exhibition examins the enduring radicality of the painted shaped canvas and introducing such parallel movements as Pop Art and Arte Povera into discussion of the paradigm's place in the history of modern art. 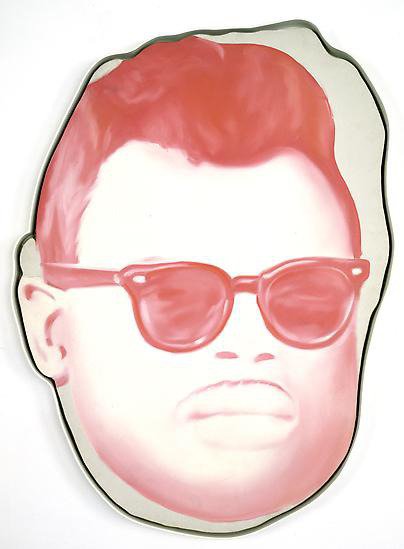 New York, NY…In the early 1960s, the shaped canvas emerged as a new form of abstract painting that reflected the optimistic spirit of a postwar space-race era when such forms as parallelograms, diamonds, rhomboids, trapezoids, and triangles suggested speed and streamlined stylization. The shaped canvas is frequently described as a hybrid of painting and sculpture, and its appearance on the scene was an outgrowth of central issues of abstract painting; it expressed artists’ desire to delve into real space by rejecting behind-the-frame illusionism. The defining moment for the paradigm occurred in 1964 with The Shaped Canvas, an exhibition at the Solomon R. Guggenheim Museum, curated by influential critic Lawrence Alloway with works by Paul Feeley, Sven Lukin, Richard Smith, Frank Stella, and Neil Williams. Alloway’s show defined a key feature of abstraction and revealed the participating artists’ desire to overthrow existing aesthetic hierarchies. Half a century later, the shaped canvas remains robust in art, encompassing an array of approaches and provoking questions about the continued relevance of painting.

Coinciding with the 50th anniversary of the Guggenheim Museum’s historic show, Luxembourg & Dayan will present The Shaped Canvas, Revisted, a cross-generational exhibition examining the enduring radicality of the painted shaped canvas and introducing such parallel movements as Pop Art and Arte Povera into discussion of the paradigm’s place in the history of modern art. The exhibition will include more than two-dozen works that connect the postwar history of the shaped canvas to present day practice. Paintings on view range from the two-dimensional shaped format to approaches that burst away from flatness altogether. All of the works in The Shaped Canvas, Revisited take a non-rectangular approach to painting that celebrates perceptual tensions between internal structure and bounding shape; between pictorial and three-dimensional concerns; and between the literal and the illusory. Among artists represented by works in the exhibition are Lynda Benglis, Lucio Fontana, Ron Gorchov, Mary Heilmann, Charles Hinman, Wyatt Kahn, Ellsworth Kelly, Nate Lowman, Olivier Mosset, Elizabeth Murray, Kenneth Noland, Steven Parrino, Pino Pascali, Richard Prince, James Rosenquist, Paolo Scheggi, Frank Stella, Richard Tuttle, and Tom Wesselmann, among others.

On view through July 3rd, The Shaped Canvas, Revisited will be accompanied by an illustrated catalogue featuring an extensive interview with artist Frank Stella by art historian and critic Suzanne Hudson. Like Luxembourg & Dayan’s previous exhibitions Grisaille and Unpainted Paintings, The Shaped Canvas, Revisited will attempt to re-trace a compelling and provocative impulse across generations, nationalities, and artistic movements. Each artist included has been passionately committed to exploring painting in principle and has renewed the form’s potential through experimentation.

About the Exhibition
Beyond Lawrence Alloway’s landmark Guggenheim exhibition, a number of key American shows in the 1960s and 70s – notable among them are Shape and Structure at Tibor de Nagy Gallery (1965), curated by Frank Stella, Henry Geldzhaler, and Barbara Rose; Painting: Out from the Wall at the Des Moines Art Center (1967); and Shaped Paintings at The Visual Arts Museum (1979) -- revealed the prevalence of artistic experimentation and helped situate the shape of painting as a prime arena for formal innovations.
At Luxembourg & Dayan, The Shaped Canvas, Revisited will re-engage with these past exhibitions through key works by artists who participated in them. The show will present such familiar icons as Frank Stella’s glowing copper L-shaped “Creede II” (1961), Elizabeth Murray’s “Twist of Fate” (1979), and Kenneth Noland’s “Midnight” (1979), alongside eccentric shaped works by such figures as Paolo Scheggi and Pino Pascali, who are perhaps less familiar to a New York audience. Pascali’s “Coda di Delfino” (1966) swoops upward from the wall, an ebullient fishtail of black paint and glue on canvas and wood, while the overlapping layers of painted canvas in Scheggi’s “Intersuperficie Curva Blu” (1965) create the impression of cuts that connect his shape-shifting formally with that that of Lucio Fontana. Through such works, the exhibition traces the development of the shaped canvas through parallel threads of modern art, from Minimalism to Pop Art and Arte Povera.

With a group of recent works, Luxembourg & Dayan explores the enduring legacy and conceptual impact of these discrete movements as expressed in the shaped canvas approach. For example, shaped paintings of the last decade – one of these is Olivier Mosset’s “Copper Star” (2008) – call back across the years to Charles Hinman’s “Oceanus” (1981). In James Rosenquist’s “Head on Another Shape: Study for Big Bo” (1966), viewers can locate the antecedents of Nate Lowman’s bullet hole canvas “White Escalade” (2005-2008). Lynda Benglis’ suggestive knots pose as distant ancestors of Justin Adian’s elastic canvases. The Shaped Canvas, Revisited will offer a fresh new lens through which to consider the trajectory of the shaped canvas into the 21st century, and a chance to contemplate this paradigm’s place in contemporary practice, through new, never before exhibited works by several younger artists like Adian, who are re-imagining the possibilities of the shaped canvas today.

Luxembourg & Dayan
64 East 77th Street between Madison Avenue and Park Avenue
The gallery is open to the public Tuesday through Saturday, 10AM – 5PM.