"Confidence-Building Measures" is borrowed from the field of political science and international relations, where it indicates actions taken to reduce tension and minimize suspicion between states. The group exhibition observes the renewed penetration of dance into the museum space. 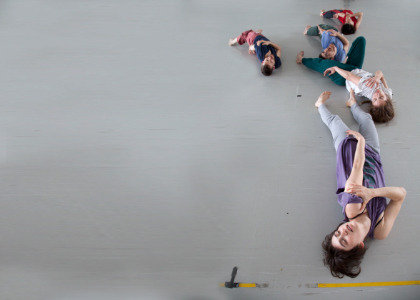 The Hebrew title of the show, "Confidence-Building Measures" ("trust-building steps" in literal translation from the Hebrew) is borrowed from the field of political science and international relations, where it indicates actions taken to reduce tension and minimize suspicion between states. The attempt to arrive at a common denominator and dialogue between ostensibly foreign publics is also the motivating force behind the current exhibition, which transpires on the line between dance and choreography, art and the museum.

The public sphere—and the museum and gallery as a part of it—is not foreign to contemporary dance. Since the 1960s in particular, many choreographers and dancers have challenged previous traditions and performed dance pieces outside the stage, whether in an art museum or on a building's rooftop. A pioneer of this trend in contemporary dance was the Judson Dance Theater, a collective established in New York in 1962, whose founders included renowned choreographers Yvonne Rainer and Trisha Brown. Additional dance practitioners and artists from other fields operated concurrently, among them Merce Cunningham and visual artist Robert Morris.

The exhibition, the first of its kind in Israel, observes the renewed penetration of dance into the museum space today, and strives to direct its gaze at this present moment. It focuses on the choreography's pulse and the stratification of contemporary dance in relation to the museum's white cube, to alternative venues, and to collaborations with visual artists, which facilitate the establishment of language and thought, and the formulation of a new dance discourse. At the same time, this process also calls forth a reconsideration of the museum's status and role.

This channel thus joins an ongoing scholarly process carried out at the Petach Tikva Museum of Art, which has followed artistic practices in the context of social action. Albeit infrequent in contemporary Israeli dance, in these frames dance stands as an equal alongside the visual arts, striving to exhaust the potential inherent in the medium in elucidating and promoting political and social goals.

Based on the two major axes—community and the public sphere—the featured works turn a critical gaze at the body's power and failures; they examine dance as a vehicle for constituting and defining a community, analyze the relationship between spectator, movement, and object, and confront the challenge posed by the moving, living body to the prevalent frames of museum presentation, collection, and archive. The works selected for the exhibition were created by choreographers who have made site-specific works for a museum space for the first time, as well as by visual artists for whom dance is a means for personal reflection or communal action. Simultaneously with the exhibition, activities in the public sphere will be held in collaboration with the Petach Tikva community.