The work, while spanning a variety of mediums and employing an array of technique and points of view are all linked by an ambitious element be it scale, process, subject or context. 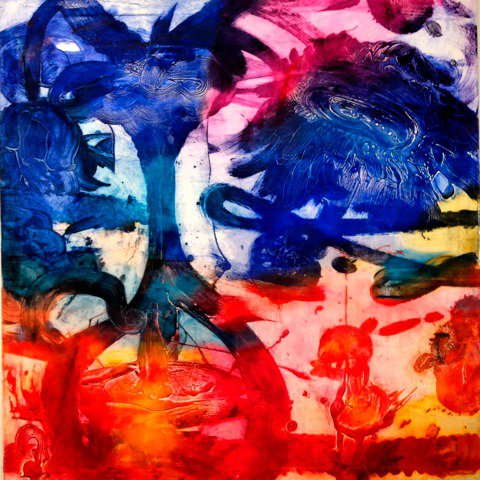 Von Lintel Gallery introduces the entirety of its program in one summer group show. Ambitious. The work, while spanning a variety of mediums and employing an array of technique and points of view are all linked by an ambitious element be it scale, process, subject or context.

Izima Kaoru and Farrah Karapetian draw upon the fantasies (the former) and memories (the latter) of their subjects to create large-format performance portraits. Floris Neusüss abstracts his subjects’ features by exposing their figures directly onto photographic paper whereas Roland Fischer conversely intensifies them, by using their dress, in this case, the habit of a Cistercian monk, as a framing device. Mark Sheinkman’s graphite erasure paintings are created through a subtractive, sculptural process. Klea McKenna builds volume by folding photographic paper while Pierre Cordier & Gundi Falk incise it, combining the materials of painting with the chemistry of photography.

Wendy Small references Victorian lace-making in her photograms composed with artifacts found in her daily life as mother and nurse. Melanie Willhide delicately treats photographs as artifacts themselves, merging the frontside image and backside notation as a nod to the nostalgic narrative we often attach to the medium. Innovative processes such as Rosemarie Fiore’s conceptualization of a firework-wrangling apparatus to build colorful, topographic reliefs contrasts with Tim Maguire’s calculated approach to painting following the CMYK digital printing model. Stephen Ellis transposes musical structure into interlocking grids and fast swipes of color while Canan Tolon infuses the tenets of architectural construction into slices and cuts of paint that somewhat inexplicably approximate the realism of photographic collage.

The paintings of Catherine Howe and Antonio Murado offer a fresh perspective on 17th century still-life and landscape, respectively. Joseph Stashkevetch riffs on drawing and photography; slowly building light and shadow with conté crayon, sandpaper and water washes on rag paper. Valerie Jaudon’s concern with line formally dialogues with Minimalism, Geometric Abstraction and Systems art but as a founding pioneer of the 1970s Pattern and Decoration Movement, her paintings also possess a link to minor forms often marginalized by the dominating art culture at that time.