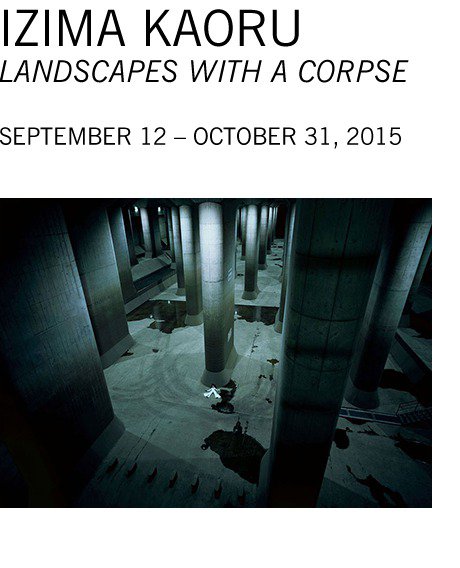 Izima Kaoru: Landscapes with a Corpse

Von Lintel Gallery is pleased to present Landscapes with a Corpse—an exhibition of large format photographs by Japanese artist, Izima Kaoru. The exhibition marks the artist’s seventh solo show with the gallery and his first in the city of Los Angeles.

Kaoru translates memento mori—a medieval reflection on mortality—using the language and style of high fashion editorials. Each picture contains a figure swathed in couture and embedded in a meticulously staged landscape that soon reveals itself to be a dramatically conceptualized death scene.
Sweeping panoramics of iconic architecture and feats of civil engineering distill into intimate close-ups. As an installation, the images string together like frames in a cinematic sequence. The titles comprise the model’s name and the designer of her garment—Alexander McQueen, Gucci, Jil Sander—as a nod to classic vanitas and the pages of Vogue; a publication counted among Kaoru’s vast list of clientele as a fashion photographer. But unlike traditional shoots, the model envisions the narrative and Kaoru builds each tableau according to her own dictation.

He renders the fantasies in intensely saturated hues and arousing detail but stops short of a full transcript. Rather the photographs play as moments of charged stillness that elicit the voyeuristic observer to speculate on the actions recently transpired and the meaning of living a life that inevitably must end.
Izima Kaoru was born in 1954 in Kyoto, Japan. He worked as a fashion photographer until 1993 when he was inspired to create the Landscapes with a Corpse series. He has since shown his work internationally, and his photographs have been featured in numerous publications including The New Yorker, The New York Times, Interview Magazine, Esquire, Aperture and The Huffington Post.
The artist lives and works in Tokyo.

Von Lintel Gallery is pleased to present Boom—an exhibition of new work by artist, Michael Waugh. The exhibition marks the artist’s first solo show with the gallery and in the city of Los Angeles.
Waugh’s ink drawings on mylar utilize imagery constructed entirely out of handwritten text. Hundreds of pages from government reports and theoretical writings about power and capitalism are transcribed word for word into airy, visual compositions that reinterpret 19th century tableaux: stately portraits of horses, cowboys on the homestead, a team of rowers racing down the river.

The white space and sense of lightness in these drawings belie a frenetic surface teeming with cramped, labored handwriting only visible upon close inspection. Occasionally, the tight scrawls unfold into a more generous script. Discernible words and phrases like “CITIBANK” and “clearly illegal” surrender a subtle awareness of the works' larger context, raising questions about the difficult to digest text, in this case—The Congressional Financial Crisis Inquiry Report. The bureaucratic haze of the document is amplified and mirrored in the tension between image and word.

Included in the exhibition is the largest piece the artist has constructed to date: a four panel work measuring fourteen-feet in length. The text is a complete transcription of Pierre Bourdieu's Les régles de l’art—or, The Rules of Art—exploring the interconnection between art and the societal structures within which it is produced and received. Inked by Waugh in the original French, Bourdieu's sociological musings on cultural capital are woven into a street scene of an exploding building, threatening a crowd too distracted to notice.

Michael Waugh was born in Cambridge, MA. He earned his graduate degree in painting from New York University in 2000; but he also has degrees in writing from Texas State University and history from the University of Texas. He has exhibited internationally for the last fifteen years and his work has been reviewed by the New York Times, Art in America and ARTNews. He is the recipient of awards from the New York Foundation for the Arts, The Marie Walsh Sharp Space Program and the Pollock-Krasner Foundation.
The artist lives and works in Brooklyn, NY.