Lisa Oppenheim explores photography's indexical and documentary features and the way in which its technical apparatus is rooted in particular cultural and historical contexts. Karl Larsson mixes an institutionally critical awareness concerning the material and ideological conditions of the work of art. Parabol Art Magazine focuses on the representation of contemporary art in a two-dimensional space. 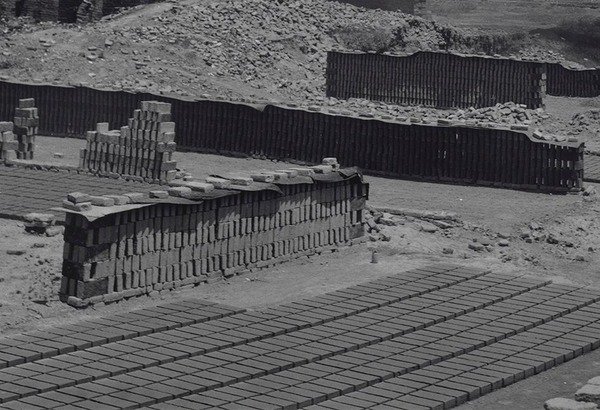 Over the past decade, artist Lisa Oppenheim has steadily developed a unique body of work exploring the use and transformation of pre-existing images. The exhibition, "Forever is Composed of Nows," shows her most recent works. Oppenheim's examination of photography is conceptual: her work engages material and techniques of the medium to question the conditions of image production. She explores photography's indexical and documentary features and the way in which its technical apparatus is rooted in particular cultural and historical contexts. For her exhibition at the Kunstverein, Oppenheim introduces new materials such as textiles and ceramics as an extension of her investigation into photographic representation.

The title of the show is a quote by Emily Dickinson and reveals a telling connection to the notion of history in relation to Oppenheim’s practice. While often using imagery from the recent or more distant past, Oppenheim always locates the experience of making and viewing in the present. In La Quema (2014), Oppenheim creates photographs of smoke from a kiln by seminal Mexican photographer Manuel Álvarez Bravo and in a perfomative gesture, re-exposes them to the light from fire, and also extends the representation with a series of ceramic tiles referencing clay native to regions in Mexico. In Jacquard Weaves (2014), jacquard woven textiles are created using digital images from Seth Siegelaub’s textile collection. In this project, she forges a photographic connection between the legacy of conceptual practices and proto-computer technology with conditions of loss and interference in our digital age. Consistently in Oppenheim’s practice representation and artistic process are collapsed. Images are reworked in the light of the literal and metaphorical present. A light in the darkroom produces an image of some other smoke from some other time that bears only a trace resemblance to the source. What matters is what has changed.

Nature is a haunted house--but Art--is a house that tries to be haunted.
(Emily Dickinson)

The exhibition is accompanied by the artist’s first monographic publication developed in collaboration with Grazer Kunstverein and FRAC Champagne-Ardenne and published by Sternberg Press.

Lisa Oppenheim was born in New York in 1975, where she still lives and works. She received her MFA from the Milton Avery Graduate School for the Arts at Bard College in 2002 and soon after took part in the Whitney Museum’s Independent Study Program. From 2004 to 2005 she was a resident at the Rijksakademie van beeldende kunsten in Amsterdam. Her work has recently been exhibited at The Museum of Modern Art, The New Museum, the 21er Haus in Vienna and the Grazer Kunstverein. Upcoming and current exhibitions include the Guggenheim Museum, FRAC Champagne-Ardenne, Deutsche Bank Kunsthalle Berlin, The Art Gallery of Ontario, MASS MoCA, The Israel Museum, and the J. Paul Getty Museum in Los Angeles.

The exhibition is supported by the Ministry of Culture of the Free and Hanseatic City of Hamburg, Rudolf Augstein Stiftung and Adolf Fette GmbH & Co KG.

is it necessary to explain
how human you are
Karl Larsson, Poetical Assumption

How does a work of art begin to signify anything to the beholder? How does its meaning circulate? What narratives support it? Karl Larsson, this year’s Philipp Otto Runge fellow, mixes an institutionally critical awareness concerning the material and ideological conditions of the work of art, with poetic reflections on the existential and emotional prerequisites of artistic creation. In Hamburg, periods, materials and gestures are transferred to a space that describes an actual contemporary language climate: North Western Prose. In this language climate, everything has a function.

The title of the exhibition, "North Western Prose," refers to Buddenbrooks by Thomas Mann, which depicts the capitalistic system of the 19 and the early 20 century. Larsson addresses this topic to contemporary questions: How do we establish a way of life in regard to traditions, economical interests, individual wishes and drastically changing social structures? Literary figures such as Arthur Rimbaud – whose formulation "I is another" marked the beginning of artificial literature –, appear in the exhibition: The silhouette of his head, originally cast from a monument in Charleville, is positioned on the floor and filled up with beach stones. Larsson's several characters – absent bodies but present minds – are in constant conversation.

With “North Western Prose,” Larsson continues his work in the intersecting margins of writing and language, poetry and installation. These diverse positions have coalesced in an artistic practice that can be described as both editorial and literary, but differs from writing in a conventional sense in its focus on spatial experience, embodiment and activism. Like anomalous points on a graph, the works hold together not because of their coherence or the connections among them, but as a result of their underlying order. Larsson's application of poetical methodology to sculptural practice establishes a space between the object and the spectator, who is an active part of the artistic scenario. In doing so, the artist challenges the act of perception and questions existing modes of artistic critique which are already incorporated by capitalism.

This transfer within the exhibition space triggers a certain way of thinking about consumption and value. To criticize is not to pass judgment but to add knowledge. “The exhibition as a cultural form was born when the logic of presentation separated the artworks from their prescribed social destination. The conditions for such breach are not longer present: the contemporary art exhibition is an anachronism” (Kim West). In this setting, thinking can start from a new position.

The exhibition is accompanied by the artist’s first monographic publication developed in collaboration with the Portland Institute for Contemporary Art, which will be published by Mousse Publishing at the beginning of December.

Karl Larsson, born 1977 in Kristianstad, Sweden, is an artist, poet and editor. He divides his time between Malmö and Berlin. As a poet, Larsson has published five books; Form/Force (OEI Editör 2007), Nightsong (OEI Editör 2009), Parrot (Paraguay Press 2010), Poetical Assumption (Torpedo / JvE 2012) and Consensus (the Room) (Paraguay Press 2012). He is part of the editorial board of Audiatur, biennale for contemporary poetry in Bergen, Norway. Larsson has had solo exhibitions at the Index Contemporary Art Foundation in Stockholm, Galerie Kamm, Berlin and the Neuer Aachener Kunstverein. He has also participated in group exhibitions at NGBK in Berlin and Moderna Museet in Stockholm. Upcoming exhibitions include the Portland Institute for Contemporary Art, Portland (USA).

The exhibition is supported by the Ministry of Culture of the Free and Hanseatic City of Hamburg, Philipp Otto Runge Stiftung, iaspis, and MIDAS Metall. Thanks to Galerie Nordenhake.

Parabol Art Magazine is an international periodical for contemporary art, a project by the art consultancy section.a, the design agency section.d and the artist Chris Goennawein. Parabol Art Magazine focuses on the representation of contemporary art in a two-dimensional space. A curator devises each issue. Each curator ́s task is to examine a contemporary phenomenon in pictures and words on the basis of artistic points of view. With its notorious size of almost DIN A1 (folded out), the image itself is the main focus of the publication. The publication is annually published in English in a limited edition of 1.500 copies.