On view will be works dating from the late 1980s to the present. The series Les interdictions en 2014 was produced especially for the exhibition at the K21. In the large-scale installation 'Sous vent', the artist alludes to the forces of nature, but also to the unconscious and to the fears that lurk in the deep layers of the psyche. 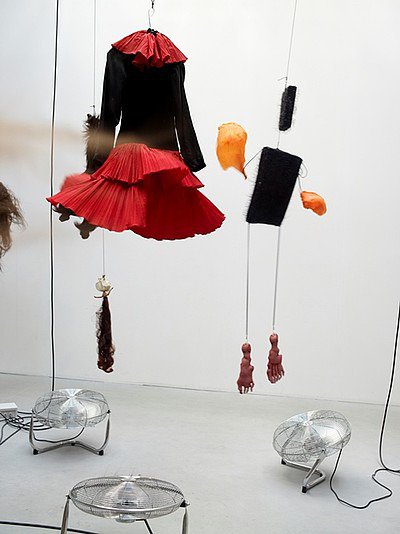 Annette Messager is a key figure on today’s international art scene, an artist whose oeuvre prepared the ground for contemporary French art. Nonetheless, her last solo show in a German museum took place almost 25 years ago. Now, this exhibition at the K21 provides art lovers with an opportunity to rediscover her. On view will be works dating from the late 1980s to the present. The series Les interdictions en 2014 was produced especially for the exhibition at the K21.

The Kunstsammlung Nordrhein-Westfalen purchased the large-scale installation Sous vent (2004–10) in 2011, thereby augmenting its collection with a major position in contemporary art. Diverse objects including an oversized hand, a foot, bodily organs, and plush animals, all covered by a black silk veil that is set into motion by air streams generated by three fans. In this work, the artist alludes to the forces of nature, but also to the unconscious and to the fears that lurk in the deep layers of the psyche. During the exhibition at the K21, Sous vent will be on view in an installation measuring more than 20 meters in length.

During more than 40 years of artistic activity, Annette Messager (born 1943) has developed a highly concentrated visual language. While in the early 1970s, she worked primarily with stuffed birds, embroidery, and collections of images, the spectrum of materials and themes later expanded quickly. Added were photographs, installations with cuddly toys and items of clothing, and beginning in 2001, large mechanical systems as well. Playing a central role for Messager in particular is the human body and its attributes. These are dismembered by the artist, who then twists them together into something new using thread and mesh. Through the accumulation and stringing together of the most delicate elements, Messager generates a visually stunning cosmos.

Among Annette Messager’s recent works is the striking installation Continents noirs (2010–12). Like tiny islands, black, crumpled elements hover in the air. The piece is reminiscent of the setting of a science fiction film, but is also evocative of a bleak future. Inspired by Gulliver's Travels, the work’s title returns to a statement by Sigmund Freud, who said that female sexuality was like a dark continent that represented an uncharted continent for psychoanalysis. The new work Les interdictions en 2014 consists of 68 drawings (a reference to the revolutionary events of May 1968 in Paris) that represent various forms of prohibition from around the world. These range from everyday restrictions such as bans on taking photographs or smoking, all the way to censorious laws based on cultural-political values such as the ban on women driving in Saudi Arabia. Here as well, Annette Messager addresses serious themes, the forces that concern and define people in everyday life, in a poetic and humorous manner.