Life. In the context of the Kunisaki Peninsula, the Art Festival is held with the objective of utilizing the creative potential of art to bring the area's unique natural, historical and cultural resources together with contemporary artistic expression. 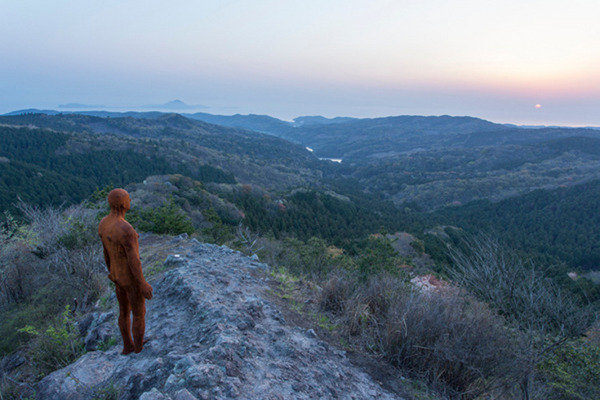 A unique culture has for generations developed on the Kunisaki Peninsula due to a blending of local and introduced elements. Now, through this new encounter between artistic visions and this land’s power, history and culture, we will witness the birth of unique artworks that could not have been made anywhere else. The festival will be centered around the three pillars of site specific works—which will be located during the festival in small villages along the coast and in the mountains—performance projects and residence projects, but it will also include trekking-hybrid tours, talks and much more. The festival will aim to be a new kind of "art festival to navigate by foot," thereby allowing visitors to experience through art the unique power and flow of time of the peninsula.

About Kunisaki Peninsula
Kunisaki Peninsula, located in the northeast of Oita Prefecture, is surrounded by the Bay of Beppu and the Iyo and Suo seas and has at its center the series of volcanic peaks around Mt. Futago. Valleys fan outwards to the sea, opening out to the six villages of Tashibu, Kunawa, Imi, Kunisaki, Aki and Musashi. This is the place where Ninmon, the servant of Hachimanjin of Usa Jingu, did his training and it is the birthplace of the culture known as Rokugomanzan.* For this reason, Kunisaki Peninsula is known as the birthplace of Japan's unique hybrid Shinto-Buddhist religion. This idea of two different religions integrating and co-existing is in itself rare in the world, and this unusual culture and its traditions continue to be upheld today.

*Rokugomanzan: Refers to the temples in the six countries of the Kunisaki Peninsula, most of which are thought to have been established by Ninmon. The syncretic religion combining Shinto and Buddhism that developed on Kunisaki is referred to as Rokugomanzan culture.

Purpose of the event
In the context of the Kunisaki Peninsula's decreasing and aging population, the Kunisaki Art Festival is held with the objective of utilizing the creative potential of art to bring the area's unique natural, historical and cultural resources together with contemporary artistic expression and thereby further efforts to heighten the area's attractiveness and at the same time publicize it domestically and internationally so as to grow the visitor population and create a lively local society.