International contemporary art biennial. The project features the work of 58 artists in 18 venues located throughout New Orleans. It aims to explore a philosophical inquiry on humanity, an effort to interrogate human feelings and human relationships. 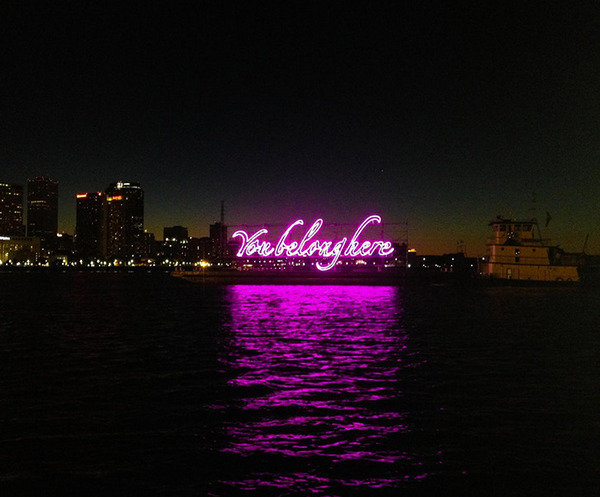 Prospect New Orleans is an international arts biennial event that will take place from October 25, 2014 through January 25, 2015. 'Prospect.3: Notes for Now' will present the work of more than 50 artists selected by Artistic Director Franklin Sirmans, in more than 18 locations, including museums, community centers and independent sites throughout neighborhoods across New Orleans.

About Prospect New Orleans
Prospect New Orleans is an international arts biennial event that will take place from October 25, 2014 through January 25, 2015. 'Prospect.3: Notes for Now' will present the work of more than 50 artists selected by Artistic Director Franklin Sirmans, in more than 15 locations, including museums, community centers and independent sites throughout neighborhoods across New Orleans. Prospect.3 is made possible by our generous supporters that include: National Endowment for the Arts, the Lambent Foundation Fund of Tides Foundation, The Andy Warhol Foundation for the Visual Arts, Inc., The Joan Mitchell Foundation, Whitney Bank, the Collins C. Diboll Private Foundation, Jones Walker, RosaMary Foundation, a Community Arts Grant made possible by the City of New Orleans as administered by the Arts Council of New Orleans, and many others.

“What is the nature of the search, you ask? Really it is very simple, at least for a fellow like me; so simple that it is easily overlooked. The search is what anyone would undertake if he were not sunk in the everydayness of his own life. To become aware of the search is to be onto something. Not to be onto something is to be in despair.” – Binx Bolling, The Moviegoer

In Walker Percy’s 1961 novel The Moviegoer, the protagonist Binx Bolling is consumed by “the search” in the week leading up to his thirtieth birthday. Pointedly, the birthday falls on Ash Wednesday—the day after the most important holiday in New Orleans, Mardi Gras. Though Binx’s attendance at the carnival is peripheral, there’s much to be learned from his vantage point at the margins of the crowd. Bolling, a solitary moviegoer, lives his life on the margin, slowly creeping closer to the center as he embraces “the search.” He begins the book in the isolated suburbs of New Orleans, comfortably away, and apart from other people’s lives, but finds solace in the contested city by its end. The novel, set in a time of heightened social awareness in the first half of the decade’s movement for civil rights in America, delves into the depths of existentialism in a world where people were legally segregated from each other, making it impossible to celebrate the individual. “The peculiar institution” of slavery and immigration during the 18th century created a city that, even in 1961, was a complex social arrangement, one that remains palpable today. The third Prospect biennial (P.3) is invested in and will explore ‘the search’ to find the self and the necessity of the other as part of that quest.

It is New Orleans’ distinct history that makes it an illuminating source of philosophical inquiry for the present. Percy, a student of Soren Kierkegaard and acolyte of Jean-Paul Sartre, was attempting to “explore the dislocation of man in the modern age,” and certainly the physical and psychological violence we do to each other is one of the continuing facets of our species’ ‘dislocation.’ The “search” in Prospect.3 (P.3) also aims to further explore a philosophical inquiry on humanity, an effort to interrogate human feelings and human relationships. Recognizing the position of P.3 as a biennial-type exhibition for the United States—passionately committed to being international in scope and weary of geographic location as something that is increasingly interchangeable in today’s world of contemporary art—Prospect.3 is, in the mode of past Prospect projects, vitally committed to the city of New Orleans. Placed at the foot of the Mississippi River on the Gulf of Mexico, New Orleans’ influx of people has been remarkable in its diversity, and unlike any other American city. As a node for thinking through global issues, New Orleans offers an example that is revelatory, generative and frictional.

Guided by several curatorial themes, P.3’s exhibitions, site-specific installations and new works will address: The New Orleans Experience, Seeing Oneself in the Other, The South, Crime and Punishment, Movie going, The Carnivalesque, Abstraction, Visual Sound, and will seamlessly tie together the largesse of the show through commissions by several artists under the moniker, All Together Now.