The exhibition offers an insight into the recently rediscovered complete works of Schad-Rossa, contrasting them with works of Styrian artists in painting, sculpture, graphics, photography and poster art from the period around 1900 to the 1920s. 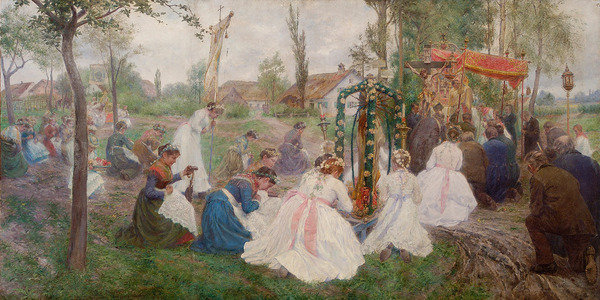 In the autumn of 1900 the painter, sculptor and artisan Paul Schad-Rossa (1862–1916) moved from Munich to Graz. Attracted by a lively arts scene, he started numerous initiatives that set out to unite art and life, in the spirit of Secessionism. He founded a society of artists and an art school, organised exhibitions and published the magazine Grazer Kunst. His activities divided the press as well as the public into euphoric advocates and bitter opponents.

At the time art was looking throughout Europe for answers to the questions thrown up by the radical changes in living conditions due to industrialisation and modernisation. Everywhere there was a struggle being waged for modern art: Naturalism and Impressionism stood opposed to Symbolism and Stilkunst, yet the academic painting of Historicism still found its public, too. The arts scene in Graz was also in a period of upheaval. A group of committed personalities attempted to link the provincial artistic life here with events in the great capitals. As a result innovations and restructurings occurred in all the city's art institutions: in the university, in the training of artists, and in the various art and photography clubs.

Schad-Rossa's stay in Graz from 1900 to 1904 marks the apogee in this wave of innovation. As a Symbolist, he had tried to realise a form of art that took its bearings from "eternal" spiritual and mental truths, and that was meant to lift life from the banality of everyday existence up into higher spheres in the "total work of art." After initial successes, the public in the provincial city of Graz proved themselves to be too conservative and down-to-earth, however, to follow the lead set by his experiments and "wonderful enthusiasm." Therefore he moved to Berlin, where he died during the First World War and subsequently fell into oblivion.

The exhibition offers an insight into the recently rediscovered complete works of Schad-Rossa, contrasting them with works of Styrian artists in painting, sculpture, graphics, photography and poster art from the period around 1900 to the 1920s—including many likewise recently discovered works. It shows how long Symbolism and Art Deco remained alive here in the Austrian provinces, and poses the question as to what extent the innovations of that period really signalled a move towards modernity.

In cooperation with the Städtisches Museum Engen + Galerie, Velten Wagner.