Fake and reality. The flora and fauna of their world... 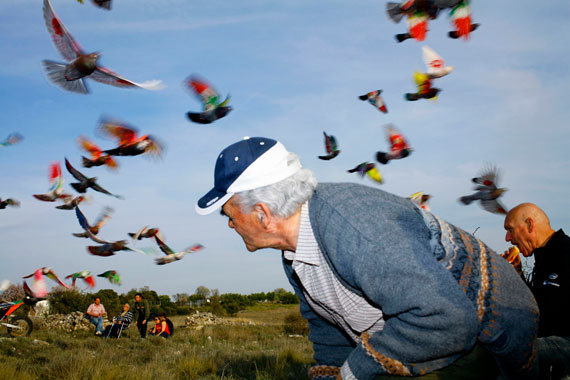 Working at his Institute of Critical Zoologists, the Singapore-based artist Robert Zhao Renhui creates his own universe and a guide to the flora and fauna of this world. It is usually impossible to tell what is reality and what is fake. Then again, our confusion hints at the fact that the typical consumer is just as clueless in everyday life. Is the apple in the supermarket genuine or genetically manipulated? In which ways does man influence nature to make it what we perceive as pleasant and aesthetic? It is often only a fine line that separates reality from its falsification. Looking at Ricardo Cases's pictures, for example, we would assume that they are counterfeit: painted pigeons that look like they were created on a computer using Photoshop. The more baffled we are to learn that they are real: a group of pigeon breeders from the area around Valencia, Spain, painted their birds in gaudy colors for a competition. (Image: Ricardo Cases Marin, "Man surrounded by pigeons" Pigment print, 50 x 75 cm, Ed. 5) Opening November 6, 2014 at 7 pm. Artist talk at 6 pm.