The life and death of works of art. The exhibition sketches the outlines of several possible models for evoking in a tangible way what the dismantled works have become in our eyes: sample, definitive relic, cult object, souvenir, archaeological object, fake or transubstantiation. 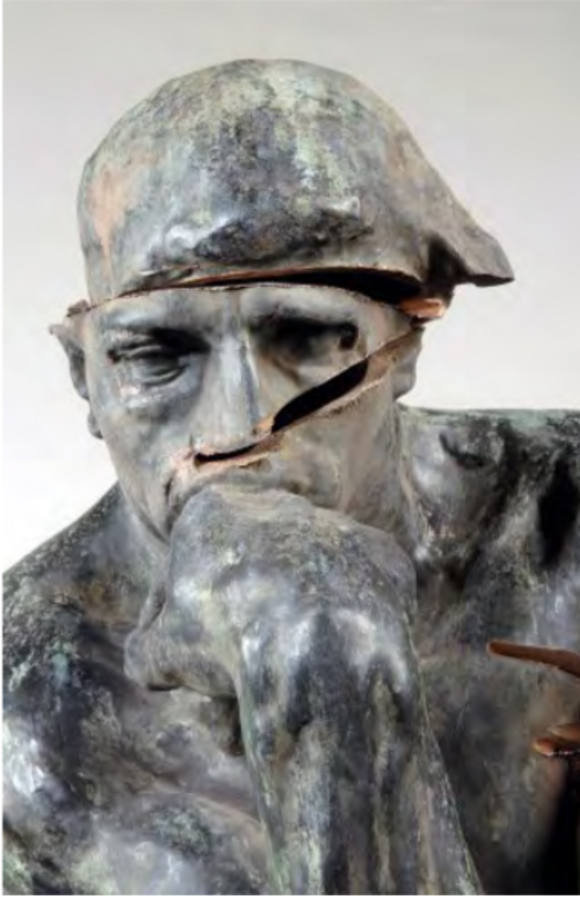 At the time of the release of the publication entitled « Machine » (2012) which was co-published by Cneai and Mac/val, the restorer Benoit Dragon presented a collection of relics of modern and contemporary art works: flags by Buren, extracted nails on Fernand Léger canvases, wires from Calder mobiles, frames signed by De Staël, etc. These objects, which used to be but are now no longer works of art, gathered over the course of years and many restorations by Benoit Dragon, are the starting point for « La vie et la mort des oeuvres d'art » (the life and death of works of art).

From 2006, with the project « Aakey », François Piron put together a reliquary in a tiny cell at the Centre de Création Contemporaine de Tours using a selection of fragmentary artworks confided by several artist friends (the part for the whole). Seven years later, the display « Keeping is not collection » set up by Jason Hwang at the Los Angeles public library, re-turned into fetishes artefacts still embodied by the time of production of the work from which they have been separated, lost. Transformed by the display case, they were made positive again.
These two examples, similar to Benoit Dagron's collection, bear witness to a shared contemporary preoccupation for the fate of objects which were but are no longer works of art: with artists such as Alexis Guillier (« Reworks », from 2009), Gregory Buchert (« Le musée domestiqué », from 2012), or even with projects such as « Gallery of Lost art » (Tate Modern, 2012-2013), « Reversibility: A theatre of de-creation » (Pierre Bal-Blanc, 2008-2012) and the Salvage art institute (from 2009, Elka Krajewska's project takes stock and re-popularises the case of damaged works considered by insurers as no-longer-art). As part of the exhibition « Le syndrôme de Bonnard » at the Villa du Parc (Annemasse, 2014), the curatorial collective Le Bureau/, with the museum's agreement, invited artists to reprise their works contained in the Mamco's collection. The artists operated in place of restorers. The same restorer who at times, as Paul-Hervé Parsy demonstrated with « Fountain », operates in place of the artist: if restoration is always an act of production, the specific example of « Fountain » at the Pompidou Centre, after 1993 and 2006's degradations, is exciting in the sense that it produced an original (thereafter different from the other instances edited by Arturo Schwarz in 1964, the restored readymade became a unique work) and a fake (one generally says hyper-restoration; since a restored readymade, having become original, fundamentally contradicts Marcel Duchamp's act). Thus, despite the cosmetic continuity conservation work carried out on the object, in reality it was in the one same act that the day it was restored Marcel Duchamp's work ceased to exist.

«The life and death of works of art » sketches the outlines of several possible models for evoking in a tangible way what these dismantled works have become in our eyes: sample, definitive relic, non-definitive relic, cult object, souvenir, archaeological object, fake or transubstantiation.

At Chatou, a collection of artefacts are presented on the floating lines of fine structures made from bent iron tubes by the designers Camille Platevoet and Arnaud Daffos: the publication « Machine » (Benoit Dagron, Christophe Lemaitre and Aurélien Mole, 2012); the extracted nails from a Fernand Léger painting (Benoit Dagron collection); a model, a photograph and audio recording of a text read by Gregory Buchert (« Le musée domestiqué », concerning an artwork deconstructed by Pierre Mercier); a touched up exhibition catalogue by Jean-Luc Blanc (suggested by le Bureau/); a damaged work by Alberto Giacometti considered by its owner, the insurer AXA Art in a state of « total loss » (suggested by the Salvage art institute); a new video by Alexis Guillier in the context of his project « Reworks », which will evolve throughout the course of the exhibition.
Christophe Lemaitre, October 2014.

With support from the DRAC Île-de-France, AXA Art France and the fondation Giacometti (Paris).