'Guaynabichean Odyssey'. The exhibition presents a new series of eccentric paintings that delve into the medium's historical role of commemorating social status, and generating myths for the wealthy and powerful. The artist has developed a project inspired by Spanish conquistador, Juan Ponce de Leon. 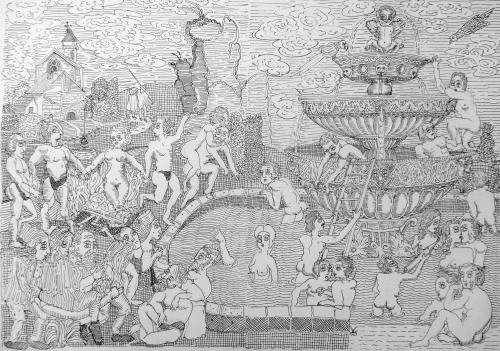 David Castillo Gallery is proud to present José Lerma's Guaynabichean Odyssey, a new series of eccentric paintings that delve into the medium's historical role of commemorating social status, and generating myths for the wealthy and powerful. Born in Spain and raised in Puerto Rico, the artist has developed a project inspired by Spanish conquistador, Juan Ponce de León, and his search for the mythical Fountain of Youth in modern day Florida. With a dash of inspiration from his personal history, Lerma's work often reflects on pictorial traditions such as portraiture by prodding at colonial tropes evidenced, for example, in monetary iconography. Both an exploration of the conceptual and material issues of painting, he deftly employs a variety of non-traditional materials and hybrid techniques in the works he has created for this exhibition.

Guaynabichean Odyssey, the exhibition title, refers to Guaynabo, Puerto Rico both the town where José Lerma grew up and the site of Ponce de León's first European settlement on the island (Caparra). The artist's historical research for this show began with an investigation of German printmaker Sebald Beham's sixteenth century woodcut, Fountain of Youth-Bathhouse (ca.1531). The woodcut depicts the transformation of elderly figures to youthful ones that are engaged in an array of sexually suggestive and hedonistic acts, while a group of spectators on a roof drink, converse, and enjoy music. It is one of the most notable early depictions of the Fountain of Youth, which some historians have argued contributed to the myth that Ponce de León was in search of the mystic waters instead of gold and brutal conquest to improve his status in the expanding Spanish Empire. The Fountain of Youth was a distinctly European obsession; to obtain its undiscovered powers of rejuvenation and immortality were but thinly veiled metaphors for conquest and colonization.

Inspired by these traversing histories and the aesthetics of satirical cartoons, the exhibition features Lerma's recent experiments in applying relief techniques to children's brightly colored polymer clay to create paintings with lush textures and tactile surfaces. These portrait paintings, recalling honorary medals or coins, will punctuate the show depicting individuals who have contributed to the myth of Ponce de León over the centuries. A massive curtain painting that re-imagines Beham's Fountain of Youth-Bathhouse will be one of the anchoring pieces in Guaynabichean Odyssey. Other works in the exhibition include the artist's "glass-less" mirrored surface paintings, a rejoinder to Michelangelo Pistoletto's paintings on mirrors that he produced in the early sixties. Simultaneously whimsical and sinister, Lerma's project re-imagines the layers of mythmaking in Ponce de León's tale and positions them as metaphors for deflating heroic painting.