An exhibition about the Real Demilitarized Zone Project, with artists that explore inner-Korean border areas in Cheorwon-gun, Gangwon-do, South Korea. 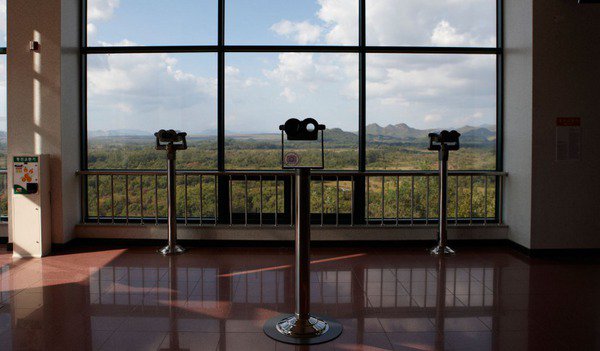 Slought is pleased to announce "Cold War, Hot Peace," an exhibition about the REAL DMZ PROJECT, on display from February 26, 2015 through April 12, 2015. The exhibition features works by artists -- including Dongsei Kim, Mark Lewis, Yang Ah Ham, Florian Hecker, Ingo Niermann, Tomás Saraceno, Koo Jeong A, and John Skoog -- that explore inner-Korean border areas in Cheorwon-gun, Gangwon-do, South Korea. It is organized by Sunjung Kim and Nikolaus Hirsch with the REAL DMZ PROJECT Committee in Gangwon-do, South Korea, working together with Samuso, Space for contemporary art Co., Ltd., and Art Sonje Center.
An opening will take place at Slought on February 26, 2015 from 6:30-8:30pm, sponsored by Penn Cinema Studies, and will begin with a public conversation with curators Nikolaus Hirsch and Sunjung Kim, theorist Thomas Keenan of the Human Rights Project at Bard College, and participating artists.

Korea, with its antagonistic division north and south of the Military Demarcation Line around the 38th parallel, remains frozen in time, yet in permanent threat of the overheated political paranoia along the world's most heavily armed border. The sixty-year-long ceasefire has created its own spatial paradoxes and cultural ironies, a time caught somewhere between cold war and hot peace. After the Korean War came to a halt with the ceasefire agreement on July 27, 1953, the DMZ was immediately installed: four kilometers wide and 248 kilometers across, giving the entire peninsula an ideologically insecure security belt of sorts. South of it, the Civilian Control Line was set up some five to fifteen kilometers from the Southern Limit Line, and the area in-between came to be called the Civilian Control Zone. Since then, the hot war has turned into what could be seen as the last relic of the now-very-real Cold War. Indeed, the impact of ideology remains omnipresent: an oppressive presence of military infrastructures such as checkpoints, fences, and guard posts; and the sites of the so-called "Security Tour" such as the DMZ Peace & Cultural Plaza and the Cheorwon Peace Observatory that reflects Sunshine politics. The other, often neglected reality is the DMZ's wild natural landscape with its rare species and agricultural territory cultivated by farmers in the Civilian Control Zone, an area in which civilian access is strictly regulated.

The REAL DMZ PROJECT is a contemporary art project based on research conducted on the Demilitarized Zone (DMZ). Having begun with a critical perspective on the ironies that surround the Demilitarized Zone, the project has expanded this year by experimenting not only with artworks in situ but also via dialogue and discussions within the field of the humanities and social sciences. Hence the project investigates the paradoxical conditions of conflict while imagining a new, alternative reality for the Demilitarized Zone. The REAL DMZ PROJECT strives to give voice to the historical, political, and social strife that has resulted from the political division. The project approaches the issue from the perspective of the participating artists, shedding light on the ruptured and distorted narratives, the forgotten or erased stories.