The sculptural works in the artist's repertoire recently begun a transformation from 'macro to micro', with a new focus on crystalline, molecular structures. 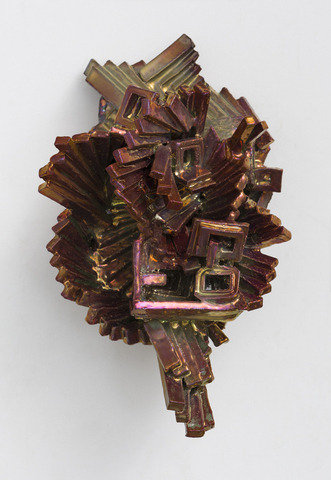 The sculptural works in Kunin’s repertoire and her embrace of things scientific, natural and geological have recently begun a transformation from ‘macro’ to ‘micro’, with a new focus on crystalline, molecular structures. The otherworldly semi-figurative aggregates, still baroque in feeling, now consist of rhombohedral elements, ancient stair-stepped geometric forms that seem to reproduce from the inside out. Some present as female; others, alien-like or non-gender specific. Whether wall mounted or free standing, Kunin’s intricate sculptures become even more animated with the play of light on their iridescent surfaces.

Les Guérillères is a nod to Monique Wittig’s 1969 feminist utopian novel of the same name. Kunin cites this work in recognition of its radical portrayal of gender, as well as its references to science fiction and mythology. Sexuality, always an underlying feature in the work, has become more palpable, with figures now emphasizing sharp angles or voluptuous curves. Kunin has long been influenced by the decorative arts. Art Nouveau, Art Deco, Op Art and Futurism act as visual cues, pointing to the opulent, the grotesque, and most recently the voyeuristic narrative in the work.

Julia Kunin lives and works in Brooklyn, NY. She received her B.A. from Wellesley College and an M.F.A. from Rutgers University. She has exhibited extensively in Europe as well as the United States. Kunin has been included in exhibitions at The Museum of Art and Design, NY, The Museum of Applied Art and Design, Frankfurt, Germany, the Sculpture Center, NY, the Brattleboro Museum, VT and in 2002 a solo exhibition of her work was mounted at the Deutches Leder Museum in Offenbach, Germany. Kunin was the recipient of the Fulbright Scholarship in 2013, the 2010 Trust for Mutual Understanding Grant, the 2008 Pollock-Krasner Foundation Grant, and The John Michael Kohler Arts/Industry Artist Residency in 2007. Fellowships have included the Marie Walsh Sharpe Art Foundation, Yaddo, The Millay Colony, The Vermont Studio Center, The MacDowell Colony and Skowhegan.