Kaleidoscope.This exhibition brings together artists from different backgrounds that engage with the languages of abstraction and architecture through different media to achieve distinctly varied results. 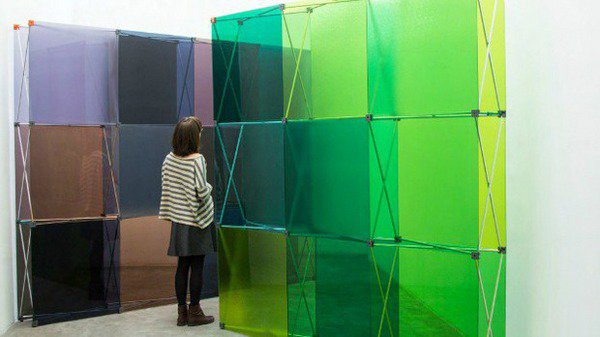 Christopher Grimes Gallery is pleased announce its forthcoming exhibition Kaleidoscope: abstraction in architecture. This exhibition brings together artists from different backgrounds that engage with the languages of abstraction and architecture through different media to achieve distinctly varied results. Included in the exhibition are works by Kevin Appel, Carlos Bunga, Gianfranco Foschino, Veronika Kellndorfer and Lucia Koch.

From its beginnings in the early 20th century the legacy of abstraction is rooted in social and political utopias. Today, abstraction as an artistic strategy has reinvented itself for the 21st century, and the fragmentation of form is a common denominator within the majority of the works featured in this exhibition. Kevin Appel’s (United States) paintings explore the relationship between physical space, architecture and the painted image. Using photographs as a ground on which to build his painting, he applies layers of paint that act as screens, compressing the perceived space between the built environment and nature. The act of looking through one element to another, or the blocking of one impenetrable layer by another and mediating our perception of nature and our encounter with the exterior world has become a signature of his painting. Appel’s work is in the collections of the Los Angeles County Museum of Art, Museum of Contemporary Art, Los Angeles, and the Museum of Modern Art, New York, among others.

While Appel’s approach to abstraction is to collide several planes of visual information, Veronika Kellndorfer (Germany) reveals the subjectivity of space and the ephemeral nature of seeing. Her photographs of the glass facades of modernist architectural landmarks are silkscreened onto large glass panels. The works conflate internal and external environments and invite the viewer to uniquely experience their own surroundings. Kellndorfer has recently completed a site-specific commission for the Architekturmuseum, Pinakothek der Moderne in Munich, where she is presenting large-scale works for the Lina Bo Bardi 100 survey show open through February 22nd. Her work is included in the Museum of Contemporary Art San Diego, CA, Hammer Museum Los Angeles, CA, and Pier 24 in San Francisco, CA, in addition to several European institutions.

Lucia Koch (Brazil) challenges the viewer's perception and experience of space using diverse tactics within architectural settings. In addition to a video and one of her large-scale photographs of the interior of a small coffee bag, Koch will present a wall structure made of aluminum and colored acrylic panels that filter natural light. Through planar interventions, the wall connects different spaces and environments. In 2016 Koch will be the subject of a solo exhibition at the Museum of Modern Art, Rio de Janeiro, Brazil.

Carlos Bunga (Portugal) creates process-oriented works that refer to and intervene in their architectural surroundings. While using ordinary, unassuming materials such as cardboard and tape, the resulting finished works involve an extreme degree of aesthetic care and delicacy. For this exhibition he will preset a series of constructed box works that function at the intersection of painting and architecture. He is currently shortlisted for the Artes Mundi 6 Prize (January), where he has produced a major work for the exhibition of the participants at the Wales's National Museum of Art in Cardiff.

Gianfranco Foschino’s (Chile) videos confront one's perceived distinctions between multiple genres including photography, painting and video. He sets up a fixed camera and captures the subtle movement that occurs in front of the lens. Filmed from a distance, the scene increases in intensity as the minutes pass by with no sign of the narrative one has come to expect from video. Foschino’s work was included in SITE Santa Fe's Biennial, Unsettled Landscapes, and he has recently won the Silver Lion 2014 award in the 14th International Architecture Exhibition at the Venice Biennale.