Junk Dada. The exhibition explores a pivotal yet under-recognized figure in the development of postwar American Art whose effect is only beginning to be fully understood. 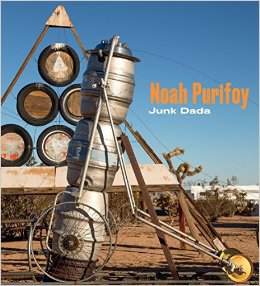 Noah Purifoy (1917-2004) lived and worked most of his life in Los Angeles and Joshua Tree, California. A founding director of the Watts Towers Art Center, his earliest body of sculpture, constructed out of charred debris from the 1965 Watts Rebellion, was the basis for 66 Signs of Neon, a landmark group exhibition about the riots that traveled to nine venues between 1966 and 1969. In line with the postwar period’s general fascination with the street and its objects, Purifoy’s 66 Signs of Neon constituted a Duchampian approach to the fire-molded alleys of Watts, a strategy that profoundly impacted artists such as David Hammons, John Outterbridge and Senga Nengudi.

In the late 1980’s, after eleven years of public policy work for the California Arts Council, where Purifoy initiated programs such as Artists in Social Institutions, bringing art into the state prison system, Purifoy moved his practice to the Mojave desert. He lived there for the last fifteen years of his life, creating ten acres of large-scale sculpture constructed entirely from junked materials.

The exhibition explores a pivotal yet under-recognized figure in the development of postwar American Art whose effect is only beginning to be fully understood.
This exhibition was organized by the Los Angeles County Museum of Art and made possible by The Andy Warhol Foundation for the Visual Arts and the National Endowment for the Arts and LACMA's Director's Circle. Additional support is provided by Peter Morton, in memory of Gil Friesen, the Dedalus Foundation, and the Wallis Annenberg Director's Endowment Fund.

All exhibitions at LACMA are underwritten by the LACMA Exhibitions Fund. Major annual support is provided by Kitzia and Richard Goodman, with generous annual funding from Janet Chann and Michael Irwin in memory of George Chann, Emily and Teddy Greenspan, Jenna and Jason Grosfeld, and Lenore and Richard Wayne.