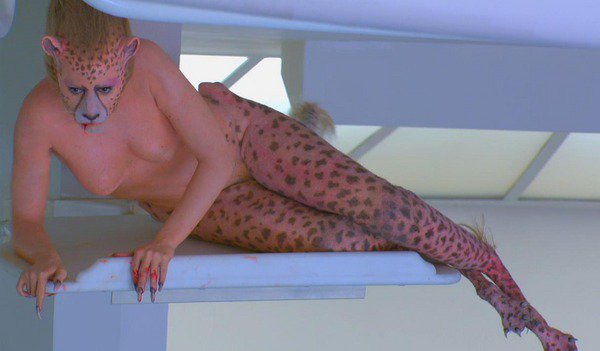 Bringing together over 100 works in diverse mediums by 48 international artists from the Guggenheim’s contemporary collection, Storylines: Contemporary Art at the Guggenheim examines the ways in which artists are forging new paradigms for storytelling that expand on conventional narrative devices such as plot, character, and setting. Anchored by a number of artworks from the 1990s, the majority of works in the exhibition were created after 2005 and selected from the Guggenheim’s growing collection of global contemporary art. The show is enhanced by the contributions of renowned novelists and poets, who were invited to reflect on individual artworks as points of departure for their own creative work. Accompanied by gallery readings, screenings, and performances, which include an all-night dance party, Storylines is on view in the rotunda from June 5 to September 9, 2015. Nearly half of the works will be on view at the Guggenheim for the first time.

This exhibition is supported in part by Culture.pl and the Juliet Lea Hillman Simonds Foundation.

The Leadership Committee for Storylines: Contemporary Art at the Guggenheim is gratefully acknowledged for its support, with special thanks to Rachel and Jean-Pierre Lehmann and Chair Roberta Amon as well as to Stefan Edlis and Gael Neeson, Katherine Farley and Jerry I. Speyer, Gladstone Gallery, Greene Naftali Gallery, Michael S. Lee, Nancy and Woody Ostrow, Sarah Arison, Denise LeFrak Calicchio and John Calicchio, Linda and Gregory Fischbach, and Courtney and Scott Taylor.

Additional funding for this exhibition is provided by the New York State Council on the Arts and The Polish Cultural Institute New York.

About Storylines
Visual art has always been closely associated with storytelling. In the twentieth century, with the advent of abstraction and its radical break with the past, many artists associated with the avant-garde in the United States and Europe rejected the figurative and eliminated explicit narrative content. In the 1990s, a new generation of artists turned away from the deconstruction of representation in favor of more intimate, open-ended acts of storytelling, weaving in their own accounts of race, gender, and sexuality. Such stories were often embedded in otherwise abstract forms, sometimes activated by platforms for social interaction. Storylines will include key works from this influential era, such as Felix Gonzalez-Torres’s “Untitled” (Golden) (1995). Appearing on four of the museum’s six ramps, the luminous curtain shimmers with strings of faux-gilded beads, inviting the viewer to transform its shape simply by walking through it. A poignant example of works addressing concerns of communal and queer identity, Catherine Opie’s self-portraits, taken in the 1990s and revisited in 2004, will also be on view, offering a deeply personal perspective on narrative representation. Signature works by Matthew Barney, Maurizio Cattelan, Mark Leckey, and Glenn Ligon—with their invented scenarios, literary references, and explorations of contemporary mythologies—will provide highlights from the museum’s exhibition and collection history. Taking the historical moment of these works as its starting point, Storylines offers an updated view of how the museum’s global collection practices have evolved over the past decade. Numerous works acquired through international collaborations, such as the Guggenheim UBS MAP Global Art Initiative, demonstrate the ways artists have engaged narrative forms to communicate ideas about identity, history, and politics. A number of the works in Storylines were produced as a part of commissioning programs, continuing to build upon the museum’s rich history of catalyzing the creation and exhibition of new work.

For many artists working today, storytelling does not require structured scenes and characters. Rather, narrative potential—whether individual memories or the broader cultural stories we tell—might be rooted in a found object or image, a text, a specific material, or a conversation, offering multiple interpretive possibilities rather than a single reading. In projects created through extensive research, acts of appropriation, or performance, the artists in Storylines uncover layers of meaning, turning to individual and often autobiographical experience as a means of conveying shared stories, whether real or fictional. For example, Mariana Castillo Deball takes on the role of explorer or archeologist, compiling found materials in a way that reveals new connections and meanings in her two works, Lost Magic Kingdoms Paolozzi (2013) and Stelae Storage (2013). Situated on storage racks, plaster casts of objects found in southern Mexico raise questions about the value of copy and the transmission of historical truth. Two pieces from Taryn Simon’s series A Living Man Declared Dead and Other Chapters I-XVIII (2008–11) result from meticulous research to trace genealogical connections—and the effect of fraught familial relations—across eighteen diverse bloodlines, which she expresses in photography, text, and graphic design. Mark Manders creates uneasy sculptural tableaux that evoke forgotten stories or buried memories; each work embodies a chapter in an ongoing, career-long narrative that conflates self and architecture. The installation Room with Reduced Chair and Camouflaged Factory (2003) comprises a haunting, factory-like structure, under which is placed a neatly folded pile of the artist’s clothes, a pair of shoes, and a set of contact lenses, disrupting this fantasy realm with a disarming dose of autobiography.

As contemporary artists introduce new narrative forms in their works, they invite consideration of the cycles of communication and interpretation that have emerged through social media and the rapidly evolving ways that knowledge, information, and fictions are created and consumed. Ranging from Agnieszka Kurant’s crowd-sourced, communal autograph projected on the facade of the museum to Simon Fujiwara’s humorous, circuitous video that reenacts a real-life experience through the “rehearsal” of a screenplay, the works underscore that seemingly every aspect of life is now subject to commentary and circulation—largely through digital text and photographs. These new narrative frames highlight the roles that each of us can play as both author and reader, foregrounding the fact that meaning is contingent in today’s interconnected and multivalent world.

Novelists and Poets Respond to Guggenheim Artworks
As a means of engaging the dynamic between word and image, a group of eminent novelists and poets have contributed reflections on selected works in the exhibition. Enlivening the complex relationship between literature and art—in particular the ancient tradition of ekphrasis, the verbal representation of the visual—the resulting polyphony will signal the interpretive potential that lies within each object and performance on display. These texts will be available in the Guggenheim app, at guggenheim.org/storylines, and in booklets located throughout the museum.

Film, Performance, and Public Programs
As part of the exhibition, film screenings and performances will feature work in the Guggenheim’s collection in addition to new performances and events by artists in Storylines and in the permanent collection.

FILM
Storylines Film Program
Fridays, June 5, 12, 19, 11– 4 pm
New Media Theater
This program features work by Guggenheim collection artists who use video as a means to tell their unique narratives. Mark Leckey’s film Fiorucci Made Me Hardcore (1999) strings together altered video footage from dance clubs with an amalgamation of sounds to reveal the poignant socio-economic aspirations of counterculture nightlife. John Bock’s Dandy (2006) is a surrealistic drama about a fictional 19th century inventor’s relationships with his servant and his own tortured genius. Written, directed, and edited by Ryan Trecartin, I-Be Area (2007) is a feature-length promenade through a hallucinogenic world where the artist plays an array of characters exploring their personalities– as they or others perceive them – to comment on the vagaries of contemporary culture. Camille Henrot’s film Grosse Fatigue (2013) ambitiously sets out to tell the story of the creation of the universe, using images of diverse natural and anthropological objects culled from the collection of the Smithsonian Institution. Free with admission.

Matthew Barney: The CREMASTER Cycle
Saturdays, June 6, July 11, August 8, September 5, 10:30 am–7:30 pm
Peter B. Lewis Theater
Matthew Barney’s epic CREMASTER Cycle (1994–2002) is a series of feature-length films offering a contemporary creation myth. On select Saturdays throughout the summer, the Guggenheim will present day-long screenings of all five films, which are in the Guggenheim’s collection, presented in order of the films’ production. Free with museum admission. More information will be available at guggenheim.org/calendar.

PERFORMANCE
Gerard & Kelly: Timelining
Mondays, June 8–September 7, 5:45–10 pm
The duo Gerard & Kelly explores issues of identity and queerness through a performance-based practice that incorporates dance, video, sculpture, installation, and writing. Recently acquired by the Guggenheim, Timelining (2014) features a series of paired performers involved in close relationships—romantic, familial, or otherwise. Moving through space in a circular pattern, each couple takes turns reciting fragments of their personal histories from the present moment backward. On the evenings of these performances, admission after 6 pm is pay-what-you-wish (limited areas of the museum will be open).

An Evening with Kevin Beasley
Friday, June 26, 8 pm
Kevin Beasley’s commission by the Guggenheim’s Young Collectors Council on the occasion of Storylines, Strange Fruit (Pair 1) (2015) incorporates the sounds of the museum into sculptures made from sneakers, foam, resin, and other materials. For this performance, he uses the sounds recorded by these objects to build environmental and experimental compositions. $15, $10 members, $5 students.

Ellie Ga, Eureka, a lighthouse play and The Fortunetellers
Tuesday, June 30, 6:30 pm
Peter B. Lewis Theater
Steeped in research, Ellie Ga’s performances and video installations occupy a space between history, science, myth, and memory. For this event, Ga presents two narrative-based performances taking the form of lectures accompanied by projections of photographs, video, and annotated sketches. Eureka, a lighthouse play (2012–14) follows the artist’s exploration of the Lighthouse of Alexandria while The Fortunetellers (2007–11) ruminates on the rituals of life aboard a scientific research vessel in the Arctic. $15, $10 members, $5 students, includes an exhibition viewing and reception. Tickets and more information will be available at guggenheim.org/calendar.