From Paranoia to the Digital Sublime. Many of today's artistic practices confront the myriad interfaces and decentralized networks that continue to shape and transform daily life, forming new evolving connections between bits and atoms. 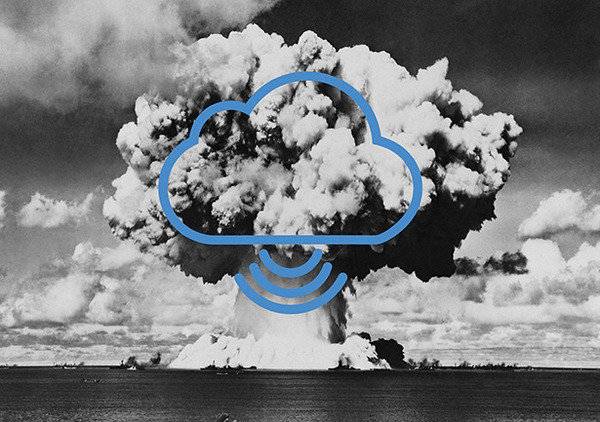 Since the second half of the 20th century, we have lived under the shadow of two clouds: the mushroom cloud of the atomic bomb, and now the "cloud" of information networks. How did the metaphor of post-war paranoia become the utopian metaphor for today's interconnected world? Under the Clouds confronts the interrelated effects and affects of these two clouds on life and work, leisure and love, and on images, bodies, and minds. If the mushroom cloud represented the potential annihilation of human civilization, the "cloud" is the diaphanous representation of the network-driven, information-saturated conditions in which we increasingly live. We are assailed with the effects and affects of the cloud; data overwhelms us with needs, demands, and sensations. Information floating in the cloud—where data is now increasingly stored and controlled—replaces the invisible threat of radiation, moving through apparently unseen yet pervasive ways. The singular image of the cloud, unseen yet floating above us, stands for everything from the abstractions of the financial system, to the increasingly mediated character of our social relationships, the role of algorithms, and the affects of liking and sharing. In these ineffable clouds lies the phantasmagorical nature of our contemporary sublime.

The information technologies of the nuclear era have now evolved to fit in the palm of our hand; we no longer merely look at images, we now touch, scroll, pinch, and drag them. Where is the border between the self and its data shadow, between information, memory, and knowledge? The biological, economic, and political effects of living under the clouds have taken the form of new relations between data and material; screens, images, and things; and the changing nature of sex and work. As earlier forms of technologically inflected art sought to mitigate the effects of rapid change—both on perception and society—many of today's artistic practices confront the myriad interfaces and decentralized networks that continue to shape and transform daily life, forming new evolving connections between bits and atoms.