Poetics and Politics of Data

The exhibition shows artistic works that approach the phenomena of Big Data and data mining, it introduces critically subversive approaches and interventions in networked spaces that make use of the potential of a virtual community and reflect personal performance in social networks. 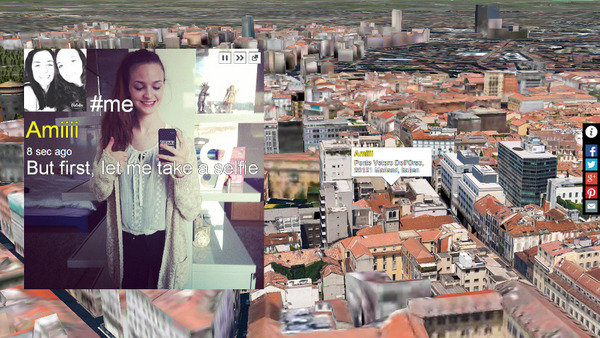 The exhibition "Poetics and Politics of Data" addresses the paradigm of a data-driven society and reflects life in an increasingly datified world. In visionary future scenarios, scientists enthuse over a world in which algorithms take over managing processes, envisioning a highly sensory and datafied space for us to live in, a world in which our desires and activities are anticipated, long before we carry them out. "Big Data“ is the keyword to this new era in which the power of data induces a radical transformation of a society whose actions and production of knowledge rely increasingly on the accumulation and evaluation of data.

“Poetics and Politics of Data” shows artistic works that approach the phenomena of Big Data and data mining, visualizing the continuous bitstream in various ways while referring to the political and social implications that come with a world that is controlled by data – from the processes of self-optimization to economical aspects and questions concerning the use and evaluation of this data. Who has access to our data? In what ways is it possible to extract useful information and find “valuable” and applicable correlations from the immense pool of data?

The exhibition introduces critically subversive approaches and interventions in networked spaces that make use of the potential of a virtual community and reflect personal performance in social networks. It focuses on aspects of surveillance strategies, data mining, privacy, post-privacy and digital autobiography acted out in social networks. Amid the constantly growing, infinite ocean of data, artists question the meaning and position of the individual in a technologically networked society and – thanks to their resistance and sense of independence – offer various alternatives to a normative world of data.

From computer-mediated installations to data visualizations, they address these questions through different media in order to not only generate a new approach to complex data structure, but to create a poetic immersive space of data.

“Poetics and Politics of Data” is an interdisciplinary project between HeK (House of Electronic Arts Basel), the Institute of Experimental Design and Media Cultures of the University of Applied Sciences and Arts Northwestern Switzerland FHNW, the Centre for Technology Assessment TA-SWISS and Opendata.ch, the Swiss chapter of the Open Knowledge Foundation, presenting an exhibition about artistic approaches to big amounts of data. Artistic strategies and concepts of data usage, -interpretation and -criticism will be on display, discussing the potential and dangers of Big Data and data mining.

Scenography:
As part of the scenography of the exhibition, the design research group “Inhabiting & Interfacing the Cloud(s)” has been asked to create an infrastructure that will also present works by ECAL (Media & Interaction Design), HEAD – Genève (Media Design), EPFL Lausanne (ALICE) and fabric | ch.

The cooperation project 'Poetics and Politics of Data' is supported by the Swiss Arts Council Pro Helvetia as part of its “Digital Culture” initiative.

"Search the web for 'iPhone reverse product placement', and you will find a clip from the first 'Sex and the City' movie (2008), in which the character Carrie gets handed an iPhone and shrieks; “I don't know how to work this'. Shot the year the first Apple smartphone was released, the clip overtly illustrates our current relationship to technology. Carrie was not in the know, did not understand popular technology. Left at the altar, not in control of her life, not able to master new technology. We as the viewer do want to understand how technology works, want control, not be left at the altar, and get an iPhone.

'Problem Exists Between Keyboard And Chair', abbreviated to PEBKAC, is an expression used in tech support culture since the mid nineties.
A derogatory term for a human error being the reason for the customer to seek assistance. Abbreviated to hide the pedantic position of tech support, creating an even larger social gap between them and the unwitting human sitting on the chair. By now, PEBKAC not only emphasizes that we are no longer bound to keyboards and chairs, but rather that society until now still struggles to define its relationship with networked technology.