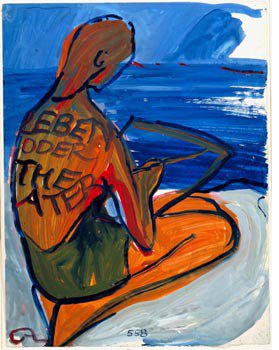 Life? or Theatre?, a cycle of gouaches by Charlotte Salomon (b. Berlin, 1917; d. Auschwitz, 1943), is a singular document of German-Jewish life in 1920s and 1930s Berlin. Comprising 1 325 works, it was created in France, where Salomon lived in exile, between 1940 and 1942; soon after its completion, the artist was deported and murdered at the age of twenty-six. A part of the cycle was on display at Documenta (13) in 2012; an opera adaptation of the work by Marc-André Dalbavie commissioned by the Salzburg Festival was performed in 2014, and a ballet version with music by Michelle DiBucci was premièred by the Musiktheater im Revier Gelsenkirchen, in 2015. The Museum der Moderne Salzburg shows a representative selection of 278 paintings from the cycle. No less captivating than its extraordinary history are the luminous colors of the gouaches and the way they interweave imagery, text, and music. Salomon herself described her work as a “Singespiel”; references to well-known pieces of music are scattered throughout the cycle. To reflect this aspect, many of the compositions selected by Salomon will be heard in the exhibition, complementing individual gouaches. A room dedicated to the opera will show photographs and costumes of the première at the Salzburg Festival 2014.

The consummate achievement of a life cut short, Life? or Theatre? draws on the history of Salomon’s family and her own experiences as a Jewish girl in Berlin. It consists of three parts: a preface about her teenage years in Berlin, a central section that tells the story of her love for the singing teacher Alfred Wolfsohn, and an epilogue sketching her life in exile in the south of France between 1939 and 1942. The gouaches are painted in an unrestrained and brightly colorful style that attests to the influence of various contemporary artists. A few dashed lines capture the distinctive features of the characters. The earlier scenes are executed in fairly great detail, but over time Salomon’s style grows increasingly nervous, as though she knew that she had not much time left. The compositions suggest a storyboard for a film, with several scenes integrated into a single picture, views from elevated vantages, and sudden close-ups.

In June 1943, Charlotte Salomon married the Austrian émigré Alexander Nagler. Both were deported a few months later; Salomon, who was pregnant, was murdered upon her arrival in Auschwitz. After the war, the cycle came into the possession of her father and stepmother, who had survived in the Netherlands; they donated it to the Jewish Historical Museum, Amsterdam, where it remains today.