Kinetic Painting. a comprehensive retrospective of the work of the American artist. Surveying an oeuvre that spans six decades, the show traces a genealogy of new forms of art that emerge as painting set in motion. 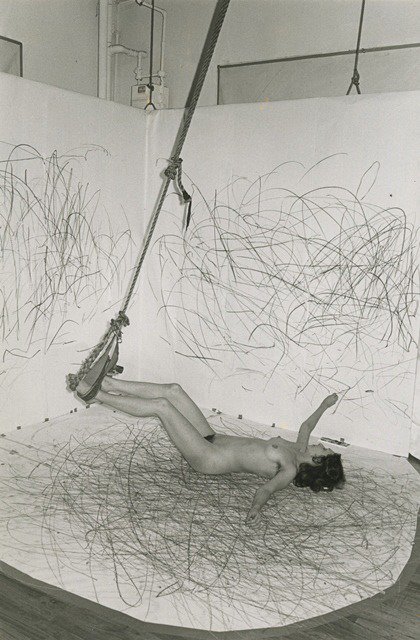 Reserving two floors of its Mönchsberg building for the work of Carolee Schneemann (b. Fox Chase, Pennsylvania, 1939, lives in New Paltz, New York), the Museum der Moderne Salzburg mounts a comprehensive retrospective of her oeuvre to pay tribute to a leading artist of her generation. Historians of twentieth-century art know Schneemann as a pioneer of performance art, and her seminal engagement with gender, sexuality, and the use of the body has been a major influence on generations of younger artists. The Museum der Moderne’s exhibition focuses on both canonic pieces and performances, and previously unpublished and rarely-seen works that showcase lesser-known aspects of Schneemann’s prolific output. “Based on a thorough scholarly review, the retrospective presents her oeuvre in unprecedented breadth and depth, embedding it in the context of painting and encouraging a wider audience to explore her art,” Sabine Breitwieser, director of the Museum der Moderne Salzburg and the exhibition’s curator, emphasizes. Starting with Schneemann’s early landscapes and portraits of the mid-1950s, which evolve into distinctive objects for which she coined the term Painting Constructions, the exhibition investigates the role of painting in connection with her performances, choreography, and experimental films. Covering 18,300 sq ft of exhibition space, the exhibition includes around 350 works, including loans from the Museum of Modern Art, New York, the Tate, London, and Schneemann's archives in the special collections of the Stanford University Libraries.

Carolee Schneemann studied painting at Bard College, Columbia University, and the University of Illinois. Early on, she started setting her paintings in motion using simple mechanisms and integrating photographs and everyday objects into her Painting Constructions. The exhibition features numerous examples of this genre, in which the artist also pioneered the use of fire as a creative material; some of them have never been on public display. In 1961, Schneemann moved to New York and threw herself into the downtown arts scene, contributing to avant-garde film and dance projects, happenings, and events. She was in the cast of Claes Oldenburg’s Store Days (1961), was the first visual artist to choreograph for the Judson Dance Theater (1962–1964) and appeared as Manet’s Olympia in Robert Morris’s Site (1964). Aiming to take painting beyond the canvas and to be “both image and image-maker,” she created a hybrid performance photography by melding her body into an environment that included Four Fur Cutting Boards (1962) to produce Eye Body: 36 Transformative Actions for Camera (1963).

Many of Schneemann's works and texts focus on the female body in its social and historical contexts and explore eroticism and sexual pleasure from a female perspective. Her sexually explicit film Fuses (1965) portrayed herself and her partner, the composer and music theorist James Tenney, in the midst of lovemaking that revealed a mutual intimacy and subverted the tropes of mainstream pornography. Interior Scroll (1975/1977), one of her most renowned works, posits the artist’s body as a wellspring of “interior” knowledge: inch by inch, she pulls a paper scroll from her vagina and reads a monologue from it decrying the sexism and disparagement that women confront in the worlds of art and experimental film. Perhaps her best known work is the pioneering “kinetic theater” piece Meat Joy (1964), an opulently ecstatic celebration of sexuality, pop music, and flesh. Turning back to cast a critical eye on the painting of the abstract expressionists, she developed Up to and Including Her Limits (1973–1977), a performance installation that highlights the artist’s body as a medium of artistic mark making. Recent works such as the sculpture installation Flange 6rpm (2011–2013) attests to Schneemann’s undiminished creative energy.