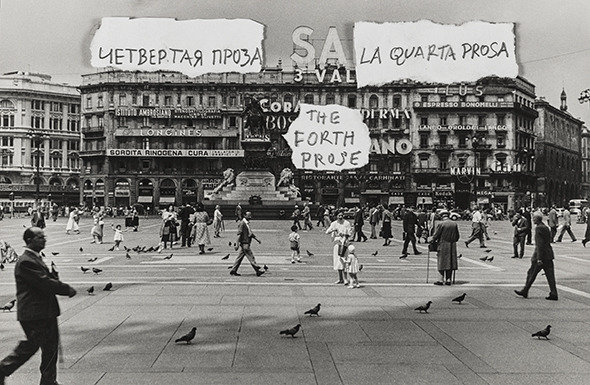 The Laura Bulian Gallery is pleased to announce the exhibition that will open its next season and inaugurate the new exhibition spaces at Via Piranesi, inside the ex-industrial complex Frigoriferi Milanesi. Though in keeping with the Gallery's commitment to exploring the art scene in Eastern Europe, the exhibition, curated by Marco Scotini, proposes a completely new theme: visual and conceptual poetry in this area from the '70s onwards. Entitled The Fourth Prose, the exhibition presents important graphic works and rare documents from four artists already known on the international scene: Vyacheslav Akhunov (b. 1948, Uzbekistan), Babi Badalov (b. 1959, Azerbaijan), Vlado Martek (b. 1951, Croatia) and Dmitrij Prigov (1940–2007, Russia).

"I divide all the works of world literature into those written with and without permission. The first are trash, the second, stolen air." This firm invective against any denial of freedom of expression is central to The Fourth Prose by the great Russian poet Osip Mandelstam. Written in 1930, it was the antithesis of the servility of Soviet writers and the mystification of cultural bureaucracy; while published in the Soviet Union only in 1988, it had previously circulated exclusively in manuscript copy and as a samizdat publication. In opposition both to betrayed forms of writing and subscription to "the pack of scoundrels who write," in Mandelstam we find a desire to escape from typography and to lay claim to the materiality of the word. "On the other hand, I have a lot of pencils and they are all stolen and of different colours. You can sharpen them with a Gillette blade."

Typewritten pages, drawings and collages of multiple materials, graphic alphabets, handwritten notebooks, duplicated flyers, series of postcards, photocopied slogans, newspaper pages, limited-run homemade pamphlets, tattoos and poem-objects are at the centre of The Fourth Prose. The exhibition illustrates a "pre-Gutenberg" landscape: despite being a constituent part of the Russian cultural tradition since Cubo-Futurism or El Lissitzky, in the '70s it embraced both the form of ideological dissent of the clandestine circulation of samizdat publications and attitudes in conceptual art throughout Eastern Europe. Within this necessary political protest against the authority of the printed text, there is a dimension we might call an "exodus from the book" which intensifies the performative and visual aspects of the text—not only in the forms in which it is produced, but also in the channels of circulation that evaded control. In short, all these self-published projects cannot be dissociated from a highly aesthetic outcome and freedom from any form of conditioning.

Being located on the border between the literary and visual worlds, the artists of The Fourth Prose all share a sense of libertarian militancy in their relationship with the power, which is expressed in a variety of solutions: ranging from compulsory psychiatric treatment (Prigov) to the denial of an exit visa (Akhunov) or the quest for political asylum (Badalov). While the Croatian artist Vlado Martek engages in a form of poetic activism interacting with a public of passersby on the street, Vyaceslav Akhunov chooses the format of the notebook as the medium for a daily, solitary and silent rebellion. On the one hand, Martek's artistic approach consists in reducing the text to a "pre-poetry" dimension where the writing is disassembled leaving its basic tools and elements, thus showing the pure power of representation as such; on the other, we can synthesise Akhunov's approach in his reduction of socialist political slogans into mantras which lose their meaning with repetition and acquire a new aura.

During the '80s, one of the leaders of Muscovite conceptualism, Dmitrij Prigov, focused on the pages of one newspaper, Pravda, as the frame for his graphic layout and the choice of single words (such as "Gorbachev," "Sakharov" or "Glasnost") which, unvaried, continuously return isolated against a bed of printed words. Quite opposite to this extreme and minimalist approach is the linguistic and alphabetic babel that Babi Badalov invents and transcribes incessantly following nomadic, permeable and trans-local procedures that stretch the boundaries on language itself. In Badalov's work, absurd neologism, visual and phonetic collages, unexpected puns and grammatically incorrect phrases always indicate an intermediate or transitory space. The artists of The Fourth Prose extend an invitation to experience not this or that content of language, but language itself, the faculty to speak per se.