Painshill Park will have its very own Hermit after an absence of nearly 260 years. Artist David Blandy, will live as a semi-contemporary version of the original Hermit in the newly restored Hermitage. During his stay at Painshill , David Blandy will maintain a special diary in the format of a comic book to record his thoughts and experiences. 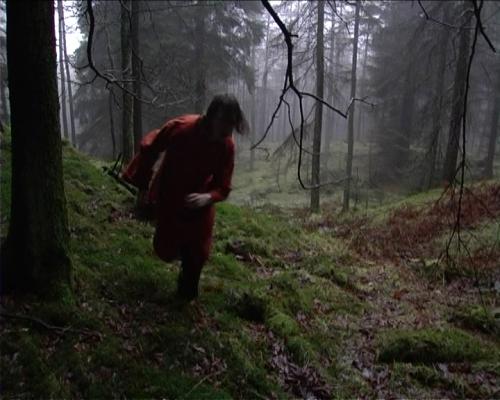 THE HERMIT RETURNS TO THE HERMITAGE

From Sunday, 30th May, until Sunday, 13th June, Painshill Park will have its very own Hermit after an absence of nearly 260 years. Artist David Blandy, will live as a semi-contemporary version of the original Hermit in the newly restored Hermitage.

Painshill Park is one of the 18th century's great landscape parks. Located near Cobham, Surrey, Painshill Park was the vision of the Hon Charles Hamilton, a young nobleman who returned from his Grand Tour of Europe inspired by all the art and architecture he had seen. Between 1738 and 1773 he enthusiastically set about transforming a strip of land near the River Mole into a 'pleasure garden' around which visitors could walk and be presented with a series of living pictures.

Blandy, dressed in the orange uniform of a Buddhist Shaolin Monk, barefoot, with long hair and glasses, will be found playing 1970's soul music on a portable record player. Blandy's Hermit is essentially a re-enactment of the original Hermit, who was employed by the Hon Charles Hamilton, the creator of Painshill Park, in the 1740s to "continue in the Hermitage for seven years, where he would be provided with a Bible, optical glasses, a mat for his feet, a hassock for his pillow, an hour-glass for his timepiece, water for his beverage and food from the house. He must wear a camlet robe, and never, under any circumstance, must he cut his hair, beard or nails, stray beyond the limits of Mr Hamilton's grounds or exchange one word with the servant". He was to be paid 700 guineas if he lasted seven years. Legend has it that he lasted three weeks before being found intoxicated at a nearby hostelry.

During his stay at Painshill, David Blandy will maintain a special diary in the format of a comic book to record his thoughts and experiences. He is also, in collaboration with artist Colin Crockatt preparing a complementary musical audio-tour of Painshill Park and composing a soundtrack that will highlight the film-set nature of the park. This will then be made available to visitors. As the listener tours the Park, there will be aural references to the different genres of film, from the martial arts epic of the Chinese bridge and suspense of the Grotto, to the espionage thriller of the Alpine Valley. The tour seeks to recontextualise the Park, hinting at the way that experience of every day is often mediated through ideas found in popular culture, and highlighting the Park's basis in fantasy. The audio tour will be available on request at admission.

GETTING HERE
By road: Painshill Park can be reached via the M25 (j10) and the A3. Exit at junction with A245 towards Cobham. Entrance to free car park is in Between Streets, Cobham, (A245) 200m east of the A245/A307 roundabout.
By rail: From Waterloo to Cobham or Weybridge. Taxis available.
By bus: Route 408 (Epsom Buses): Sutton/Leatherhead/Cobham (NOT SUNDAYS). Route 515 (Tellings Golden Miller): Kingston/Esher/Cobham/Wisley.