The Hugo Boss Prize 2004. In November 2004, Tiravanija was selected as winner of the prize. For the exhibition, he has created Untitled 2005 (the air between the chain-link fence and the broken bicycle wheel), a self-built low-power television station, to demonstrate how individuals can be active contributors to their own media culture, rather than mere consumers of it. 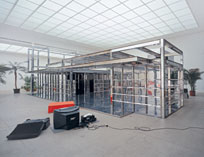 For the exhibition, Tiravanija has created a new installation entitled Untitled 2005 (the air between the chain-link fence and the broken bicycle wheel), in which the artist has set up a low-power television station within the museum's Annex Level 5.

This exhibition is sponsored by HUGO BOSS AG.

In November 2004, Tiravanija was selected as winner of the HUGO BOSS PRIZE 2004 from a shortlist of finalists which included Franz Ackermann (Germany), Rivane Neuenschwander (Brazil), Jeroen de Rijke and Willem de Rooij (Netherlands), Simon Starling (UK), and Yang Fudong (China). Established in 1996, the biennial award was conceived to recognize and support significant achievement in contemporary art.

In describing their selection, the HUGO BOSS PRIZE 2004 jury* explained, "Global in outlook yet local in practice, Tiravanija's works translate from culture to culture with remarkable ease, welcoming the regional traditions brought to the work by the context in which it is presented. We found this sense of intercultural exchange to be a critical component of Tiravanija's practice and one of the defining criteria for awarding him the 2004 Hugo Boss Prize."

Since the early 1990s, Tiravanija has explored a new aesthetic paradigm of interactivity. He has cooked and served food to his audiences, set up a recording studio in a museum, reconstructed his apartment inside a gallery for visitors' use, corresponded via the Internet while on an American road trip with Thai students, and provided opportunities for numerous other everyday activities to occur within art spaces where one would not expect to encounter them. Tiravanija is a catalyst; he creates situations in which visitors are invited to participate or perform. In turn, their shared experiences activate the artwork, giving it meaning and altering its form.

For his Hugo Boss Prize exhibition, Tiravanija has created Untitled 2005 (the air between the chain-link fence and the broken bicycle wheel), a self-built low-power television station, to demonstrate how individuals can be active contributors to their own media culture, rather than mere consumers of it. The installation recalls an earlier project exhibited in Italy, qualsiasi (tv), 2004, that highlighted the Italian phenomenon "telestreet," in which television broadcasts are transmitted over unused frequencies to a local community, circumventing traditional media networks. At the Guggenheim Museum, two rooms have been constructed within the gallery: a sealed glass vitrine holds a transmitter, and a plywood structure holds the receiver, a television. The transmitter is thus deemed preciousâ€”just as the Federal Communications Commission (FCC) regards the airwaves as precious. While the First Amendment protects the freedom of speech, it does not defend unrestricted access to all mechanisms of communication, such as the airwaves. A program is broadcast from a DVD player via the transmitter to the television across unused airwaves by means of the sending and receiving antennas. The found objects enlisted here as antennas indicate the grassroots nature of low-power transmission. To further demystify the broadcasting process, Tiravanija has surrounded the installation with texts describing the technology and its contentious regulation by the FCC in the United States, and he offers the viewer his own instructions for building at-home TV stations.

While a low-power broadcast could potentially reach viewers miles away, the transmission has been restricted to within this gallery's walls due to the many physical hindrances in New York City (such as interference with the signal from urban density and the common use of cable or satellite television) and the considerable legal and policy implications of broadcasting on Museum premises. Tiravanija's democratic desire for everyone to participate freely in his artworks stands in contrast to the FCC's strict regulation of this public resource. Through such a reality-based project, Tiravanija encourages our consideration of commonly held assumptions about methods of communication in this country and issues of free speech.

Artist's Biography
Rirkrit Tiravanija was born in Buenos Aires, Argentina, in 1961, and is based today in New York, Berlin, and Thailand. After high school in Bangkok, he studied at the Ontario College of Art, Toronto; the Banff Center School of Fine Arts, Banff, Canada; The School of the Art Institute of Chicago; and the Independent Study Program, Whitney Museum of American Art, New York. Tiravanija's installations and actions provide platforms for artistic, public, and private activitiesâ€”effectively blurring the boundaries that customarily separate them. His projects invite the public to enter into and literally engage with his work; in fact, the active participation of the viewer is necessary for the work to be fully realized. Tiravanija has exhibited widely at museums and galleries throughout the world. He has had solo exhibitions at such institutions as The Museum of Modern Art, New York (1997); Migros Museum fÃ¼r Gegenwartskunst, Zurich (1998); Wexner Center for the Arts, Columbus, Ohio (1998â€“99); Portikus, Frankfurt (2001); Secession, Vienna (2002); Galerie fÃ¼r Zeitgenossische Kunst, Leipzig (2003); Ikon Gallery, Birmingham, UK (2003â€“04); and Chiang Mai University Art Museum, Thailand (2004). Tiravanija's installation Untitled 2002 (he promised) was recently exhibited in New York, under the auspices of the Guggenheim Museum, in October 2004. A retrospective of Tiravanija's work, co-organized by Museum Boijmans Van Beuningen, Rotterdam, MusÃ©e d'Art Moderne de la Ville de Paris/ARC, and the Serpentine Gallery, London, is currently on exhibit in Paris through March 20, 2005.

Publication
In conjunction with the 2004 HUGO BOSS PRIZE, the Guggenheim has published a catalogue that features the work of all of the finalists, including special projects by each artist. The catalogue, designed by Sagmeister Inc., includes essays by Marcella Beccaria, Rosa Martinez, Francis McKee, Molly Nesbit, Hans-Ulrich Obrist, and Jan Tumlir, with an introduction by Joan Young. The catalogue is available for $19.95

Since 1995, HUGO BOSS has provided critical support to many of the Guggenheim Museum's programs and exhibitions. In addition to the HUGO BOSS PRIZE, the company has helped to make possible retrospectives of the work of artists Georg Baselitz, Ross Bleckner, Francesco Clemente, Ellsworth Kelly, Robert Rauschenberg, Matthew Barney, and James Rosenquist, as well as architect Frank Gehry.