Day-to-Day Data brings together a group of artists who take a methodical and scientific approach to questioning the world around them, and through the analysis and representation of data they collect, give a truly new and often amusing vision of our own daily existence. 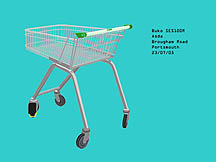 Day-to-Day Data brings together a group of artists who take a methodical and scientific approach to questioning the world around them, and through the analysis and representation of data they collect, give a truly new and often amusing vision of our own daily existence.

Much of the work in the show requires interaction from the audience; Lucy Kimbell will carry out a live survey on the people of Portsmouth, by asking visitors to the exhibition to respond to a question by removing and keeping different coloured sweets from the six large Perspex cylinders which form her physical bar chart. Hannah Brown's Daily Efficiency and Behavioural Analysis, Self-evaluation Checklists take a more personal approach, testing if visitors can match up to her vision of a perfect day. Visitors will be able to monitor their responses to Aspex Gallery's environs by using Christian Nold's Bio Mapping device. By combining GPS and lie detector technology the Bio Mapping device simultaneously measures fluctuating levels of stress and excitement together with geographic position, as you walk around the streets of Portsmouth. On returning to the gallery, visitors can upload the data collected onto a computer to create individual Bio Maps, showing which aspects of the city were particularly stimulating or stressful. An archive of Bio Maps will be on display throughout the exhibition.

Specially commissioned works by artists from the SCAN 9PIN project, which Aspex Gallery collaborated on, are featured in this stage of the exhibition. Hywel Davies's Basic Set takes one of the sounds (including humming, counting and clock mechanisms) collected at each of the 9 locations in the SCAN network. Davies presents the sound of running water from each location together with a basic composition using the concept of total serialism drawn from the map coordinates of each location in which the sound was recorded. James Coupe, Hedley Roberts and Rob Saunders present their blueprint, 9PIN++, for gathering basic data from the organisations in the SCAN network, and their resultant intelligent system which builds up a profile of activities across the different SCAN venues. Other works in the show include Helen Frosi's Life/Lotto; by studying hidden ciphers from her everyday life, such as the dregs of her coffee, Frosi will be endeavouring to come up with those lucky winning numbers each week. Ellie Harrison will carry out a daily data feed to the gallery, presenting personal data collected the previous day on a constantly evolving display wall, and Abigail Reynolds will create an installation made from domestic furniture, generated from her research into the history of the English word 'table'.

Visitors to the preview (Friday 16 September, 7-9pm) will have the opportunity to be counted by artist Sam Curtis. The performance will be a continuation of Curtis's attempt to single-handedly count all the people in the UK, launched at Angel Row Gallery in July 2005.

Bio
Ellie Harrison was born in London in 1979 and is currently based in Nottingham. She graduated with a Postgraduate Diploma in Fine Art from Goldsmiths College in 2003 and with a BA in Fine Art from Nottingham Trent University in 2001. In 2005 Ellie has exhibited in Piccadilly Circus Underground station as part of the Platform for Art programme. In 2004 Ellie had a solo show at the Wallner Gallery, Nottingham and completed a commission for Transition art programme at Victoria Baths, Manchester. In 2003 she exhibited at the Science Museum, London as part of the Wellcome Trust's exhibition Treat Yourself.