Absent Friends. The artist presents various works, at once mysterious and deeply ambiguos. They contain penetrating and disturbing observations about the paradoxes of the human condition and they explore the complexities of gender, sexual orientation and race. 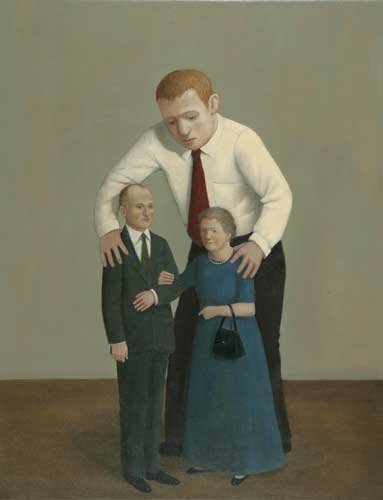 The forthcoming exhibition of paintings by John Kirby at Flowers Central, opening on 12 October, focuses on recent works that develop his most celebrated themes. The complexities of gender, sexual orientation and race are explored with insight, painful honesty and profound emotion.

These important works, at once mysterious and directly engaging, are deeply ambiguous. Thus, in â€˜Birthday Party,â€™ the seated figure is clearly male, but his standing partner, also male, appears in a girlâ€™s party dress.

The transvestiteâ€™s solemn and disturbed expression adds tp the enigmatic mood of the painting.

Atmosphere is fundamental to the impact of Kirbyâ€™s artistry. In â€˜After the Fallâ€™ two tiny men in dark suits stand beneath a symbolic, dominating tree, and awkwardly hold hands. In â€˜Man with Two Masksâ€™ the figure, a black man, stands stiffly with a tentative look in his eyes as he seeks the right white identity to assume. Anxiety, personal uncertainty and self-doubt pervade the images in these beautiful and haunting pictures.

They contain penetrating and disturbing observations about the paradoxes of the human condition, an over-arching theme that animates Kirbyâ€™s oeuvre, and has never been more challenging than in these new works.

The next exhibition at Flowers Central will be â€˜Eduardo Paolozzi: Sculptures from the 1960sâ€™ running from the 8th November to the 3rd December 2005.