Seven consecutive nights of performances. The works include a new piece by the artist created for this project, as well as her renditions of seminal performances by Vito Acconci, Joseph Beuys, Valie Export, Bruce Nauman, Gina Pane, and others from the '60s and '70s. 'Seven Easy Pieces' examines the possibility of redoing and preserving such important performative work for generations to come. 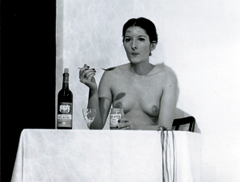 From November 9 through November 15, the Solomon R. Guggenheim Museum presents Marina Abramović: Seven Easy Pieces, seven consecutive nights of performances in the Frank Lloyd Wright rotunda from 5 PM to 12 AM.

The works include a new piece by Abramović created specifically for this project, as well as her renditions of seminal performances by Vito Acconci, Joseph Beuys, Valie Export, Bruce Nauman, Gina Pane, and others from the 1960s and â€™70s.

Since the beginning of her career in Belgrade during the early 1970s, Marina Abramović has pioneered the use of performance as a visual art form. The body has always been both her subject and medium, and the parameters of her early performances were determined by her endurance. Exploring the physical and mental limits of her being, she has withstood pain, exhaustion, and danger in the quest for transformation.

In Seven Easy Pieces Abramović reenacts seminal performance works by her peers dating from the 1960s and â€™70s, interpreting them as one would a musical score and documenting their realization.

The project is premised on the fact that little documentation exists for most performance works from this critical early period; one often has to rely upon testimonies from witnesses or photography that shows only portions of any given piece.

Seven Easy Pieces examines the possibility of redoing and preserving such important performative work for generations to come.

The works to be performed include:

Wednesday, November 9: Bruce Nauman, Body Pressure (1974), Galerie Konrad Fischer, DÃ¼sseldorf. Nauman constructed a false wall nearly identical in size to an existing wall behind it. A pink poster with black typeface invited visitors to perform their own action by pressing against the wall.

Friday, November 11: Valie Export, Action Pants: Genital Panic (1969), Augusta-Lichtspiele, Munich. Wearing pants with the crotch removed, Export walked through the cinema during a film screening, offering the spectators visual contact with a real female body. Walking up and down the aisles among the mostly male patrons, she challenged them to "look at the real thing" instead of passively enjoying images of women on the screen.

Saturday, November 12: Gina Pane, Self-Portrait(s) (1973), Galerie Stadler, Paris. Pane lay on a metal bed above lit candles. She then made incisions with a razor blade in the skin around her fingernails and lips while slides of women painting their nails were projected on the wall. Her back turned to the audience, she recited "They wonâ€™t see anything" while a camera recorded womenâ€™s reactions in the audience. Facing forward again, she gargled with milk and spit it into a bowl, until the milk and her blood mixed.

Sunday, November 13: Joseph Beuys, How to Explain Pictures to a Dead Hare (1965), Galerie Schmela, DÃ¼sseldorf. With his head covered in honey and gold leaf, Beuys cradled a dead rabbit, showing it pictures on the wall and whispering to it. He wore an iron sole on his right foot and a felt sole on his left.

Monday, November 14: Marina Abramović, Lips of Thomas (1975), Galerie Krinzinger, Innsbruck. Abramović ate a kilogram of honey and drank a liter of red wine out of a glass. She then broke the glass with her hand, incised a star in her stomach with a razor blade, and whipped herself until she "no longer felt pain." She lay down on an ice cross while a space heater suspended above caused her to bleed more profusely.