In this exhibition the photographs depict 19th century mathematical and mechanical models from collections at the University of Tokyo. Sugimoto has photographed each model under the same lighting conditions and from the same perspective. 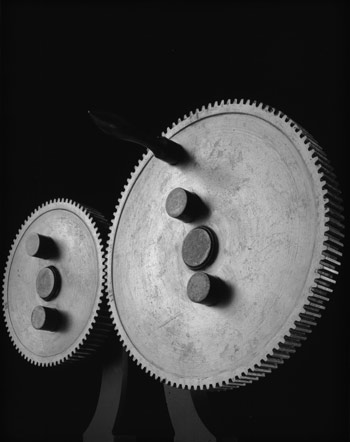 Richard Levy Gallery is pleased to present Hiroshi Sugimoto: Conceptual Forms. The photographs in this exhibition depict 19th century mathematical and mechanical models from collections at the University of Tokyo. Taken by the beauty of the forms, Sugimoto has stated, "These machines and models were created without any artistic intentions Art is possible without artistic intention and can be better for it."

For this series, Sugimoto has divided his subjects in to two categories. The plaster models in Mathematical Forms were designed to provide concrete visual examples of complex mathematical equations. They were produced in Germany in the late 19th century, and were distributed as teaching aids. The Mechanical Forms served a similar purpose by demonstrating the movements of basic machines.

Sugimoto has photographed each model under the same lighting conditions and from the same perspective. Given the abstract qualities of the subjects, this consistency and repetition begins to erase our sense of scale and time within the images. The forms are absolute and monumental. The sensuous biomorphic curves of the Mathematical Forms relate at once to architecture, ancient Grecian statutes, and the modern sculpture of artists including Jean Arp and Barbara Hepworth. The prototypical Mechanical Forms are simultaneously nostalgic relics and harbingers of modernity.

Hiroshi Sugimoto was born in Tokyo, Japan in 1948. He has been the subject of numerous publications and important exhibitions in museums and galleries around the world. The first large scale retrospective of his work in the United States is currently on view at the Hirschhorn Museum and Sculpture Garden in Washington, D.C.