Thursday-Saturday, 12-6pm; or by appointment

Lightner crops and enlarges the images then removes the gradations of color. It's a technique reminiscent of both punk zine culture - the photocopied image reduced to ultra-high contrast - and the separations for a Warholian silkscreen. 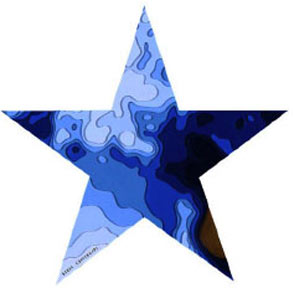 Pay your respects to the vultures...

Lightner was drawn to the anthropomorphic names of the explosions: each with a surname (the test series) and a given name (for each specific test). And yes, many of the names ironically said, "porn star." Why not juxtapose a Dakota Redwing with a Nick Savage or a Steve Pierce? Tracing the dotted line from le petit mort to grand, Lightner embraced the stars of dubious and seedy celebrity side-by-side with the explosions as bright as our very own star, both slamming across the screen with some striking visual parallels (don't pretend you can't see some of the more interesting parts of the male anatomy in those mushroom clouds!).

On the edge of each Superstar, Lightner has inscribed a Biblical quotation from Revelations. By attaching the quotations to images derived from nuclear weapons tests and gay porn Lightner recontextualizes the apocalyptic imagery, bending it into an interrogation of the power and horror of nuclear weaponry and our ability (and unfortunately, national will) to wage a modern war as well as the insidious power and horror of the AIDS epidemic. Some of the quotes, like that assigned to the piece titled after the Priscilla Plumbbob nuclear test, "Men will desire to die, and death will flee from them," can be applied equally to the slow deaths we've witnessed of victims of radiation poisoning of the victims of Hiroshima and Nagasaki and in the more recent past, of AIDS sufferers.

To quote the Bible further, Ecclesiastes "eat, drink and be merry, for tomorrow we die," is the lite version of "die now, live later." And it's in this spirit that Lightner mischievously and with ironic glee applies other quotations from one of the Biblical chapters beloved by conservative Christians to the elevation and glorification of the poster children for hedonism, gay porn stars. For the piece titled, "Matt Sizemore," the quote reads, "He even makes fire come down from heaven on the earth." Quotes applied to others of the porn-based Superstars include, "Twenty-four elders fell down and worshiped Him," and, "Behold, a white horse... & he went out conquering & to conquer." Indeed.

"Pay your respects to the vultures," is the first half of a line from a Coil song ("Amethyst Deceivers"). The second half of the line is, "...for they are your future." In a(n) (art)world that is all too ready to consume and profit from the output of artists who live with HIV or have lived with and/or died from AIDS, the show title is biting, if Lightner's work is ultimately as playfully skewering as it is barbed. Lightner's continued mining of identity in post-confrontational ways (confrontation played itself out so long ago) allows him to continue the conversation rather than spewing diatribes, all the while giving all the pretty vultures plenty on which to chew. Lisa Radon.