A thirty-year retrospective featuring paintings, architectural models, and furniture by the visionary architect 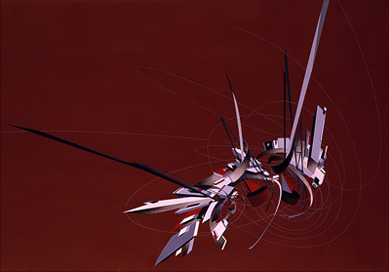 Zaha Hadid, a thirty-year retrospective of the work of one of today’s most innovative architects, will be presented at the Solomon R. Guggenheim Museum, New York, from June 3 through October 25, 2006. The first woman to be awarded the distinguished Pritzker Architecture Prize, in 2004, Hadid stands at the forefront of an architectural avant-garde that tests the boundaries of architecture, urbanism, and design. The exhibition provides a comprehensive examination of the architect’s theoretical and academic work, as well as her built projects worldwide, and includes paintings, models, and furniture.

The Installation
True to the interdisciplinary nature of her work, the exhibition presents Hadid’s creations in a range of mediums, including paintings, architectural models, urban plans, animations, furniture, and design objects. The exhibition is organized chronologically, and spans the entirety of the architect’s thirty-year career, from early student projects to recent built works. This chronology is complemented by several examples of Hadid’s unique thematic approach to specific architectural problems. These themes, which include formal design concepts such as fields, folds, ribbons, and clusters, link projects from different periods. An unfolding black ribbon has been integrated into the exhibition design on Ramp 4, where the works are also grouped by media: black paintings and white relief models.

Painting as “Testing Field"
Early in her career, Hadid followed Constructivist ideals, and her student projects reveal the influence of Kazimir Malevich’s Suprematism. Her earliest architectural renderings presented broken, compound angles whose acute spaces expressed a dynamic tension. These projects, shown mainly on the lower ramps, were most commonly represented in large format paintings where the figure of the building blurs into the surrounding forms. For Hadid, conventional means of representing architecture—floor plans, sections, axonometric and isometric studies—were inadequate for the new spaces and forms she envisioned, so she turned to painting as the primary medium of her three-dimensional research. Suspending the body of the viewer at different times and in different spaces, her paintings challenge gravity and the logic of a single perspective. It is through this method of analyzing and designing a project based on multiple viewpoints that Hadid generates the unfolding, distorted volumes that give shape to her buildings. Her exploratory paintings send buildings in motion, enabling her to focus on discrete frozen moments of the volume’s movement through space. Her buildings often recreate one or a series of such frozen instants, and seem to capture the sensation of suspended movement. Hadid considered these works “testing fields" for her experimental ideas in which she developed strategies that would become central to her approach to built work and the relationship of architecture to its site.

One example is the project for the Zollhof 3 Media Park (Dusseldorf, Germany, 1999-2003, unbuilt), whose many buildings appear to float, explode, shift, and stack. The Media Park began as a form that stretched along a harbor. As the building was pulled taut, it snapped in two places and splintered at one end, with fragments radiating outward at different velocities, creating the structure’s several glass slab towers. The result is a complex of several buildings that respond to the site in an unpredictable manner, offering unexpected views and points of access to the harbor.

For Zaha Hadid, architecture cannot be isolated from its surroundings. In order to analyze a building’s immediate environment, she developed two new mediums, her unique black paintings and paper relief models, the latter a combination of drawing and modeling techniques. Both mediums allow her to express and analyze the direction and orientation of dynamic forces that already inhabit an urban site. The paintings and reliefs give those forces material shape. Interpreted as planes, they converge to create the volumes that ultimately form the building.

The Vitra Fire Station (Weil am Rhein, Germany, 1990-94), Hadid’s first built project, established that her daring architecture could in fact be built. The project was intended to structure its site, giving identity and rhythm to the adjacent street. The horizontal thrust of its facade is echoed in a series of vertical forms that seem to tilt, move, break, and even want to fly away. Multiple views and entrances to the station allow a continuous exchange between the interior and exterior, and the building achieves a sense of transparency.

“Fluid Fields"
In Hadid’s more recent architecture, represented on the upper ramps of the museum, the angularity of the early projects has given way to sinuous, more plastic forms, where walls, floors and ceilings seem to blend and expand, creating a sense of constant transformation or “fluid fields." Her designs defy conventional ideas of space, architecture, site, and urbanism, and encourage discovery and unexpected encounters. Her goal is to generate curiosity through design and facilitate social and cultural interaction.

Although they are generally considered distinct mediums, Hadid wishes to integrate architecture and urbanism. Through her research, she discovers new ways of accessing a building and anchoring it to the ground, often resulting in a fresh understanding of the project’s urban condition while simultaneously revitalizing the site by contributing spaces for new activities. In some cases, she intensifies functions or activities of existing public spaces by inserting buildings that will absorb that activity.

Hadid’s Lois and Richard Rosenthal Center for Contemporary Art (Cincinnati, 1997-2003) is not a traditional museum that isolates and protects the artwork within. Instead the building blends with its urban context through an “urban carpet": the museum’s entranceway floor seems to emerge from the plane of the street, which, curving slowly upward, eventually becomes the building’s organizing element. The exhibition galleries interlock like a cluster of three-dimensional concrete pieces creating a radical departure from the traditional linear succession of gallery spaces.

The “urban carpet’ relates to Hadid’s ongoing exploration of new possibilities for public space. Her latest built work, the Phaeno Science Center in Wolfsburg, Germany (1999-2005), lifts from the ground on forms resembling a ship’s rudder, liberating a new space below the hull of the building. With its gentle, smooth surfaces, this almost subterranean space stands out from the more angular, aggressive forms of the surrounding city, creating an unusually welcoming, organic environment. This “artificial landscape" built on privately owned property contributes new textures to the public space and enhances the quality of civic life.

While certain buildings such as museums, factories, and opera houses tend to be easily identifiable, and generally conform to a rather standard template of features, Hadid forgoes established architectural prototypes. Instead her architecture results from several considerations: the program (or purpose) of a building, the forces and particular situation of its site, and a more general response to a global condition.

The fluid field form also allows a building to be organized similarly to a city. The BMW Plant Central Building (Leipzig, Germany, 2001-05) for example, presents a new multifunctional industrial model. A production line of cars on two conveyor belts passes over open office spaces conceived as platforms. This architecture allows simultaneous activities, while facilitating open communication between the factory’s various departments. If previous buildings were seen as agents of urban transformation, this format also encourages new forms of social interaction in the workplace.

In her work in all disciplines, Hadid consistently makes use of the latest technological and industrial innovations. She designs with one eye on the future, expanding the traditional boundaries of art, architecture, and design into the unknown.

Hadid’s “silver paintings," her most recent graphic technique, resemble polished metal or mirrors. This effect is created by the works’ polyester skin, which has been treated with chrome and gelatin. The images are digitally generated and captured in an instant of their virtual state. Once they are printed, they are hand-painted in order to emphasize the reflectiveness or opacity of different architectural elements. Any given project comprises several silver paintings, and the many versions serve to document the project’s development.

In the Tower 7 Gallery, for the Z-Island kitchen, Hadid explores the concepts of “fluidity" and “seamlessness," as embodied in natural phenomena like melting ice and the flow of glaciers. Her proposal of an “intelligent environment" is based on the work’s ability to respond simultaneously to basic and innovative functions of a kitchen. The incorporation of multimedia elements such as television screens, the internet, and audio systems transforms Hadid’s kitchen from a place that appeals only to the sense of taste into one that one equally excites the user’s senses of sight and hearing.

Biography
Born in Baghdad in 1950, Zaha Hadid studied in Switzerland, England, and Lebanon. She pursued architectural studies at London’s Architectural Association in 1972 and received her diploma in 1977. Shortly after, she joined the Office of Metropolitan Architecture (OMA) with her previous professors, Rem Koolhaas and Elia Zenghelis. She opened her independent practice in London in 1979. In 1982 she garnered international recognition when her submission The Peak won the competition for a leisure club in Hong Kong. The project was never completed, but since then, several audacious buildings have given material form to her search for challenging ideas. In 2004, Zaha Hadid was the first woman to receive architecture’s most prestigious award, the Pritzker Architecture Prize. Today, using London as the base for her firm, her vision is being transformed into suggestive buildings all over the world.

Catalogue
A fully illustrated catalogue of the exhibition is also being produced ($50 softcover only). Color illustrations of designs and models, previously unpublished paintings, and photographs of buildings at all stages of construction will accompany essays by leading authorities on Hadid’s work. Contributions by authors Joseph Giovannini, Detlef Mertins, Germano Celant, and Patrik Schumacher will complement two unpublished interviews between Zaha Hadid and Alvin Boyarsky. The catalogue is published by the Guggenheim Museum and will be distributed in North America by D.A.P./Distributed Art Publishers.

PUBLIC PROGRAMS
The following is a list of education and public programs that will complement Zaha Hadid. Unless otherwise noted, tickets for public Programs are $10 ($7 for members, students, and seniors). For more information, call the Box Office at (212) 423-3587.

Symposium:
“Contamination: Impure Architecture." Saturday, June 3, from 10 AM-4 PM
On Saturday, June 3, the Guggenheim and Oldcastle Glass will co-host a one-day symposium titled “Contamination: Impure Architecture." As a product of a culture, a time, and a process, architecture is contaminated and contaminates. This “impure architecture" may reflect and affect how we view civilizations today; it also brings into question our concepts of truth, ideality, utopia, and progress as embodied in the built world. Join Kunle' Adeyemi, Elizabeth Diller, Greg Lynn, Farshid Moussavi, Bernard Tschumi, and other key architectural theorists and practitioners in a consideration of the transformative power of contamination. The symposium is organized by Cynthia Davidson and Log magazine and made possible by Oldcastle Glass. Free to the public. Space is limited; reservations required. To RSVP, call 212 423 3684, or e-mail corporateRSVP@guggenheim.org.

A Curatorial Eye
July 11 & 18, 11am; Free with museum admission
Mo'nica Rami'rez-Montagut, Assistant Curator of Architecture & Design, will take visitors on a tour of Zaha Hadid from the curator’s perspective.

This exhibition is made possible by Oldcastle Glass.

The Leadership Committee for Zaha Hadid is gratefully acknowledged.