Thursday-Saturday, 12-6pm; or by appointment

The Adventure of Claudzilla. As a performance-installation artist, the goal of my practice is to explore master cultural narratives and conceptual framing devices as they define and influence personal identity. The latest body of work developed out of an aspect of the previous body of work which focused on biotechnology. 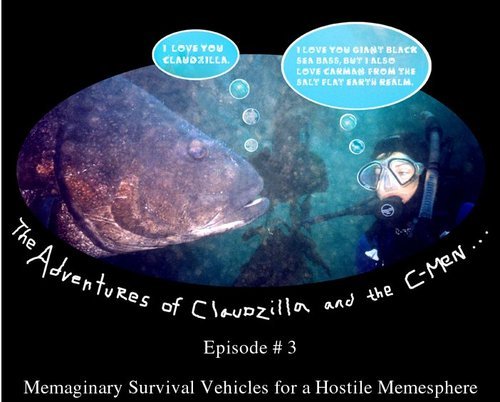 The Adventure of Claudzilla

As a performance-installation artist, the goal of my practice is to explore and research master cultural narratives and conceptual framing devices as they define and influence personal identity. The latest body of work developed out of an aspect of the previous body of work which focused on biotechnology and the master framing device of Scientific Research. In this last series, the potential possibilities for mutable identity by way of genetic/robotic engineering were explored. This series landed at the feet of the idea of cultural evolution as a mechanism by which biological evolution could be superseded. Here we operate in the land of the meme rather than the gene.

The master framing device of cultural evolution has led to a desire to explore identity, permeability and mutability through the realm of pop-culture virtuality: the internet, gaming, comics and so on, where sci-fi fantasies and fears about mutation, abnormal superpowers, violence, desire and destruction are memetically sequenced. This arena seemed like the most logical next step for exploring identity as a memetic construct and was the only genre that made any sense as a way to process what I was experiencing in my own personal life and simultaneously with the political world at large. If the government of the U.S. could enact its own absurdist comic book-like action adventure drama, well then so could I, hence, The Adventures of Claudzilla and the C-Men.

In this age of pre-emptive war, Claudzilla purposely references Godzilla as an icon of nuclear destruction. Claudzilla is a scuba diving suicide bomber creature from the kelp forests. The C-Men, a take off on X-Men, are iconic dysfunctional past, present, and future-possible lovers either real, fictionalized or imagined. They include: Crackman, Crankman, Christman, Crapman and Carman, to name a few. The sphere in which they operate is the current memesphere. Instead of the term action figure, I have created the neologism mematar which is a combining of meme + avatar. A mematar would be the physical embodiment of a particular meme. Claudzillas C-Men are representations of the orbiting and competing memes that have tried to influence the mind of Claudzilla.

As a performance artist concerned with conceptualizing identity, I am exploring the ways in which my own identity can be framed as a collection of memes. The episodes in the series so far consist of the following: Episode 1, performed at Track 16 Gallery in November 2005, Dive Attack Plan RRR! (Captain LeKong and Claudzilla inadvertently blow up Los Angeles while searching with their crew for terrorist C-Men amongst off-shore oil rigs), Episode 2, presented for COLA 2006 at the Barnsdall Municipal Art Gallery, Dream Wars in the LA Memesphere: from kelp forests to salt flats, the secret life of mematars revealed: Claudzilla and Carman in love, Episode 3, now being presented at L2Kontemporary, Memaginary Survival Vehicles for a Hostile Memesphere. All three of these episodes are being presented as some combination of performance, installation, sculpture and video, however, the ultimate goal is to create a book out of all this material: a memologue.