The artist's painting is always black and white, always oil and acrylic on canvas and images that the artist borrows as references, are taken from film and literature. There are no clear-cut messages in his work, rather a subtle reference and a tragic underlying mood of light and shadow that envelops it. 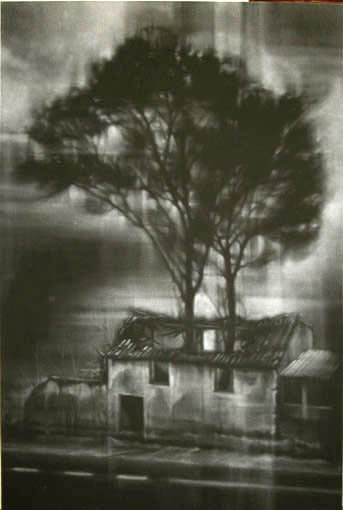 Galeri'a Toma's March gets its 2006-7 season off to a start with a show of recent work by Chema Lopez (Albacete, 1969). Titled Los Murmullos, or murmurs, the name chosen by Juan Rulfo for the first version of his novel Pedro Pa'ramo, a key influence on the painter.

Though relatively young, Lopez already has a considerable career as a painter to his credit with many solo shows since 1991. His work has been seen in several galleries and art centres such as Espai d'Art Contemporani in Girona, Centro de Arte Contempora'neo in Granada, the Museo Municipal in Albacete, and the galleries Postpos, My Name's Lolita Art, El Purgatori and i Leonarte in Valencia. Since 1999 he has also shown work at ARCO, the art fair in Madrid.

Chema Lopez’s painting is always black and white, sometimes white over black, always oil and acrylic on canvas, executed with exceptional technical mastery rooted in photography and images that the artist borrows as references, taken from film and literature. Visual metaphors on the work of Melville, Faulkner, Hobbes, or films by Welles, Scorsese or Wenders. With these elements Chema Lopez elaborates a body of work reflecting and inducing reflection on the world, society, power relationships, love, hate, good and evil. He uses black and white to emphasise the dramatic tone of his vision of these themes in paintings that bring together beauty and horror. Themes always underpinned by a huge wealth of subtleties left open to different interpretations, presenting a complex level of reading corresponding to the illegibility of the world. There are no clear-cut messages in his work, rather a subtle reference and a tragic underlying mood of light and shadow that envelops it.

His work is featured in important private and public collections such as Chirivella-Soriano Foundation and the Marti'nez Guerricabeitia Collection at the University of Valencia.

* For an overview of earlier work take a look at his web: http://www.chemalopez.com

Paul Muldoon
Dancers at the Moy