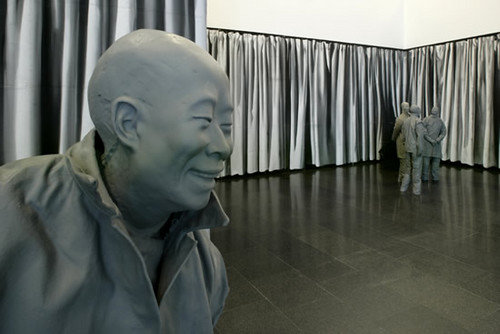 From the mid-sixties to the end of the seventies, the profound transformations that took place in our society brought with them a change in paradigm. While the basic element that had constituted our system of perception and understanding until that time had been vision, from the eighties this was gradually replaced by recognition of the linguistic structure of artistic production. Vision, or optical perception, had guaranteed modernity the autonomy of artistic species, the search for their specific nature and the cancellation of any kind of “otherness"; but the change of paradigm re-introduced narrative, figuration and theatricality, transforming the spectator into an “agent" and treating the subject as a structural element of the piece. In other words, room was made for the “other" that would no longer be hijacked by that “universal vision" required until then by modernity.

This change also led to art no longer being considered a mere object but rather something to be appreciated as an institution, with the consequent recognition of its discursive nature and of the possibility that elements not necessarily artistic (such as gender and social issues) could be considered an area for intervention. In short, the diversity of time replaced the uniformity of space.

Some of the works and artists included in this new presentation already formed part of MACBA collections, but there have also been a huge number of new acquisitions in 2006 through purchases made by the MACBA Foundation, deposits and donations. The novelties presented this year in the MACBA Collection are intended to demonstrate this change in paradigm through works by Chantal Akerman, Euge'nia Balcells, John Baldessari, Stanley Brouwn, James Coleman, Oyvind Fahlstrom, Dan Graham, Joaquim Jorda', Antoni Llena, Anish Kapoor, Mike Kelley, Cildo Meireles, Mario Merz, Herminio Molero, Juan Munoz, Raimundo Patino, Cierna Pavlina Fichta, Manolo Quejido, Jo Spence o Krzystof Wodiczko. The exhibition also presents artists who, from a position in current artistic production, continue to expand upon those ideas that led to the change in paradigm, namely Maja Bajevic, Danica Dakic, Tacita Dean and Gabriel Orozco, among others.

Throughout the twentieth century, Cadaque's attracted avant-garde artists and other intellectuals who spent their summers there. Pablo Picasso, Man Ray, Marcel Duchamp, John Cage, Richard Hamilton and Dieter Roth, among others, spent long periods of time in the Costa Brava town.

Lanfranco Bombelli, an artist and architect of Italian origin, opened the Galeri'a Cadaque's in 1973 and in this context of the avant-garde. In the seventies and eighties the gallery was of great importance in Catalonia as an initiator, producer and promoter of the art of the time, and initiated not only temporary exhibitions, such as the collaborative works executed by Richard Hamilton and Dieter Roth in Cadaque's in 1976 and 1977, but also in situ works related to Cadaque's, such as the project Cadaque's, Canal Local (1974) by Muntadas and the action Flauta i trampoli' (1981) by Antoni Miralda.

Through key works of its founder’s collection, the exhibition summarises and reviews those years of activity and analyses the importance of the gallery in the context of Cadaque's as a peripheral nucleus of the twentieth-century avant-gardes.

The exhibition, that forms part of the MACBA Collection, stresses the relations between this collection and the programme of the Galeri'a Cadaque's, which, among its heterogeneous activities, deployed four artistic lines: constructivism (especially Swiss concrete art), pop art, the avant-gardes of the sixties and seventies, and local artists, represented by Catalan abstract painting and the new tendencies in Catalonia of the seventies and eighties.