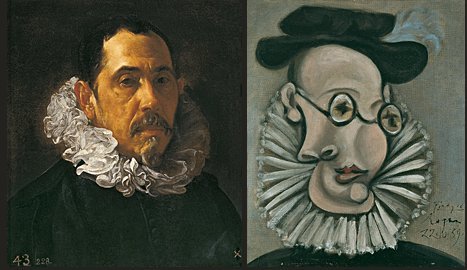 The fifteen sections of the exhibition are titled: Monks, Bodegones, Landscapes, The Domestic World, Women in Public, Weeping Women, Virgins and Mothers, Nudes, Childhood, Monstruos, Knights and Ghosts, Ladies, Crucifixions, The Fallen, and Flyers. Filling the entire Frank Lloyd Wright rotunda and several of the museum’s tower galleries, the sections are comprised of numerous works from European and North American lenders and over 65 paintings from museums and private collections in Spain, including 15 major works from Museo Nacional del Prado and 10 works from the Museo Nacional Centro de Arte Reina Sofi'a in Madrid. Especially significant works in the exhibition include: Francisco de Zurbara'n’s magnificent Saint Hugh in the Refectory (ca. 1655) in a rare appearance outside of Spain, Juan Sa'nchez Cota'n’s Still Life with Cardoon and Parsnips (ca. 1604), Joan Miro'’s The Table (Still Life with Rabbit) (1920-21), El Greco’s The Vision of St. John (ca. 1608-14), Bartolome' Esteban Murillo’s The Virgin of the Rosary (ca. 1650-55), Salvador Dali'’s Dream Caused by the Flight of a Bee around a Pomegranate, One Second before Awakening (1944), Francisco de Goya’s The Duchess of Alba (1797), Jose' de Ribera’s Apollo and Marsyas (1637), as well as nearly 35 works by Picasso, including his important Portrait of Jaime Sabartes (1939) and The Infanta Margarita Mari'a from The Maids of Honor (Las Meninas), after Vela'zquez (1957).

Until recently, art historians bracketed Spanish painting between El Greco and Goya, maintaining that twentieth-century, avant-garde movements such as Cubism and Surrealism—both of which were pioneered by artists of Spanish origin—broke completely with the traditions that preceded them. Today we have sufficient historical perspective to see that, despite their revolutionary aesthetic leaps, the great artists of the early twentieth century were nourished by traditional models that were, furthermore, local in character. These models found their source in the Spanish School of the late sixteenth and seventeenth centuries, an era commonly regarded as the Golden Age of Spanish painting. The aesthetic styles developed during these years—from the visionary opulence of El Greco to the intimate naturalism of Vela'zquez—dominated artistic production in Spain throughout the following two-and-a-half centuries, as the nation’s imperial power declined and Spain became increasingly isolated internationally. Even Goya, arguably the greatest Spanish painter of the nineteenth century, could break free from his forerunners only by facing them square in the eye: as the French romantic poet The'ophile Gautier observed, “in his desire for artistic innovation, Goya found himself confronted by the old Spain."

By the late nineteenth century, following Goya and the spirit of romanticism, a national critical conscience had awoken in Spain’s artists and intellectuals, but the country’s antiquated political, social, and economic structures largely thwarted this modernizing impulse. Accordingly there began a long period of exile or simple emigration, which marked the careers of all the twentieth-century masters exhibited here. During this time many stereotypical treatments that had formed in the wake of Spain’s Golden Age were cast in a new light, as Europe rediscovered the art of the Spanish School and began to write its history for the first time. Chief among these was Spain’s resolute anticlassicism, which was reflected in its timeless customs, its culture, and its art, and which came to be seen as a source of resistance to the overwhelming homogeneity associated with an industrialized, modern world. Thus as Spanish artists stigmatized the ideological cliche's of traditional Spain, they also realized that formal innovation could only come if these same aesthetic values were brought up to date. It is this endless return and reappropriation on a formal and iconographic level that binds together the works of Spanish artists, from Picasso, reaching back through Goya, to the masters of the Golden Age.

The origins of each of the exhibition’s themes lie in the culture of sixteenth-century Spain, which was itself heavily influenced by the Counter-Reformation. This religious impulse sets the tone for many of the works in the exhibition, even in a genre as apparently worldly as the still life, which are featured in the largest section of the exhibition, Bodegones. A uniquely Spanish term for still life, bodego'n refers to the pantries, or bodegas, where the pictured objects were kept. Early examples by artists like Juan Sa'nchez Cota'n and Francisco de Zurbara'n feature humble objects inscribed with transcendental values but depicted with the utmost naturalism against an inky black background that alludes to the void beyond worldly concerns. The fruits, vegetables, and other perishables in many of these paintings evoke a sense of transience even as they are precisely arranged along rigid sills, implying the timelessness of mathematical law. Over 300 years later, this “mineral" quality would serve as an important precedent for the Cubists, in particular the fragmented style of Juan Gris. In his canvases, as in much of Picasso’s early work, the transcendent geometries of the seventeenth century take on a modern, wholly unreligious character, updated to a new cultural moment but still constituting an inescapable historical model.

In the section titled “Childhood" the exhibition examines typical representations of children over the past five centuries. Until the late eighteenth century, Spanish society distanced itself intellectually and emotionally from the notion of childhood, due largely to the high rate of infant mortality and prejudicial views that childhood was dangerously close to original sin and brute nature. Thus, when portraying children, usually for heraldic reasons, painters tended to exaggerate potential adult features to the point of caricature. The first painter to break free from this rigid, theatrical stance was Vela'zquez, who revealed childhood as an essentially fragile and aleatory state every bit as interesting as any other stage of life. His contemporary Bartolome' Esteban Murillo did much to formalize this humanizing approach through a remarkable series of genre paintings, but it was Goya who first matched Vela'zquez’s skill at handling this subject. Operating under Enlightenment ideas, Goya presented from an existential perspective, as a moment of purity or innocence. Nearly a century later Picasso would pick up this thread, painting his own offspring with perceptive grace as he explored the dignity of childhood.

During his visit to the Prado in 1865, Edouard Manet observed that the Spanish School had made its greatest contribution of all in the field of the portrait, which took on a distinctive naturalism in the hands of painters such as El Greco, Vela'zquez, Zurbara'n, and Juan Carreno de Miranda. The section of the exhibition entitled “Ladies" explores the shifting terrain of this genre over the past five centuries with particular attention to the means by which female sitters were portrayed. In the seventeenth century these works were dominated by a dualistic notion of femininity as both modest and immodest, which was articulated through the combination of carefully displayed luxury items and a subtly introspective countenance. In the highly moralized context of the day, this duality was viewed with ambivalence: the splendid attire that a true “lady" donned in public demonstrated both her elevated social rank and her skill at handling appearances with care, but was always viewed with a degree of suspicion, as if social ostentation covered over coquettishness, seduction, deceit, or libertinage. This ambivalence became essential to Goya, who in the context of the Enlightenment managed to shatter these conventional stereotypes by combining them in defiant, individualistic portraits of duchesses and other prominent women. In the twentieth century, even as the figure of the lady gave way to new social roles, the old, paradoxical understanding of femininity persisted in the works of Picasso and his avant-garde colleagues, who represented women as dual sources of pleasure and peril.

Through these themes and the twelve others that appear in the exhibition, Spanish Painting from El Greco to Picasso: Time, Truth, and History provides a revolutionary new perspective on Spanish painting of the past five centuries. These carefully chosen comparisons reveal previously unseen links between artists working in very different historical contexts, even as they bring the exquisite paintings of Spain’s Golden Age into the curving ramps of the Guggenheim Museum for the first time. Together with works by the masters of the avant-garde, the incredible power and beauty of the Spanish tradition bursts forth all the more brilliantly.

Spanish Painting from El Greco to Picasso: Time, Truth, and History has been curated by Carmen Gime'nez, Curator of Twentieth Century Art at the Guggenheim Museum, and Francisco Calvo Serraller, Professor Chair of History of Art at Madrid’s Complutense University, and former Director of Museo del Prado, who for many years have been working intensely, both jointly and individually, on the study and dissemination of the history of Spanish art. Their joint projects include Cinq sie'cles d’art espagnol, a major retrospective shown in Paris in 1987, and the recent Picasso. Tradicio'n y vanguardia, held simultaneously at the Museo Nacional del Prado and the Museo Nacional Centro de Arte Reina Sofi'a, Madrid. Carmen Gime'nez, who was the first director of two museums she helped to create, the Centro de Arte Reina Sofi'a and the Museo Picasso Ma'laga, has also curated other important exhibitions on Picasso, including Picasso and the Age of Iron (Guggenheim Museum, 1993), Picasso cla'sico (Palacio Espiscopal, Ma'laga, 1992), Picasso: Primera mirada (Palacio Episcopal, 1994), and El Picasso de los Picasso (Museo Picasso Ma'laga, 2003-04), as well as exhibitions on other outstanding twentieth-century Spanish artists. Francisco Calvo Serraller’s teaching and research has led to the publication of important books on the history of both classical and modern Spanish art. He is the former Director of the Museo del Prado and has organized various exhibitions on related themes, some of the most noteworthy being Naturalezas espanolas (Museo Nacional Centro de Arte Reina Sofi'a, Madrid, 1988), El bodego'n espanol de Zurbara'n a Picasso (Museo de Bellas Artes, Bilbao, 1999), Flores espanolas del siglo de oro (Museo Nacional del Prado, 2002) and Goya. La imagen de la mujer (Museo Nacional del Prado, 2002).

Publication
A fully illustrated catalogue, published by the Solomon R. Guggenheim Museum and SEACEX, accompanies the exhibition. The catalogue features an introduction written by the two curators that discusses the exhibition’s concept and organization, a general essay by Calvo Serraller presenting a contextualized history of Spanish painting, as well as individual essays on each of the exhibition themes, also by Calvo Serraller. This catalogue will include full-color reproductions and a complete historical entry for each painting in the show.

This exhibition is organized by the Solomon R. Guggenheim Foundation and the State Corporation for Spanish Cultural Action Abroad (SEACEX).

Support provided by an indemnity from the Federal Council on the Arts and Humanities.