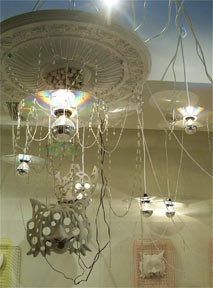 The installation will incorporate sounds, lights, and mixed-media objects d'art. This creates a materialistic view of wedding rituals among an illogical ceremonial format, paralleling a wedding chapel and banquet. The work is constructed with craft and anti-craft materials: ceramics, beads + metals, and ready made/commercially made (mostly plastic) objects such as laserdiscs, headphones, dish racks, baskets, plungers and garden fences, displaying a peculiar, childish, and playful scene that deconstructs these objects' functional essence.

Tetsuji Aono’s goal is to present a visual and aural satire that examines and shares a strong "funny" feeling toward weddings: people get so serious about "it" and spend a lot of money and plan and talk, talk, talk, about "it" and in the end the artist sees little if any value in "it," except to create a panic about gifts, money, and invitations.