Luigi Negro, Emilio Fantin, Giancarlo Norese and Cesare Pietroiusti will perform action (involving performances, video, mixed media installation and text) conceived around the story of an old coffee house located in San Cesario, a small town next to Lecce: a place where aesthetic contradictions meet the meanings (or maybe the lack of any meaning) of our time. 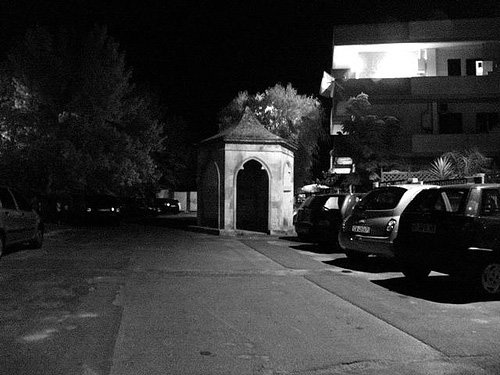 The four Italian artists will perform action (involving performances, video, mixed media installation and text) conceived around the story of an old coffee house located in San Cesario, a small town next to Lecce, Southern Italy: a place where aesthetic contradictions meet the meanings (or maybe the lack of any meaning) of our time.

Lu Cafausu is a metaphor for something that is, at the same time, both central and marginal.

Luigi Negro will be the curator of the show and the responsible of the attempt to actually move the ''cafausu'' from San Cesario to New York; therefore he will do a press conference together with the mayor of San Cesario.

Emilio Fantin will iron a bunch of dirty clothings. As soon as the ironing proceeds, he will fold the clothings and put them partly on hangers (attached on the wall, with nails) and partly on a little carpet on the floor; the folded clothings will have then a label (that will also have a price for the piece).

Giancarlo Norese will make and serve coffee standing behind a monitor where he will project a video.

Cesare Pietroiusti will do a free distribution of 500 drawings made with coffee spots.

Emilio Fantin. Lives in Bologna, Italy. In his individual work he is dealing with the concept of the dematerialization of art, and within collaborative projects he focuses on the concept of organism (Oreste, la casa di Nora, Osservatorio Polimi). His work has been exhibited in solo shows in such venues as the Galleria d'Arte Moderna in Bologna and Le Magasin in Grenoble. He has a very passion for tattered clothes.

Luigi Negro. Artist, sociologist and historian of the economics, lives in Lecce, Italy. The curating process for Negro is a tool for managing complexity and chance. The artist should ''build the world'', creating devices for relation and sense, making ''encarte'', conceiving dynamic maps with nexuses, emotions, actions, and rules. Curating as a form of art. He has been exhibiting in both collaborative projects (Oreste, Synapser, Undo.Net) and solo shows.

Giancarlo Norese. Lives in Milano, Italy. His work seems to originate from a contingency, a simple observation or from a banal ascertainment: the real loss of any certainty and the acceptance of dependence as a life condition. In his mute and image-less (but subtitled) videos constantly imposes on us his lucubrations, his personal ups and downs, his life seen as an art work. He slept for six months under a table.

Cesare Pietroiusti. Lives in Rome, Italy. With rigorous and analytical spirit, Pietroiusti transforms life experience in art, exploring small events, paradoxical situations or problems hidden in the turns of an ordinary existence. Pietroiusti, extremely thoughtful towards the collective dimension and interested in the relational and “public" aspects of art, was one of the founders of the Jartrakor Study Centre in Rome and of the Journal “Rivista di Psicologia dell’Arte"; in 1997 he was one of the initiators of the Progetto Oreste.