Collision of Memory. The works record, store and reveal up to 8 years of video memories culled from a specific environment. Plasma screens form a canvas displaying overlapping slices of video/time captured by high definition cameras. In these painterly compositions, portraits of people and landscapes taken at different times continuously wash over each other. 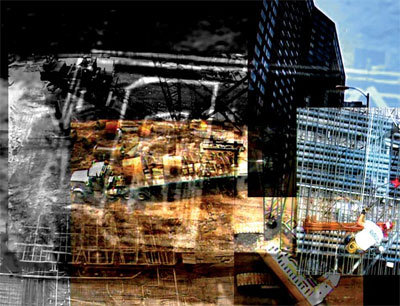 Schatz is documenting the present, showing snippets from the past and continuously turning both into video compositions. It's art in constant flux.--The San Diego Union-Tribune

Remarkable in vision and composition, Lincoln Schatz's Collision of Memory work records, stores and reveals up to 8 years of video memories culled from a specific environment. Plasma screens form a canvas displaying overlapping slices of video/time captured by high definition cameras. In these painterly compositions, portraits of people and landscapes taken at different times continuously wash over each other. Acting as an observer and a chronicler of events, Schatz's new form of video art visualizes the "memory" of an environment, creating a non-linear, ever changing impression of history and inviting viewers to consider relationships between past and present in new ways. "It's both entertaining and disorienting to spend some time in front of a piece by Schatz," Robert L. Pincus writes in The San Diego Union-Tribune. "The instant portrait of you exists in a virtual universe in which time has become elastic."

The centerpiece of the exhibition is Schatz's interactive Collision of Memory video work created for Dallas' One Arts Plaza. Designed by architect Lionel Morrison, One Arts Plaza will open in the heart of Dallas's Arts District on March 29, 2007. With two 9 × 9 foot video walls (six 61" screens each) flanking each side of the entrance to the elevator lobby, Schatz's installation will be one of the largest interactive new media pieces to be permanently displayed in a public space. From the moment the building opens, two cameras (one for each screen) will begin recording and storing memories from the lobby environment on a daily basis, and will do so for a minimum of 8 years. On-screen images from the massive digital library will be selected according to specific chance operations and displayed in four overlapping layers: one from the last two minutes and three from the more distant past. For the bitforms gallery showing, one 9 × 9 foot video wall will be exhibited, recording, storing, and displaying data exactly as in the lobby of One Arts Plaza.

Schatz's Collision of Memory work is also permanently installed in the lobby of the Helmut Jahn-designed high-rise at 600 Fairbanks in Chicago. In this ambitious, multi-perspective project, Schatz follows the development of the building from its incursion into the ground to its emergence onto the Chicago skyscape. The work will display approximately 20 months of video layers collected from four cameras mounted at various points on the tower crane and on the adjacent building, with additional handheld footage weekly captured onsite by Schatz. The on-screen images will be pulled from this memory database, continuously recombined and manipulated with results that will never repeat. As the building grows, so does the database, allowing for increasingly unique and dynamic combinations of footage to emerge.