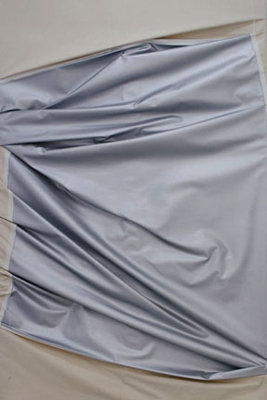 The inspiration for this exhibition is Theatre Project for a Rock Band, the 1995 Vito Acconci / The Mekons performance at the Dia Center for the Arts, New York. Acconci designed the performance space, which was hexagonally divided into 6 parts, each pie containing both the members of the audience and a single band member. That performance was structured architecturally and temporally around the idea of The Mekons, a radical punk band, playing an hour-long song first individually, then in various combinations and ultimately together, with Vito Acconci's narrative voice filling in the intervals between the music.

Using the structure and ideas of the Dia performance as inspiration, The loss of history makes them constantly curious and continuously horny...., will investigate the relationships between a group of artists whose radical approach to their medium -- be it through concepts, paint handling within the traditions of abstraction, or unconventional use of sound, architecture and photography has been overlooked in the United States, but found wide support in various cultural institutions in Europe, where over the years this group has shown together in numerous group shows. For this show Acconci will again provide the voice for the exhibition with an audio piece replaying the 1995 "Theatre Project for a Rock Band" narrative, which is once again broken up into six parts. During the silent breaks, the works of John M. Armleder, Olivier Mosset, Chuck Nanney, Steven Parrino and Sam Samore will metaphorically act as stand-ins for musical element of The Mekons.

Since the 1960s, Vito Acconci, has been a leading creative force in conceptual and body art and has consistently investigated the boundary between the body and public space through different media. John M Armleder, painter, sculptor, and at times critic and curator, has had numerous international exhibitions including the 1986 Venice Biennale. In 2006 he had a retrospective of his works on paper at the Institute of Cotemporary Art, Philadelphia, PA. His show Too Much is not Enough is currently on view at the Kunstverein Hannover, Germany. Olivier Mosset is one of the founding members of the Radical Painting Group. He has exhibited in museums and galleries in Europe and the United States since the 60s, first appearing in the 1964 Venice Biennale. His work is currently on view at two Paris institutions -- Palais de Tokyo and Fondation d'entreprise Ricard. For "Music is a Better Noise" currently on view at PS1, Chuck Nanney, created a site-specific sound piece for one the building's stairwells. He has had more than 60 solo and group shows including exhibitions at the Centre Georges Pompidou, Paris, and the New Museum of Contemporary Art, New York. Steven Parrino, an abstract artist with a punk-minimalist sensibility has had 37 one-person exhibitions since 1984. Steven Parrino's retrospective was organized at Musee d'Art Moderne et Contemporain, Geneva, Switzerland in 2006, the same year his work was included in the Whitney Biennial. A show of Parrino's work is planned at the Palais de Tokyo, Paris in 2007. Sam Samore, conceptual photographer, has exhibited internationally since 1990 at institutions such as the Kunsthalle Zurich, Switzerland, Fondation Cartier, Paris, and the 1995 Venice Biennale. His show Suicidist is currently on view at PS1, New York. He will have solo shows in 2007 at Galerie Gisela Capitan, Cologne, Germany and in May at D'Amelio Terras, New York.

“In the early eighties I began making small paintings using gouache on paper. They were of such things as sailboats in a bay, a blimp, country roads at night, interstates, moonlight on the beach, and so on; they were painted from life or memory; and they were fairly amateurish. By the late 80s, I was still painting on this modest scale but desired a higher level of detail and realism and I found that painting from my snap shots helped me achieve that. For the still lifes, I’d make small arrangements of objects in the studio and photograph them. (By the mid-nineties, I stopped painting from studio set-ups and simply painted from snap shots.) My painting skills improved somewhat and I began exhibiting my small paintings along with my more “sophisticated” work, sometimes in the same space.

Invariably there are either direct connections in the subject matter, or more abstract thematic or emotional connections between these different bodies of work. Painting the gouaches often affords me a kind of meditative time and space to develop the other works. So while I don’t consider my gouaches secondary works, or drawings, they do function as drawings to the extent that they help map and develop the more elaborate pieces, and they usually precede the works to which they are most closely related.

For the last decade, the works on paper occupy about half my studio time and the other half is dedicated to sculpture. As I haven’t painted still lifes for a while, it’s fun for me to reconsider them”. — Dike Blair, December 2006

This selection of delicately rendered gouache-and-pencil paintings, made between 1988 and 1997, demonstrates Dike Blair’s interest in how graphic and industrial design have permeated both his personal and our shared environment and aesthetic. Dike Blair has exhibited internationally since 1974 and was included in 2004 Biennial Exhibition, Whitney Museum of American Art, New York. He is represented by Feature Inc., New York, NY.