Wind from the East

The exhibition presents contemporary artists, whose works intertwine old and new, the East and the West, myths and reality, and change and permanence into a multilayered dialogue of opposites. Heri Dono, Eko Nugroho, Melati Suryodarmo and Entang Wiharso from Indonesia, Chen Zhen, Hu Yang and Yang Zhenzhong and Araya Rasdjarmrearnsook. 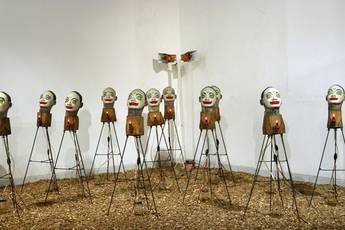 Included are artists from three very different countries: Indonesia, China and Thailand. Their cultural heritage is different. Thailand is a predominantly Buddhist country, while in Indonesia different religions from animism to Islam, from Christianity to Buddhism and Hinduism, live side by side. In China, Taoism, Confucianism and Buddhism have endured despite the long-lasting Communist regime. The shared language of contemporary art and global interaction bring the exhibition's artworks close to the Finnish art audience despite differences in culture and social structures.

The exhibition presents contemporary artists, whose works intertwine old and new, the East and the West, myths and reality, and change and permanence into a multilayered dialogue of opposites. The participating artists are, Heri Dono, Eko Nugroho, Melati Suryodarmo and Entang Wiharso from Indonesia, Chen Zhen, Hu Yang and Yang Zhenzhong from China and Araya Rasdjarmrearnsook from Thailand.

Heri Dono (b. 1960) is one of the best-known Indonesian contemporary artists. His art draws on Indonesian heritage, magical realism and criticism of the political situation. Eko Nugroho (b. 1977) is a member of the younger, politically aware and fast-moving artist generation of Yogyakarta. His humoristic and surreal imagery, adorned by ironic slogans, is created using the techniques of comic strips, painting, animation and tapestry.

Melati Suryodarmo (b. 1969), a performance artist, moved to Germany in 1994 to study under Marina Abramovic. Her intensive, strongly physical and sensual performances balance between laughter and seriousness, the everyday and the absurd. Entang Wiharso (b. 1967) divides his time between the United States and Indonesia. His paintings and installations combine personal, Western and Indonesian mythologies and cast a critical eye on international politics, environmental issues and cultural stereotypes and prejudices.

Chen Zhen (1955-2000), who emigrated to Paris in 1986, was one of the most renowned contemporary Chinese artists of his generation. His experiences of living between two worlds are crystallised in his poetic installations, which bond together Western and Chinese motifs, a childhood informed by the Cultural Revolution and Buddhist philosophy. Hu Yang (b. 1959) depicts the continuous change and huge social differences that exist in his native Shanghai in his photographic series Shanghai Living. The one hundred photographs take a peek into the living quarters, dreams and reality of illegal immigrants, the overworked middle class and the self-indulgent upper class.

Yang Zhenzhong (b. 1968) also takes the constantly changing Shanghai as his subject matter. His witty and humorous video works and installations open up new perspectives on the contradictions in Chinese society, consumerism and its flip side, mortality, and the required conditions for a happy family. Araya Rasdjarmrearnsook (b. 1957) is currently one of the most famed and controversial Thai artists. She is famous for her video works that bring death close to us as she reads to the dead or dresses them in a tranquil and respectful atmosphere.