Thorsten Brinkmann's photographic self-portraits turn a classic genre upside down. His work is initiated by the things he finds: objects discarded by the civilisation. Romeo Grunfelder [desi're:], an old celluloid film is labeled as being from the estate of Jack Goldstein; the unusual S8 footage is nevertheless difficult to interpret. 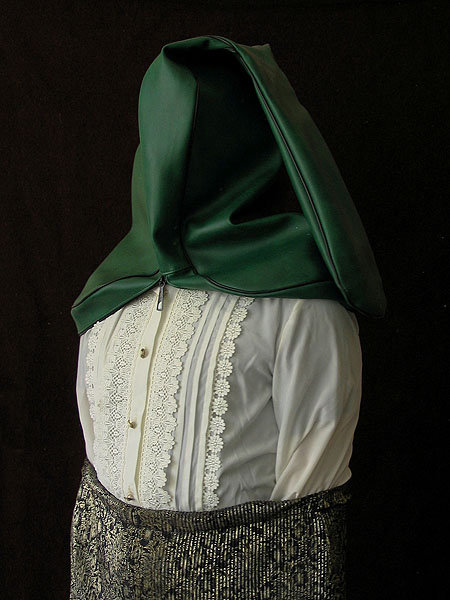 Thorsten Brinkmann's photographic self-portraits turn a classic genre upside down. In general, the work of artist Thorsten Brinkmann is initiated by the things he finds: objects discarded by the civilisation, which he finds in bulk waste collections in the street, but also ordinary things like bottles, flower pots or shelves. Even his own body becomes an objet trouvè by the artist. Brinkmann is a juggler who uses different worldly objects on an equal level, introducing them into art in the manner of Duchamps.

In his latest work the artist is standing – surrounded by seemingly trivial objects, which all, however, point to the artistic context by the way they are presented – in the centre of a series of photographic self-portraits. The creator in the focus of his own eye is a topic which asserted itself as a distinct form of art in the Renaissance when artists developed the necessary self-assurance to depart from their status as nameless craftsmen. Many are the self-portraits which have been created since – Dürer's self-portrait showing him in a fur coat, from 1500, and Velazquez' legendary presentation of himself in Las Meninas of 1656 are particularly fine examples of this phenomenon. These are pictures which have been carved into our collective memory and which to this day have shaped the cultural acceptance of the artist and his creative power in our society.

Brinkman pulls pieces of clothing he has found over his head, presses the delay-timer of his camera, runs toward a wall he has equally found, places a lamp shade, a pot or the cover of a tennis racket over his head and finds his pose. The results are strikingly picturesque and unconventional at the same time: dimmed colours with soft contours, a detail evoking the classical three-quarters portrait, a love for unusual combinations reminiscent of Magritte. The way we view art, trained by studying classical portraits, has to be completely reassessed: the visual object is covered, hidden, and slightly deviates from the context we are used to; the artist draws us into a picture-puzzle between photography and painting.

Brinkmann's work so far has centred on the close relation between objects and people, always trying to evoke elements of painting in his sculptures or photos. His artistic training with prof. Bernhard. J. Blume and prof. Franz E. Walter has introduced him to intellectual realms which are free of associations. With his latest photo series Brinkmann expands his creative work by including the quality of painting and combining it with the achievements of art in the 20th century. He seamlessly moves between objet trouvé, collage, photography, sculpture and painting. If we recall his actions which immediately precede the photos from the series “Portraits of a Serailsammler” (Finding, building, dressing, pulling something over his head, posing), the importance of the performance part is equally an important characteristic of his work.

Brinkmann was shortlisted for the Schering award and his work can currently be viewed in the shortlist exhibition at the Berlinische Galerie. Large national and international collections have already bought some of his works.

An old celluloid film is labeled as being from the estate of Jack Goldstein. The unusual S8 footage is nevertheless difficult to interpret. Due to partially missing data, place, time and author cannot be determined and keep the beholder in the dark. The ongoing investigation has not been able to produce a reasonable explanation of the circumstances.

The following film is presumably part of the estate of the american artist and film producer Jack Goldstein; who committed suicide March 14, 2003 at his trailer home in San Bernardino, California.

Due to several facts, the legal administrator of Goldsteins estate, the cologne gallery owners Buchholz & Müller can not rule out, that even if Jack Goldstein himself isn't the author, there are strange similarities between this film and his work, specificly his cinematic and performative concepts. Goldstein himself supposedly passed on this film during his lifetime.

The official opening of the exhibition is on March 23rd, 7pm.