This exhibition is a failure, first as a supposed attempt to present Portraiture in its contemporary diversity. Indeed, many artists are tempted to reappropriate this "genre" and approach it from a wide range of visual styles: archiving, serial compilation undertaken as documentary-style observation or "objective" approach. 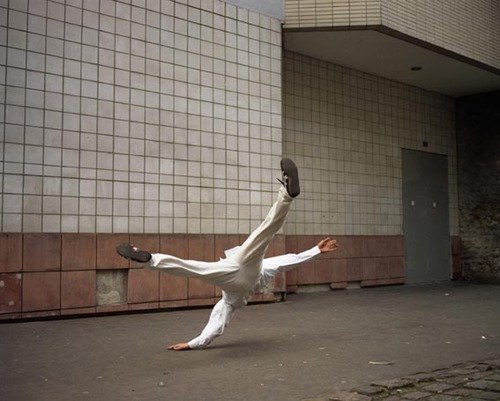 This exhibition is a failure, first as a supposed attempt to present Portraiture in its contemporary diversity. Indeed, many artists are tempted to reappropriate this “genre” and approach it from a wide range of visual styles: archiving, serial compilation undertaken as documentary-style observation (Fréger, Bazin) or a photographic approach that could be described as “objective” (Graham, Streuli, Knorr) but it can also translate into the reconstruction of images or mises en scènes aiming to reproduce archetype (s) by evocation (Fullerton-Batten, Knorr, Bourouissa, Sank, Darzacq, Lafontaine).

And finally, after extensive research and accumulation of works based on this practice that could be seen as formalized, even formatted on one hand and “neo…” or out of date on the other, we realize the extensive variety of contemporary possibilities and the impossibility of visual uniformity that we could have initially expected. This project has thus become a presentation of diverse practices, photographic as well as film, because it has become necessary to expand the subject to include moving image: recording a slice of life (Streuli, Darzacq, Mul) or cinematographic (Boon). This exhibition no longer seeks to present a formalized genre but rather to demonstrate its fragmentation.

We could quickly go over the importance of this very old genre whose contemporary reactivation can be seen in terms of historical continuity, first that of a pictorial tradition – court portraits which gave rise to the 19th century taste for bourgeois portraits – followed later by the appearance of the medium of photography for popular and social portraits of families or groups – such as class or cooperative photos. Finally, in its modern phase, the “Sandersstyle” serial portrait appears, in which the individual becomes the representative of a social group. This is still of major importance in the renewal of contemporary practice.

For the sake of coherence in the exhibition, we decided to focus on a generational phenomenon: portraits of teenagers from different socio-economic groups reflecting the past twenty years. This is a preoccupation shared by many artists. Some of the most representative undertakings are presented here.

Yet here again, we will perceive certain impossibilities including the major difficulty of freezing faces mid-development. And while all the artists approach the intimate fragility of adolescence in their own way, none could possibly establish a generic portrait. De facto, a teenage face eludes. Its physical incompleteness dooms to failure the identity portrait and immediately brings us back to the uncertain evolution of the individual. By definition, it can only be a temporary portrait. These portraits are even more transitory because they escape any real class categorization. Visual accumulation reveals that teenagers’ often-mimetic attitude does not come so much from a real group as from the desire to become, the idea of a future whose framework ultimately remains vague.

As a result, the subject is a delicate or even thorny one because it crosses all social classes and sparks identity issues that combine context and emerging personality born as much of a whimsical desire to identify with something as of a reinterpreted, caricatured reality to create a sense of belonging.

These generational groups ultimately hold together more by an imagined link than by the weft of real social fabric and their often hard-line yet blurry-edged attitudes echo the identity crisis of adult society. A sort of stacking up of desires in which the individual sees himself in the fragility of each face but in which the archetype of the group only functions by attribute. Christine Ollier