Retrospective 1981 - 1990: for close to three decades, the work of Steven Parrino has represented a vital link to the supposedly obsolete idea of radicality. Back in the early 80, when the word on the street pronounced painting dead, he took a shot at necrophilia. "Before (plus ou moins)" brings together some key pieces in the formation of Parrino's aesthetic universe. "Bastard Creature" is an exhibition of artists who Parrino supported and influenced that is based on two previous exhibitions that the artist curated himself. 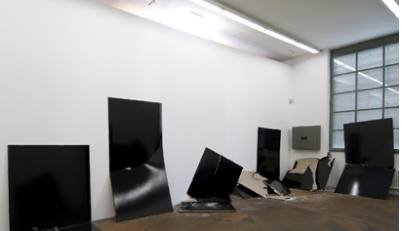 For close to three decades, the work of Steven Parrino has represented a vital link to the supposedly obsolete idea of radicality. Back in the early eighties, when the word on the street pronounced painting dead, rather than join the flock of mourners, Parrino took a shot at necrophilia. In his hands, appropriationist strategies became a kind of black ops technique, a means to convulsively incarnate the historical breakdown of avant-garde narratives. Not to provide a critically laden image of ideological collapse at a distance, but to produce a raw, visual materialization of its effects.

Neither nostalgic nor cynical, his "misshapen" and gutted monochrome paintings, performance-based films, photo-collages and works on paper made with such loaded materials as engine enamel, blood and glitter, owe more to Stella’s Black Paintings’ "what you see is what you see" credo than to any post-pop tradition of cultural intervention. And just not any of Frank Stella’s Black Paintings, but specifically: Arbeit macht frei (1958) and Die Fahne Hoch (1959). As far as Parrino was concerned, these works were not called "black" for nothing.

To Stella’a black one must also add the silver of Warhol’s disaster paintings (1963). Just as in his "figurative" drawings using motifs appropriated from biker, no-wave, punk rock, and comic book culture, Parrino’s "misshapen" canvasses – monochrome paintings wrenched from their stretchers before being stretched back, distorted, in a supremely frozen gesture–, suggest, in Robert Nickas’ words, "the crumpled body of a car after an accident (...) a clear sign of violence being served cold." The retrospective at the Palais de Tokyo gathers about one hundred works shown in three distinct spaces.

First, a selection of early painting and works on paper brings to the fore Parrino’s fascination with the "dumb" and glamorous surface of America’s counterculture. The central part of the retrospective takes its cue from the large painting exhibitions that Parrino staged throughout his career. It includes many of the artist’s most emblematic works, such as Slow Rot (1988) a painting doused in motor oil and Stockade (1989) an abstract shaped canvas that mimics the structure of the eponymous public torture instrument. Finally, a selection of recent works highlights Parrino’s dialogue with the figure of Smithson, and includes models for yet unrealized large-scale sci-fi inspired earthworks such as Study for a model of the Universe to be placed in the Forbidden Zone (2003).

Parrino writes, "Radicality comes from context and not necessarily form. The forms are radical in memory, by way of continuing the once radical, through extensions of its history. The avant-garde leaves a wake and, through mannerist force, continues forward. Even on the run, we sometime look over our shoulders, approaching art with intuition rather than strategy. Art of this kind is more cult than culture". Fabrice Stroun, associate curator, Mamco, Geneva and guest curator.

"One passes through the last fifty years of American culture in the work of Steven Parrino, from the hipsters, hot rods, grotesque queens and bikers of the 1940s/50s to the hippies, Harleys, porn stars and punks of the 60s/70s, to their re-emergence today." (Robert Nickas)
Borrowing from all forms of American culture (bikers, super heroes, punk music, horror films, etc.), the art of Steven Parrino retains a strong link with the history of modern art, in particular the post-war American avant-garde. The sources of Parrino’s œuvre – its expressive strength, its constantly unfolding drama, its chromatic radicalism, the extreme violence of its destructive power – appear in the works of artists such as Andy Warhol, Vito Acconci, Robert Smithson and many others. His fetishized colours, black and silver, are the colours of Harley Davidsons, guitar amplifiers, sunglasses (which Parrino used to wear even at night), but also those of Frank Stella’s paintings or of the steel or industrial paint used by Donald Judd.

Steven Parrino’s approach in his search for a realist painting, conceived as a real object or fact, can be interpreted as a new form of "realism", in the tradition of post-war American artists. "Realism has been redefined since Courbet, from representing the reality of the day to defining the object in the real world, real time. Subjectivity is selection (the clean edit) and does not deal with the melodramas of fantasy, just the facts," Parrino used to say. The artist chose to draw his inspiration from his predecessors in order to give painting a new direction at the most critical moment, when everyone was proclaiming its death.

Before (plus ou moins) brings together some key pieces in the formation of Steven Parrino’s aesthetic universe. Composed of historical works from the 1960s and 1970s – like Andy Warhol’s Electric Chair series, a monochrome stainless steel piece from Donald Judd’s Progression series (made among other things with Harley Davidson’s lacquered paint), the video Claim Excerpts by Vito Acconci, or the videos Rundown and Swamp by Robert Smithson, but also Sturtevant’s Stella Black Paintings or Kenneth Anger’s film Invocation of My Demon Brother – Before (plus ou moins) maps out a landscape of multiple, intertwined influences that highlights Parrino’s fascination with the monochrome, his regular use of reappropriation and his conception of the work of art as a surface for projection and free association.

Steven Parrino broke many boundaries. While he brought together different disciplines and media, he also reached towards other artists. Parrino recognized the importance of the next generation and tirelessly supported the work of artists he believed in by collaborating with them, trading with them, writing about them, or inviting them to participate in exhibitions he curated himself. Bastard Creature gathers together this community of artists and presents works by those who continue to be inspired by Parrino and his spirit.

The starting points for Bastard Creature are two exhibitions curated by Steven Parrino himself: Bastard Kids of Drella, part 9 (Le Consortium, Dijon, 1999) and The Return of the Creature (Künstlerhaus Palais Thurn und Taxis, Bregenz, 2003). Echoing the artist’s own openness, the Palais de Tokyo has invited the directors of both institutions to join the Palais de Tokyo’s curatorial team in the preparation of Bastard Creature.

Bracketing the exhibition is the iconic aura of Andy Warhol and the reckless glamour of Michael Lavine. Contained within Warhol's photographic self-portrait and Lavine's photograph of a kneeling Courtney Love are ritual, violence, sex, pop culture, outlaw, celebrity, high art, and the creation of new ideals out of the ruins of a rotten culture. Trash collides with aesthetics, and each are revealed as necessary equals to the other.

This collapsing of opposites – beautiful/ugly, transparent/opaque, black/colourful – informs the work of Jutta Koether, a frequent collaborator with Parrino and his music project Electrophilia. In this exhibition, she presents a black painting and mixed media assemblage with glass chimes. Also a collaborator, Amy Granat creates 16mm films and installations that investigate the pure and basic qualities of light and sound. She made her Chemical Scratch Films (2003) by chemically altering the film strip material itself. Choosing to show recent work, Amy O’Neill presents the newest addition to her "Parade Float Graveyard" series, a sculptural installation of a wagon wheel rising out of a spinning platform. Mai-Thu Perret pursues her own storyline of undermined heroism by pairing desire with emptiness, and her sculptures give us slick monolithic surfaces in gold or black.

More direct references to pop culture and to its fallen heroes exist in works by Chuck Nanney, Blair Thurman, Banks Violette, and Richard Kern. Nanney’s painting folds pop into minimalism, Thurman’s neon references race cars, and Violette’s sculpture proposes a face-off between two black platforms and a collision of fluorescent lights, as if a musical moment reached beyond its breaking point. Traces of extreme acts reappear more explicitly in the film by Richard Kern, who captures the infamous underground culture of New York's Lower East Side.

The graphic qualities of an image stripped to its bare essence that appear in the work of Steven Parrino are also important to the work of Gardar Eide Einarsson, who covers a wall with a duplicated image of a chain-linked fence by using spray-paint and a stencil. At a smaller scale, Richard Aldrich strips painting to its minimal graphic potential. The curved patterns and lines in Elizabeth Valdez’s drawing were made for her Black Noise book, from an upcoming series of comic books created in Parrino’s memory produced by the artists John Armleder, Mai-Thu Perret, and Amy Granat. The photocopied pages by Cinema Zero, a nomadic collective that presents film/music/performance events, are cut-up collages that also serve as the event announcements. The collaborative video FTW (for S.P) was made in early 2005.