7 artists in a brechtian tableau vivant. These artists fuse symbolic language with their subject to stake out an inquisitive visual poetic. In their works their compositions blending with a sociopolitical stance to create resonant sonorities. Curated by Lee Plested. 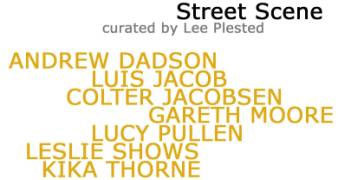 7 artists in a brechtian tableau vivant

... they do not use music merely to intensify the dynamic growth of the action and the rhythm of the performance, but as a substance...
-Kurt Weill

Street Scene stages the works of seven artists in a brechtian tableau vivant. The exhibition borrows its title from the Kurt Weill opera, his first American attempt at fusing serious music with vernacular themes. Weill believed that the substance of his art was made from the complete synthesis of music and text.

Similarly, the seven artists in Street Scene make forms that merge high art traditions with the experiences of the everyday. Reflecting Weill's theory that substantive expressivity comes from a full merging of art and message, these artists fuse symbolic language with their subject to stake out an inquisitive visual poetic. In their works, they all turn to materials at hand, their compositions blending with a sociopolitical stance to create resonant sonorities.

Evolving his philosophy studies through his art practice, Luis Jacob finds, collects, and arranges images to form visual essays that reflect on cultural theory. In Album II Jacob has compiled a 90-panel photo archive of images depicting social interactivity. Each of Jacob's Album projects is each disrupted by a discrete object, in this case a neon diamond. Based in Toronto, Canada, Luis Jacob has recently had exhibitions at the Art Gallery of Ontario, the 2007 Montreal Biennial and he will participate this summer in documenta XII.

Within the work of Andrew Dadson is a latent deviance that manifests itself in common acts of rebellion. Following graffiti and skateboard culture, his actions, such as Black Painted Fence, constitute an aggressive reversal of value; the suburban landscape is extinguished simply by being painted over - as if it were graffiti. Andrew Dadson lives and works in Vancouver, BC and has exhibited at the Belkin Satellite, Vancouver, Saidye Bronfman Centre for the Arts, Montreal and the Power Plant, Toronto. He will have a solo exhibition at Galleria Franco Noero Gallery, Turin this June.

Lucy Pullen's ongoing use of reflective material is an experiment in the production and control of anarchic energy, in reflectivity and surprise. For Street Scene, Pullen will exhibit recent works from this series. Wrapping her reflective cloaks around a set of vintage amplifiers, she activates a playful phenomenological relationship between viewer and viewed in the moment when the surface catches light and bursts forth in a sudden brilliance. Lucy Pullen has exhibited extensively including at Yerba Buena Center for the Arts, San Francisco, Art in General, New York, Art Metropole, Toronto and the Contemporary Art Gallery, Vancouver.

Kika Thorne is a deeply committed activist and scholar. Since establishing herself as a filmmaker, Thorne has evolved her ideas into discrete objects that continue to address the exploitative and often indiscernible consequences of globalization. Compelled by our current environmental crisis, Thorne has enmeshed herself in abstract mathematics and the physical laws of the universe. She gestures toward Tatlin and the optimism of Constructivism in creating a model of the harmonic balance in our solar system. Currently residing in Vancouver, Kika Thorne has shown across Canada in collaborative and solo appearances including at the Power Plant, Toronto and the Contemporary Art Gallery, Vancouver.

Colter Jacobsen travels the cities' sidewalks collecting discarded and lost photographs, printed matter and found writing. His highly romantic method yields archives, collages and drawings. Jacobsen is occupied with pairing: finding an image's twin, rendering an abandoned photo in pencil, then covering it and creating its pair from memory, etc.. San Francisco based, Colter Jacobsen has shown recently in New York at White Columns and currently has a solo exhibition at Jack Hanley Gallery, San Francisco.

Gareth Moore will arrive in New York on a cargo ship from Bremerhaven. He will move into the gallery and create a site-specific installation, as part of his yearlong project titled Uncertain Pilgrimage, a journey during which he will realize a series of interactions and collaborations with people, places and objects with which he would ordinarily have little relation. Gareth Moore has recently exhibited at Witte de With, Rotterdam and the 2007 Miami Basel Performance series curated by Jens Hoffman.

In intimate collages composed of torn book pages, Leslie Shows envisions landscapes littered with the detritus of history. These entropic geographies are piled with the torn pages of text, an accumulation of signs, a ground of language from which figures emerge. Leslie Shows has recently exhibited in the Orange County Biennial and in the SFMOMA 2006 SECA Award exhibition.

Canadian curator Lee Plested received his MA in Curatorial Practice at CCA, San Francisco. His exhibition Thrown: Influences and Intentions of West Coast Ceramics, co-curated with Scott Watson for the Morris and Helen Belkin Gallery, Vancouver was cited in Artforum as one of the top ten exhibitions of 2004. Currently residing in San Francisco, Plested has organized numerous exhibitions in the Bay Area, including a remake of John Baldessari's seminal work I will not make any more boring art at CCA and projects for Jack Hanley Gallery and 871 Fine Arts. Upcoming projects include B Wurtz: Photo/Objects for 871 Fine Arts and CCA:100 Years in the Making for the Oakland Museum of California this fall.