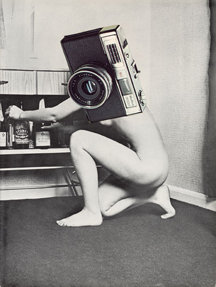 P.S.1 Contemporary Art Center presents the first U.S. solo exhibition of works by British artist Linder, an active figure in the punk and post punk music scenes. Known for her collaged work—which includes the cover design of the Buzzcocks's 1977 single Orgasm Addict—Linder has been creating photomontages for the past thirty years that combine imagery from pornography, car enthusiast publications, and other magazines associated with male interests and the objectification of women. This exhibition is on view in the Mini-Kunsthalle from May 19 through September 24, 2007.

Linder features recent and older works, including the "Star" series (2007), in which the artist imposes giant roses and other lush flowers on naked female torsos, and the "Pretty Girl" series (1997), a suite of images in which the heads of black-and-white pinups are replaced by home appliances. Also on view are drawings and photomontages made in the late 1970s, concert flyers she designed for music labels like Factory Records, and other printed ephemera. A video of Linder's 1982 performance with her band Ludus captures the raw and frantic energy that surrounds her work.

By juxtaposing and overlaying nude figures with oversized flowers, cakes, cameras, and sewing machines, Linder creates striking and graphic compositions. She employs objects generally associated with domesticity to highlight and challenge notions of power, femininity, and consumer culture. Bodies and faces are reconfigured and mechanized with ironic flair in order to dismantle the utopian, technology-driven visions of modernity.

Linder (b. 1954, Liverpool, United Kingdom), whose full name is Linder Sterling, has had numerous solo exhibitions of her work, including The Lives of Women Dreaming at the British Council, Prague (2004); and The Return of Linderland at Cornerhouse, Manchester (2000). Her work has been featured in group shows at the Museum of Contemporary Art, Chicago; Kunstverein Munich; and, most recently, in the exhibition The Secret Public at the Institute of Contemporary Arts, London. She has performed at the 2006 Tate Triennial and at the Barbican, both in London; and at Le Magasin, Grenoble. Linder will have an exhibition at Stuart Shave/Modern Art in fall 2007. She lives and works in Heysham, United Kingdom.