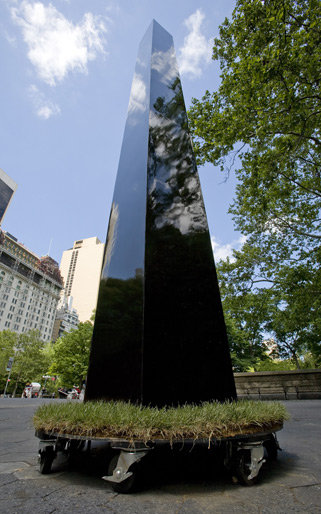 A 20-foot-tall, narrow, tapering object with a pyramidal top, Damián Ortega's Obelisco Transportable stands on a grassy platform on wheels, as though it has been uprooted from a previous location and made portable. Since ancient times, when the form first emerged in Egypt, obelisks have served as visible centerpieces of cities. Ortega characterizes Obelisco Transportable as "a mobile landmark" that one could potentially move anywhere to commemorate anything. It offers a pragmatic yet wryly playful approach to a global society in which the balance of power is constantly in flux, and in which populations shift and drift from one place to another.

Obelisco Transportable is also a nod to the ways in which public sculptures and monuments have historically been moved from one city to another. Ortega describes this as the "Napoleonic gesture," in which the wartime victor plunders the monuments of captured cities and brings them back home to be installed in public there as a symbol of victory. Such transfers were meant to signal the rise of a new power and the demise of an older one, as well as an exchange of central and peripheral positions. Cleopatra's Needle in Central Park, for example, was originally created in Heliopolis, the ancient Egyptian city, more than 3,000 years ago. During the time of the Roman Empire, it was moved to Alexandria, where it remained for almost two millennia before being offered to the United States as a gift in the 19th century.

Ortega, who until just a few years ago was active as a political cartoonist in his native Mexico, creates sculptures, photographs, collages, and other works that tap into the poetic and symbolic resonance of everyday forms. Using wordplay, visual metaphors, and physical interventions, Ortega investigates the way in which objects serve as markers of cultural and political history. Among his best known works are the three pieces that make up "The Beetle Trilogy" - Cosmic Thing (2002), Moby Dick (2004-5), and Escarabajo (2005) - an epic series that revolves around the Volkswagen Bug as a ubiquitous icon of modernity.

Sponsorship
This exhibition is made possible through the cooperation of the City of New York, Michael R. Bloomberg, Mayor; Patricia E. Harris, First Deputy Mayor; and Department of Parks & Recreation, Adrian Benepe, Commissioner.

Special thanks to kurimanzutto, Mexico City.

Obelisco Transportable is on view at Doris C. Freedman Plaza, 60th Street and Fifth Avenue, at the entrance to Central Park.
Subways: N, R to Fifth Avenue; 4, 5, 6 to 59th St/Lexington Ave New York.
The work is free to the public and is on view daily.