"Prized Images: The Knight Purchase Award for Photographic Media 1991-2006": the award is given annually to a living artist working with photographic media. "Building the New Akron Art Museum" chronicles the progress of the Museum's new building from its conception through its construction. "Women at an Exhibition" is a collaborative work by composer Randall Woolf and filmmakers Mary Harron and John C. Walsh, and incorporates images of women from the museum's collection. 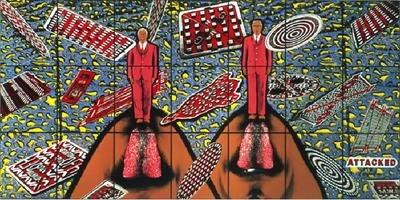 Prized Images features photographic works from the museum's collection acquired through the John S. and James L. Knight Foundation Purchase Award for Photographic Media. Established in 1990 by an endowment gift from the Foundation, the award is given annually to a living artist working with photographic media. Among the 107 works on view in Prized Images are photographs by Vito Acconci, Sophie Calle, Gilbert & George, Mary Ellen Mark, Thomas Struth, Hiroshi Sugimoto and Carrie Mae Weems. The Knight Purchase Award allows the museum to deepen and broaden its representation of the history of photography, a special focus of the museum's recent acquisitions. The works in Prized Images mirror the seismic changes in scale, technique and approach that have occurred in photography over the past two decades. Prized Images occupies three of the museum's new changing exhibition galleries.

The museum's daring yet functional design is the work of the award-winning Viennese architectural firm Coop Himmelb(l)au and is their first public building in the United States. This exhibition explores the genesis of the new museum beginning with the original conceptual sketch by principal architect, Wolf Prix.

Detailed architectural plans reveal the building's structure and major architectural features: the Roof Cloud, the Crystal (the lobby) and the Gallery Box. To communicate their vision of the finished structure, the architects prepared computer-aided renderings. These renderings reveal the building's major themes such as the contrast between transparency and seeming solidity and the apparent defiance of gravity — "the dream of every architect," according to Prix.

The complex design process took over two years. The intricate forms of the Crystal and Roof Cloud required architects and contractors to use new free-form 3-D modeling software for the steel and glass elements.

The three-year construction process was documented by Akron artist Andrew McAllister. His photographs show how this spectacular structure was assembled. After viewing the exhibition, explore the building, because to really understand the new Akron Art Museum, you must experience it.

Women at an Exhibition

Commissioned by the Akron Art Museum to celebrate its collection, Women at an Exhibition is a collaborative work by composer Randall Woolf and filmmakers Mary Harron and John C. Walsh. Woolf's music blends traditional symphonic orchestration with electronically sampled sounds of women singing in musical styles ranging from country and western, gospel, new wave rock, blues and renaissance madrigals. Commissioned to accompany Woolf's composition, Harron and Walsh's video incorporates images of women from the museum's collection, including works by Ruth Bernhard, Harry Callahan, William Merritt Chase, Chuck Close, Walker Evans, Helen Levitt, Alfred Stieglitz and others. Woolf's piece had its world premiere in 2004 in a live performance by the Akron Symphony Orchestra and a chamber version debuted at Carnegie Hall in 2005 by the American Composers Orchestra. This commission was funded by American Composers Forum's Continental Harmony, a national program that links composers with communities.

Women at an Exhibition was commissioned by the Akron Art Museum and premiered by the Akron Symphony Orchestra under the direction of Ya-Hui Wang with support from Continental Harmony, which links communities with composers through the creation of original musical works. The program is a partnership of American Composers Forum and The National Endowment for the Arts, with funds provided by the John S. and James L. Knight Foundation and the Rockefeller Foundation and additional support from the Target Foundation.