The artist presents works in clay and woven textiles, largely inspired by a 15-day journey through Azerbaijan. The elaborately crafted and richly decorated art, architecture, and literature of Azerbaijan are intertwined with images and symbols familiar to her native California. 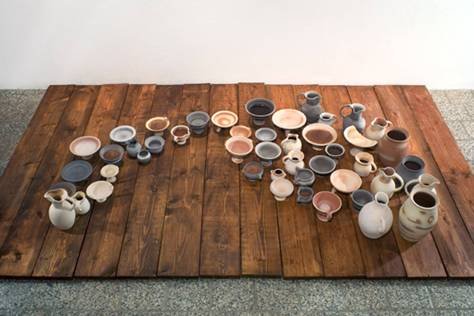 The confluence of Eastern and Western cultures are celebrated in the recent artwork of Karen Koblitz. In "Facing East," the elaborately crafted and richly decorated art, architecture, and literature of Azerbaijan are intertwined with images and symbols familiar to her native California. Koblitz will be presenting works in clay and woven textiles, largely inspired by a 15-day journey through Azerbaijan in May 2006, after receiving a Culture Connect Envoy Grant through the United States Department of State, sponsored by the U.S. Embassy in Baku.

Among the works in clay is an installation of 47 vessels arranged in the ancient Asian symbol of a buta (paisley pattern), referencing historic burial sites from the Sheki region. Pottery filled with food and drink accompanied the dead. Koblitz uses her vessels to trace a history of Azerbaijan and introduces oil and madder root into various containers. Oil is an abundant natural resource in Azerbaijan and has given this small country a great importance through the ages. Carpet weaving is another notable industry and madder root provided the natural dye for the deep red color. The color red also symbolizes the blood that was shed through the centuries as Azerbaijan fought with neighboring Persia, Russia and Armenia.

A series of ceramic wall pieces blend ornamental elements discovered in the opulently painted interiors of the 18th Century Khan's Summer Palace and the ornately carved limestone on the exterior of the Shirvan Shahs Palace. The center of each relief contains a concave vessel in which appear passages from the renowned Azerbaijani novel, "Ali and Nino" (1937), a love story by Kurban Said which takes place at the outbreak of the First World War and introduces the reader to the cosmopolitan and multi-ethnic city of Baku.

Koblitz collaborated with Abilova Qanira on a series of four hand-woven carpets. Koblitz met Qanira, a skilled weaver, during her sojourn in Baku. Watercolor designs were sent to Qanira and communication between artist and weaver was made via Internet through translator, Dr. Naile Suleymanova. Looking closely on two of the carpets one can discern a small bird in flight, a swallow, which Qanira has woven into the design as a symbol of hope that one day she will follow it to America.

Koblitz teamed-up with Iranian born graphic designer, Negar Nowzar, to include calligraphic designs on two of the carpets. On the carpet titled, "Leili's Secret," Nowzar designed a series of butterflies, shaped by calligraphic Farsi script, that flutter in a lush garden of calla lilies, morning glories, and blooming strawberries. These butterflies contain selected passages from the romantic Azeri-Turkish poem, "Leili and Medjnun." A Durfee Foundation Grant provided the funding for the creation of a fourth carpet, in which Nowzar produced a calligraphic tear bottle shape employing Azerbaijani script and a line from Khurshid-Banu Natavan's 19th Century poem, "To My Son Abbas." These bottles were created to hold tears of bereavement and Natavan's poem is a mournful ode to the loss of her son. Natavan's native city of Shusha is in Nagorno-Karabakh, a region recently mired in conflict between the countries of Armenia and Azerbaijan. Both countries mourn the loss of their native sons.

There will be a full color catalogue, which will accompany the exhibition, partly funded by a Lyons Faculty Research Grant from the Roski School of Fine Arts at the University of Southern California, where Koblitz is head of the Ceramics Area. The Consulate General of Azerbaijan has also given generous support to this exhibition.