The exhibition will feature Baroque masterpieces from the 17th and 18th centuries together with exceptional works of modern and contemporary art exploring the cultural diversity of Brazilian artistic expression. The juxtaposition of important works by indigenous, Afro-Brazilian, and European artists working in Brazil will underscore the complex network of traditions influencing Brazil's artistic development. 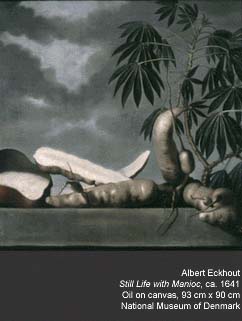 Brazil: Body and Soul, a major exhibition organized by the Solomon R. Guggenheim Museum, will explore several key periods of artistic production in Brazil. The exhibition will feature Baroque masterpieces from the 17th and 18th centuries together with exceptional works of modern and contemporary art exploring the cultural diversity of Brazilian artistic expression. The juxtaposition of important works by indigenous, Afro-Brazilian, and European artists working in Brazil will underscore the complex network of traditions influencing Brazil's artistic development.

As the title implies, the exhibition will emphasize the integration of the physical and spiritual experience in Brazilian art -the union of body and soul. It will examine the importance of performance, music, and ritual as well as the role of religious processions and secular celebrations in Brazilian art and culture.

The installation for Brazil: Body and Soul will be designed by noted French architect Jean Nouvel, who is creating a unique context in which to view the exhibition.

Brazil: Body and Soul will contain approximately 350 objects, ranging from a monumental Baroque altarpiece, liturgical pieces in gold and silver, historical and contemporary ritual objects, and religious painting and sculpture, to modern and contemporary paintings, installations, photographic works, and sculptures. The introductory section of the exhibition will be an examination of the "outsiders' view" of Brazil in the Age of Exploration. Included in this section will be major paintings by early 17th-century Dutch artists Frans Post and Albert Eckhout, attesting to the presence of European artists in early modern Brazil.

The section on the Baroque will feature superb examples of religious sculpture rendered in polychrome wood. The abundance of processional figures, ritual liturgical objects, and private devotional altars will emphasize the link between the performative and the spiritual nature of much of the art of this period. Among the artists in this section will be Frei Agostinho da Piedade, Manuel Inacio da Costa, Francisco Xavier de Brito, and the great master, Antonio Francisco Lisboa, known as Aleijadinho. It will also include an entire Baroque altarpiece from the Monastery of SÃ£o Bento in Olinda (northeast Brazil), recently restored and presented for the first time in a museum setting.

Interwoven throughout the exhibition will be fine examples of work by indigenous artists from early and modern times, including feather capes and other body adornments from the Amazonian and coastal peoples. The pervasive influence of Afro-Brazilian ritual and traditions will be represented by a large selection of objects ranging from 19th-century gold and silver jewelry, in which the inspiration from Africa is still strongly felt, to contemporary expressions by artists such as Mestre Didi, "GTO," Agnaldo dos Santos, and Rubem Valentin. The blending of indigenous and of Baroque traditions of woodcarving is observed in the large selection of popular objects from ex-votos (milagres) to the animal heads (carrancas) affixed to the boats that plied the SÃ£o Francisco River in northeast Brazil.

The modern section will explore the radical innovations in Brazilian art of the 1920s and 30s, including Tarsila do Amaral, Anita Malfatti, Lasar Segall, Emiliano Di Cavalcanti, Victor Brecheret, Vicente do RÃªgo Monteiro and Candido Portinari. The investigations of these artists, together with those of writers of the period, led to the Pau-Brasil and Antropofagia movements, and in turn, to a greater appreciation of the country's indigenous cultures and a rediscovery of the Baroque.

Adjunct Programming:
An extensive film festival, music program, and an array of education initiatives will be organized in conjunction with Brazil: Body and Soul. The fall series of Works & Process at the Guggenheim will focus on Brazilian music and dance, including choir music directed by George Steele and a performance showcasing the traditions of capoeira, CandomblÃ©, and samba. Education programs will include a lecture series featuring prominent Brazilian art scholars and a symposium entitled Brazil: Visual Culture Matters. Additional workshops, performances, and events related to Brazil: Body and Soul will be offered in conjunction with the opening of The Sackler Center for Arts Education in October 2001.

The film program, which includes Brazilian feature films, independent short works, documentaries, videos, and television productions, will explore the variety and extraordinary accomplishment, as well as the historical importance of Brazilian cinema. Featuring modernist masterpieces of the 1930s, chanchadas (parodic musical comedies) of the 1950s, films by Glauber Rocha and other key directors from the Cinema Novo movement, Brazilian telenovelas and innovative broadcast programs, and new films from the recent resurgence of Brazilian cinema, the program will reflect the dynamic and diverse range of Brazilian media production of the last 70 years. The guest curators, Robert Stam, Professor of Cinema Studies at New York University, and Ismail Xavier, Professor of Cinema Studies at the School of Communications, University of SÃ£o Paolo, are leading international scholars of Brazilian film and television. The series is organized at the Guggenheim by John G. Hanhardt, Senior Curator of Film and Media Arts, and Maria-Christina VillaseÃ±or, Associate Curator of Film and Media Arts.